What to Do in Athens to Travel to Ancient Greece?

When visiting a new destination, it is always hard to decide what you should do within the few days that you will spend there. When it comes to a country with vast history and immerse beauty like Greece, this becomes even harder. From inspiring walking tours with locals to checking out the ancient Greek sites, to authentic local experiences or mythology tours, there are so many choices! The best way to enjoy yourself and make the most out of your trip to Athens is to time travel back to the ancient times and experience the full glory of the Greek capital. So, here are ten things to do in Athens to time travel to the Age of Gods and Heroes! 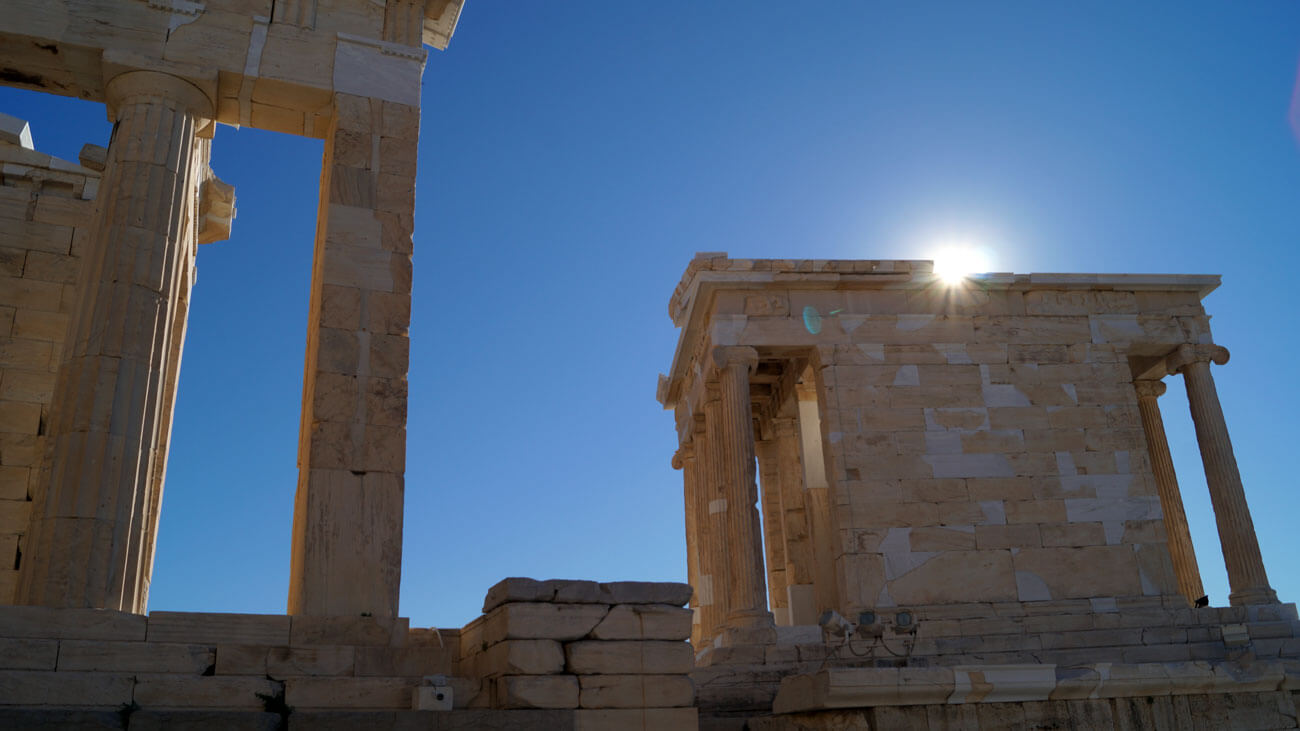 1. Start your day as an ancient Athenian

The first thing ancient Athenians would do before they start their day was to make "offerings" to a God or Goddess. Offerings was an important custom of the ancients who believed that in order to receive from their day they first had to offer. They would usually go under a tree and place on the base of it a few seeds, honey, milk or water. They were offering their gratitude to the Gods and Mother Nature and wished for a good and fruitful day. A great place to make a representation of this ancient Greek ritual is Philopappos Hill, across the Acropolis, which offers a great view of Athens and the Parthenon. To take it a step further, you can spend some time meditating following the ancient Greek technique, which aimed to the awakening of Memory. The serenity and energy of the Hill is ideal for that! 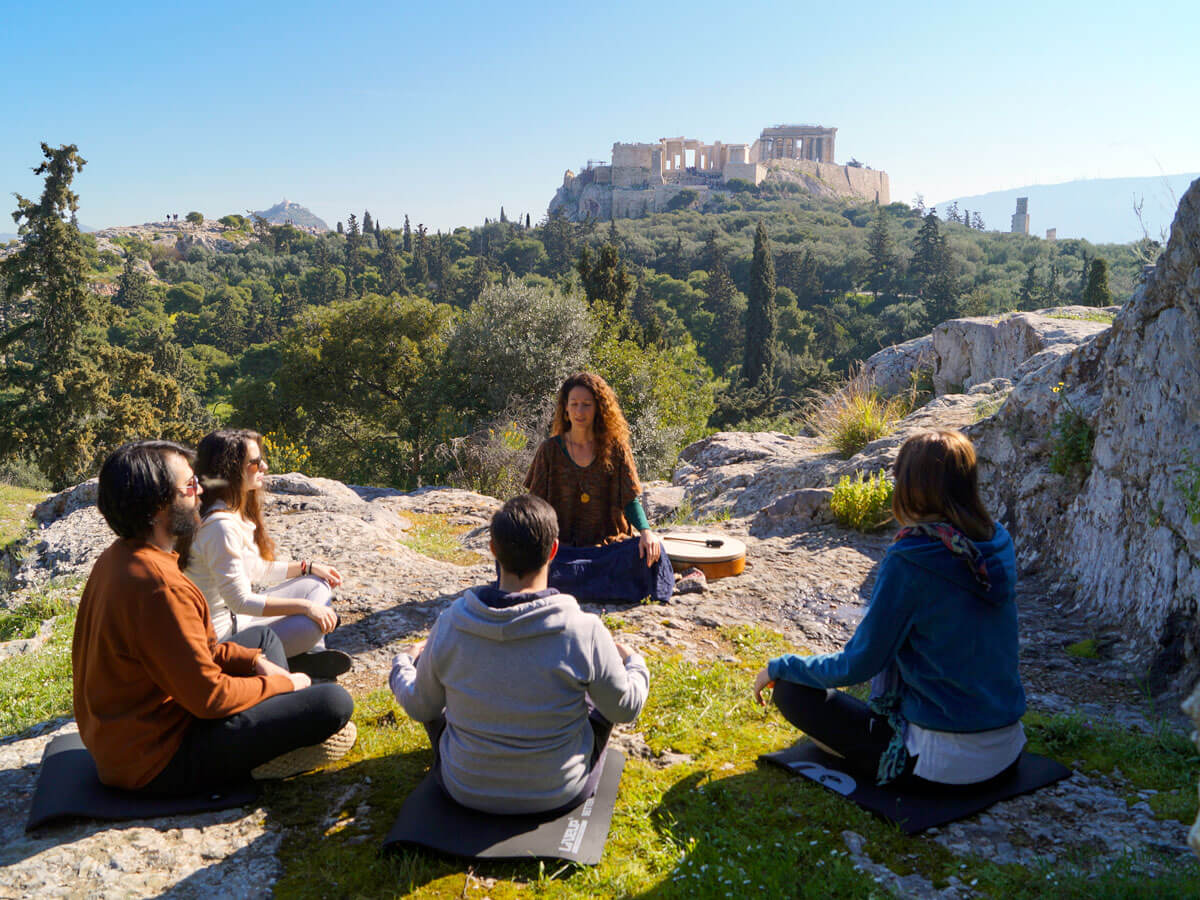 2. Exercise your right to vote at the birthplace of Democracy

It is well known that Athens is the birthplace of Democracy and one of the main reasons that the city became one of the greatest powers of the ancient world. A time travel to ancient Greece cannot be successful without a visit to the spot where the Athenians would held their assemblies. The Hill of the Pnyx is where great men of antiquity like Pericles, Themistocles and Cleisthenes delivered some of history’s most famous speeches. Having an insider with you to tell you stories from Classical Greece will surely bring the experience to another level, so consider booking a walking tour that stops at Pnyx. And make sure that you don’t miss the incredible city view from the Hill! 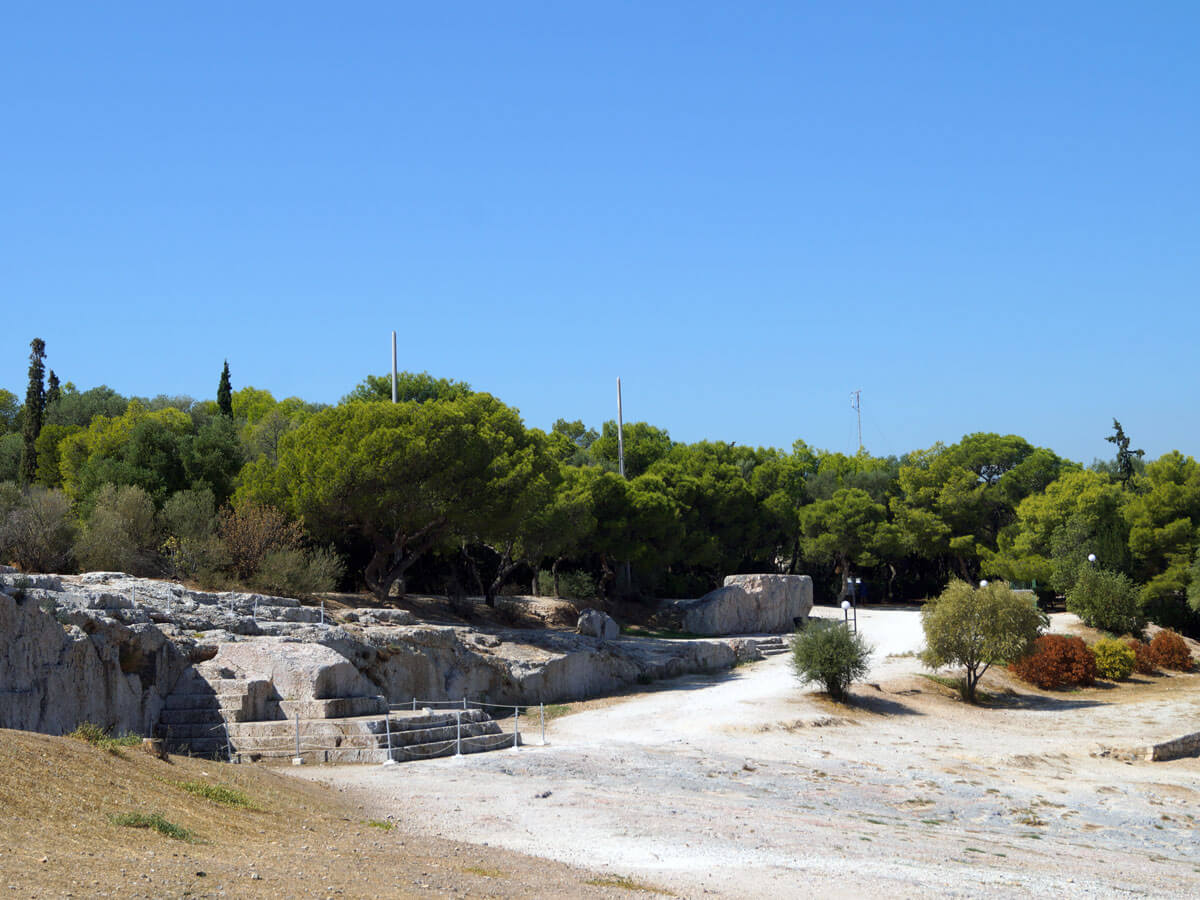 3. Get closer to your favorite Goddess, Athena

A time travel to ancient Athens cannot be complete without a visit to the Acropolis Hill and the Temple of Athena, the Parthenon. As a genuine ancient Athenian family, a pilgrimage to the Temple of your patron Goddess is a must! However, the Parthenon is not the only ancient building standing on top of the Acropolis Hill. Make sure that you see the Propylaea, the Temple of Athena Nike and the Erechtheion, which was actually the most sacred place on the Hill. Having a local guide explain to you the importance of those places to the ancient Greek society is really helpful. Most people get bored of the many historical and archaeological facts after a while, so make sure that you take a Mythology tour of the Acropolis instead. The tour can also include tablets with 3D virtual reconstruction technology that brings the Hill back to life! 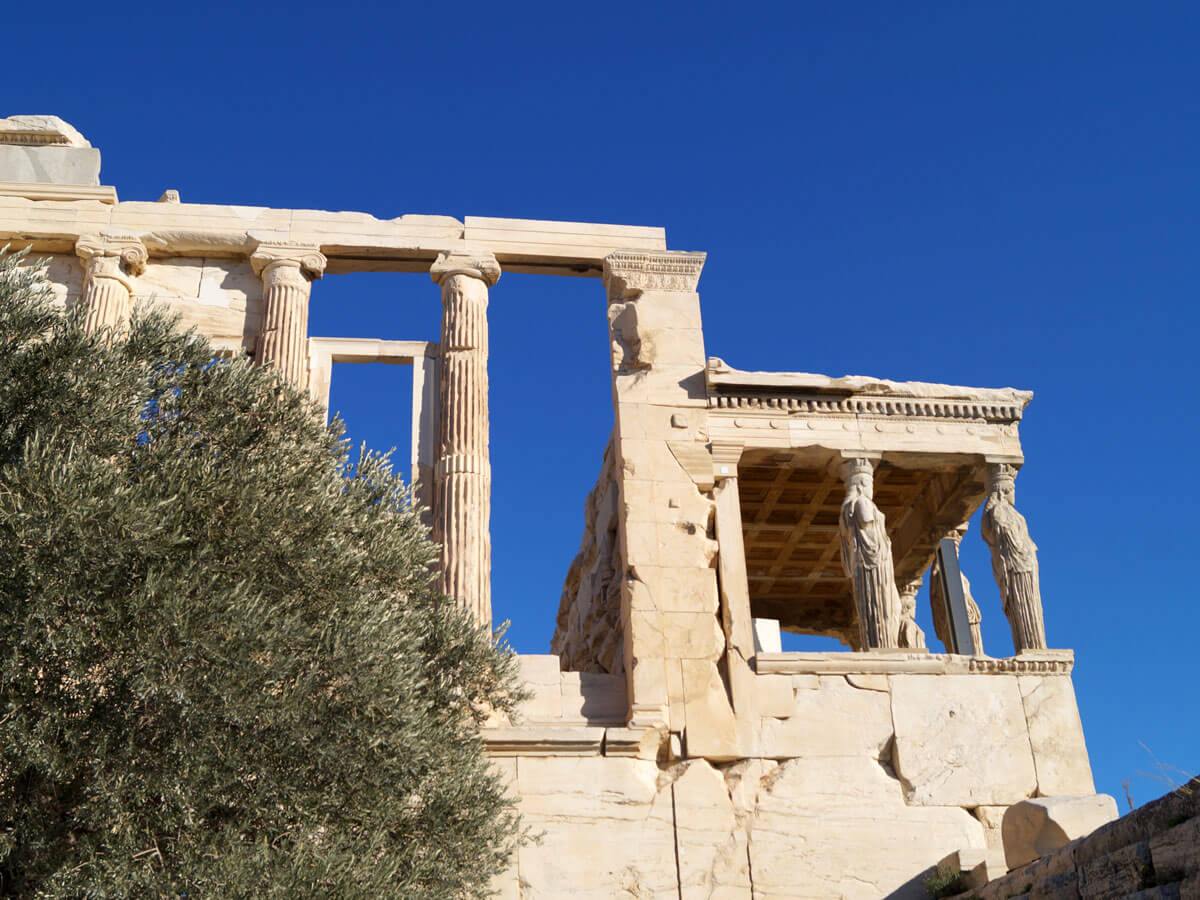 4. Become a juror at the ancient criminal court of Athens

Just across The Acropolis Hill, there is the Rock of Areopagus, literally a rock which housed the criminal court of ancient Athens. The Rock took its name from the Greek God of war, Ares, who was tried there by the other Olympian Gods for his war crimes. This is also where the great Greek philosopher Socrates was tried and found guilty for the charges of impiety and corruption of the youth. We learn from Plato, Socrates’ student, that the real reason behind Socrates’ conviction was his opposition against the practices of the Athenian Council (Ecclesia of Demos). The Rock offers an excellent panoramic view of Athens and is best to visit during sunset. Most of Athens walking tours include the Rock as a stop, so make sure that you find time to free the spirit of Socrates! 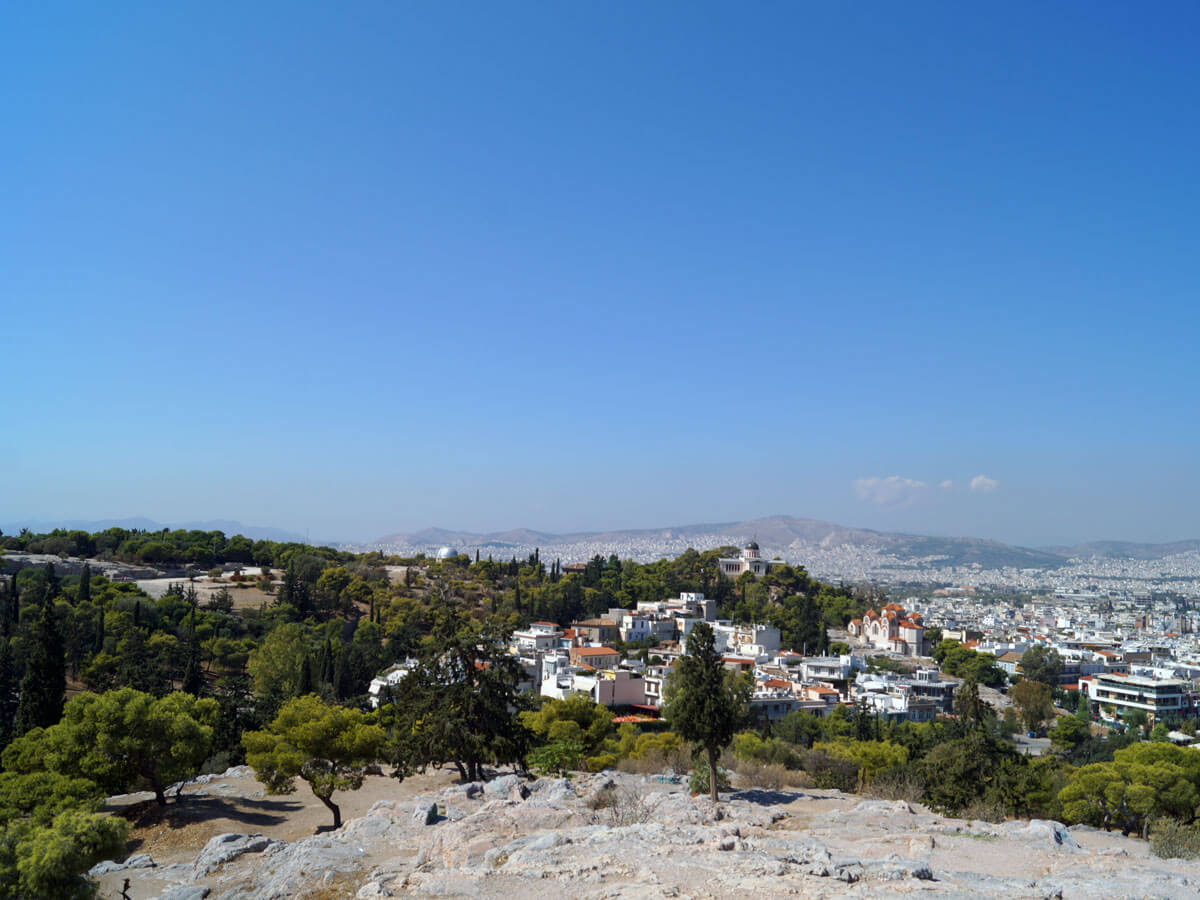 5. Spend a busy morning at the ancient marketplace

Visit the archaeological site of Ancient Agora, the place that was the heart of the commercial life of ancient Athenians. Walk on the spot where Socrates was philosophising with his friends and students; marvel at the amazingly preservable temple of Hephaestus; let your mind wander to ancient court cases and convictions at the ancient court of Heliaea; walk along the Panathenaic Way and bargain with the ancient merchants for a fresh fish from the Aegean Sea. You can spend a wonderful morning in Ancient Agora and time travel to the ancient times. Make sure to have a booklet with you about the history of the monuments or book a guided tour for a better experience. 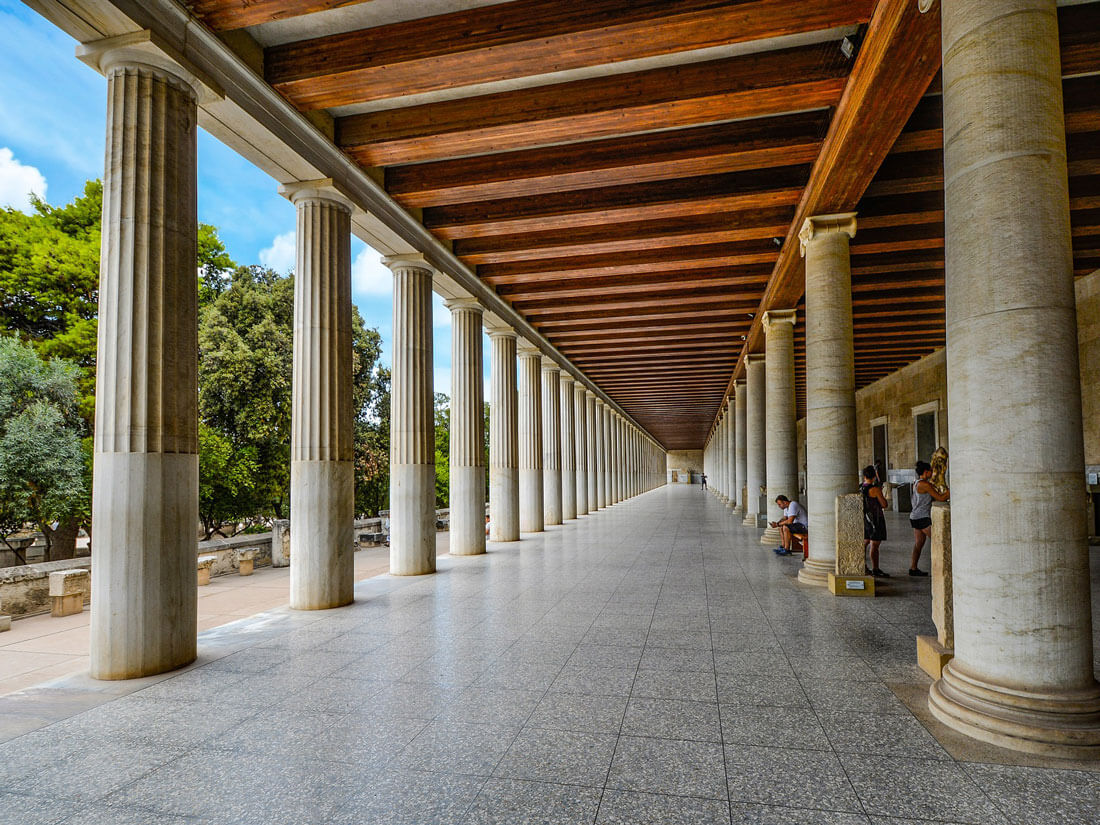 6. Visit the historical gateway to Athens

Exiting Ancient Agora, you can walk through the area of Thiseio, admiring all the merchants that are still there, thousands of years later. Enter the Kerameikos Ancient Cemetery, where men like Pericles were buried. The ancient cemetery was just outside the city limits. Kerameikos now, although in the center of the modern city, is literally an oasis, away from the hustle and bustle of the big metropolis. Wonder around the ancient tombs, learn about the ancient burial customs and pay your respect to the great men that contributed to the invention of Democracy and were buried there. Only a few meters away, you can find the remnants of ‘Dipylon’, the main gate to the ancient city and the biggest gate of the ancient world! Enter the ancient city and join the festivities for the start of the Great Panathenaic Games in honor of your favorite Goddess, Athena! 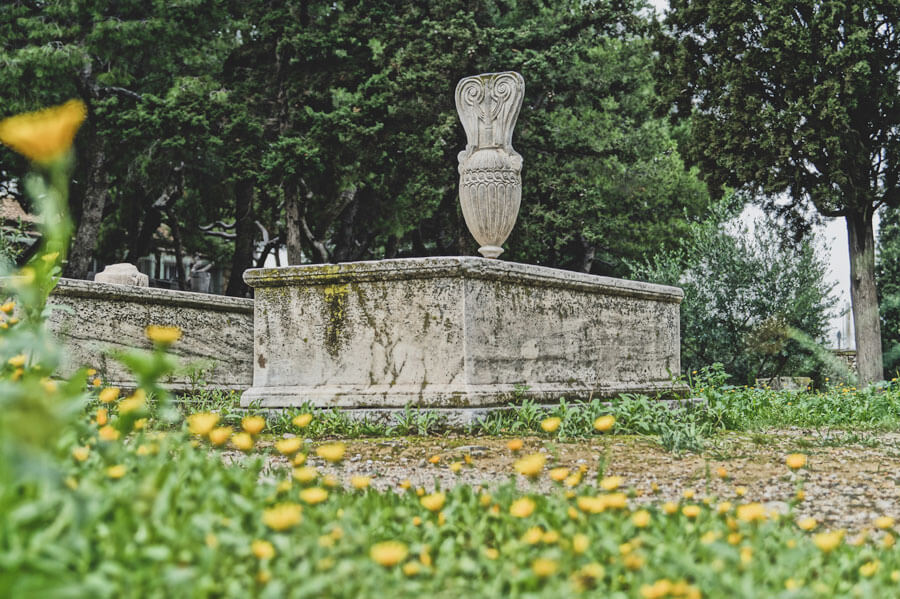 7. Get initiated into the mysteries of the ancient sacred rites

Take a short ride and visit the archaeological site of Eleusis, the heart of the Eleusinian Mysteries. The Eleusinian Mysteries were the most sacred and secret religious rites in ancient Greece. According to their mythological explanation, the Mysteries were established by Goddess Demeter and those who were successfully initiated would no longer fear death. Prominent men of antiquity, like Plato, Pythagoras and Roman Emperor Hadrian, were initiated into the Mysteries. The Mysteries managed to keep their secrets for more than 1500 years and till today no one really knows what was really taking place inside the adyton, the inner chamber of the Temple. And there is a good reason for that: speaking about the mysteries was punishable by death! Make sure to visit Eleusis, see one of the ancient gates to the Underworld, the Kindgom of Hades, and try to unlock the Mysteries! 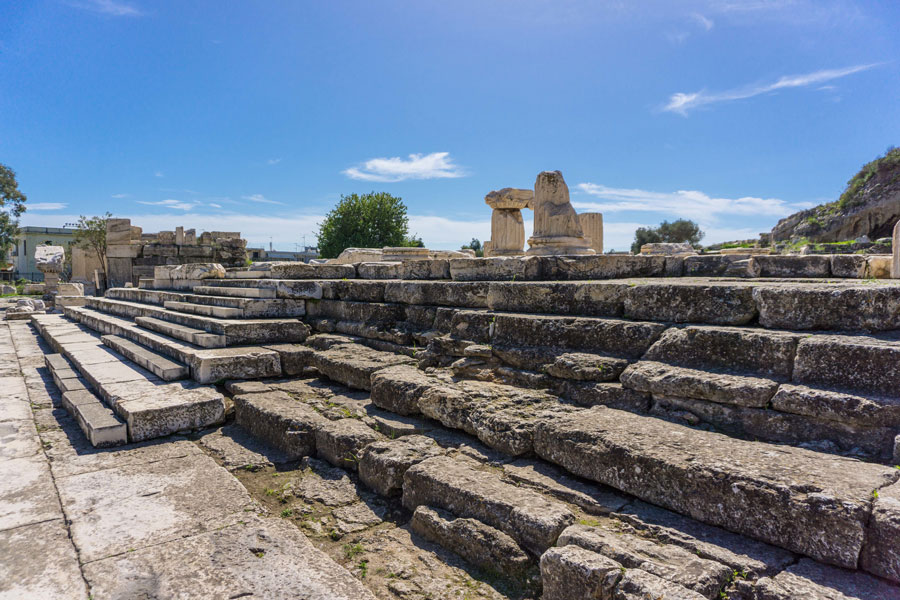 8. Follow the footsteps of great men of the past

Take a stroll at the oldest neighbourhood of Athens, Plaka, and walk the street of Tripodwn, where Pericles allegedly met the love of his life, the famous courtesan Aspasia. Then find your way to the ‘secret’ neighbourhood of Anafiotika, under the gaze of Athena from her temple above. Reach a spot with a panoramic view of the city and look at its sacred hills. Try to picture the city as it must have been thousands of years ago. 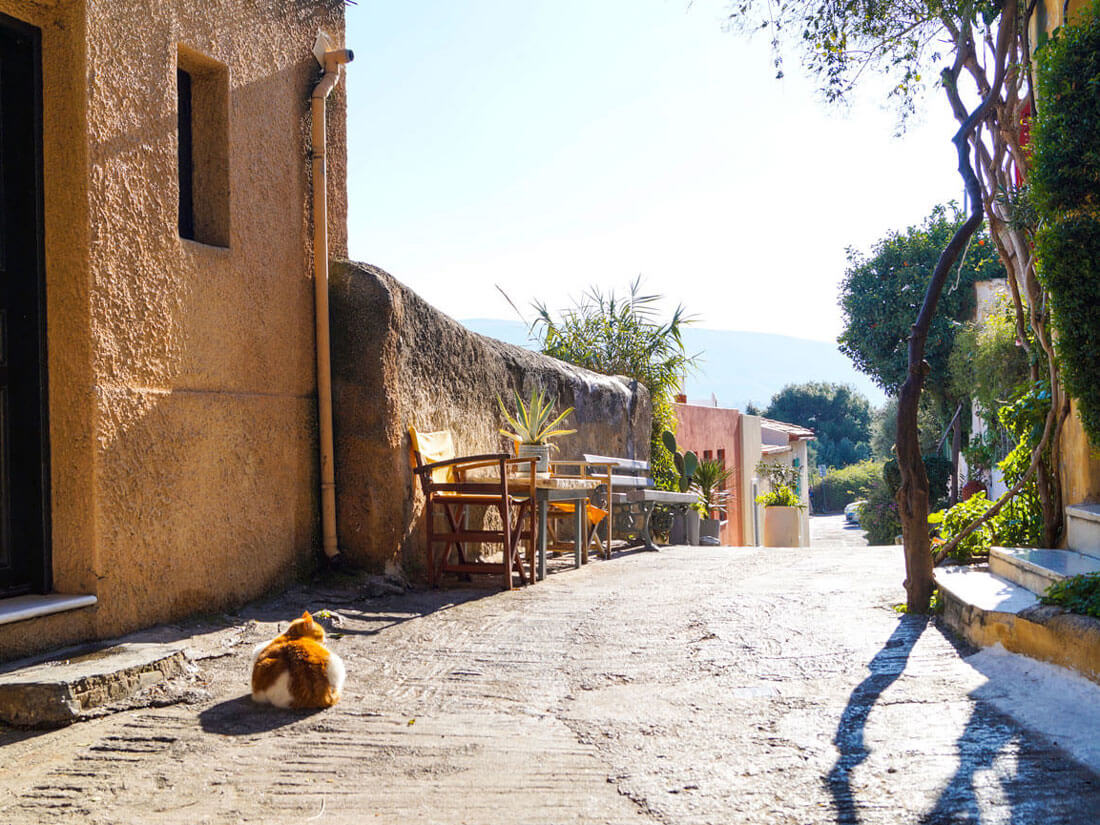 9. Get inspired by the art and achievements of the Ancients

Visit the National Archaeological Museum and marvel at the ancient artifacts, discuss about the standards of beauty and philosophise about the meaning of beauty then and now. Get inspired by the Ancient Greek Art and try to understand the mechanisms behind the oldest computer of the world! Discover lost and found treasures of the Greek sea and what secrets they may hold. 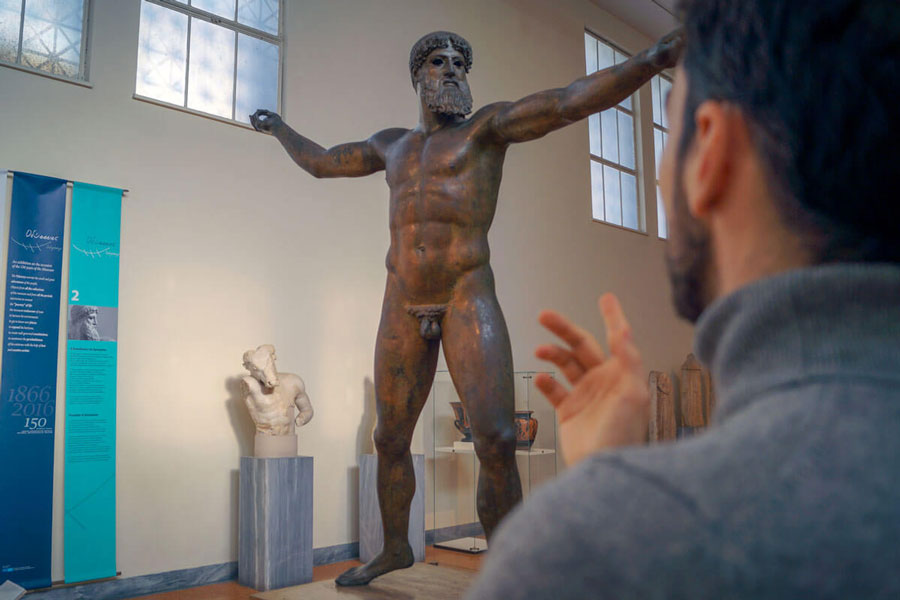 A time travel to Ancient Greece would not be complete without tasting the food of the Ancients! Ancient Greek diet has influenced to a great extent the Mediterranean cuisine and strolling around Athens you can find many local delicacies that have their routes to Ancient Greece. Join a local food tour and discover the scents and flavors of ancient and modern Athens! 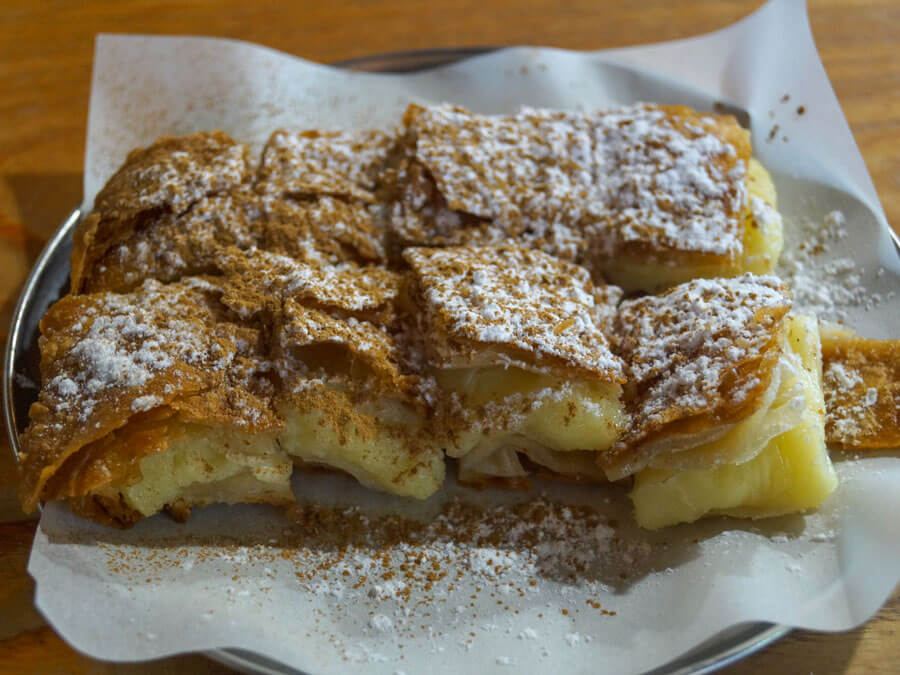 Bonus idea: Finish your day dining and partying like an Ancient, in a Symposium!

Ancient Greeks loved to gather in the evenings at friends’ houses. They would dine, drink wine, philosophise, listen to music and, not rarely, indulge in sexual acts. While in Athens, gather with your friends or family in a Symposium room, taste authentic ancient snacks, drink wine produced with the ancient Greek venification technique, listen to ancient Greek music and philosophise like Plato and Socrates! 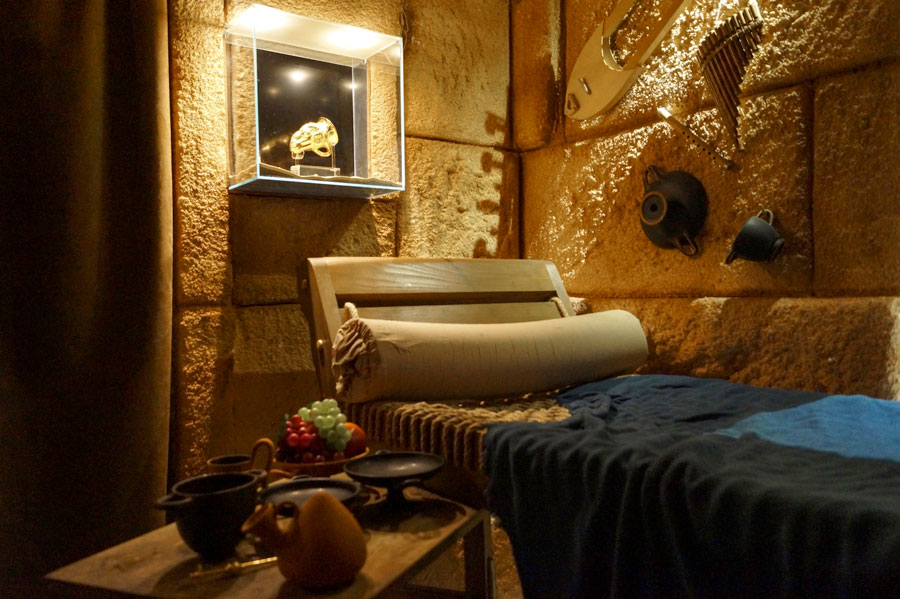 How Athens got its name: The name-giving myth
Eat Like a Local in Athens: 5 Rules to Follow
The Hills of Athens and the Myths Connected to them
Greek Mythology Monsters: Full list and description
Castles of Peloponnese: Discover Medieval Greece
Greek Mythology Books you need to read (for adults & kids)
Best Places to Eat in Athens - Food Guide (by Locals)
Merry Belly! Authentic Greek Christmas Meal (with recipes)
Hercules: The Life and Labors of the Greek Hero
One day in Athens: How to make the most of it
The Greek Gods: Full List and Background
Athens in October: Reasons to Visit Athens This Month
The Parthenon: 10 Surprising Facts about the Temple
Creating your Dream Vacation with Tailor-made Tours in Greece
Day Trips from Athens - Where the Locals Go
Caryatids: The Daughters of Athens
Monastiraki: Complete Guide and Things to Do
The Buried Rivers of Athens
300: Movie Vs. Reality
Athens Cultural Highlights Off The Beaten Path
Athens City Break For Foodies
6 Greek Myths to Know Before Visiting Athens
10 Landmarks and Monuments You Should Not Miss in Athens
Greece from Home: 10 Ideas for a Virtual Athens Tour
Books on Greek Food and Culture That We Love
The Apple of Discord and the Fairest of Them All
20 Most Famous Greek Mythology Movies
The Panhellenic Games of Ancient Greece
Basic Greek Words to Know Before Traveling to Greece
Interview With a Local: Ancient Greek Rituals and the Alternative Athens
The Delphic Idea
Meet the Olympian Gods
The Great Plague of Athens: Lessons from the Past
Best Walking Tours in Athens, Magical Walking Routes
Private Tours in Athens: The Benefits of Booking in Private
Acropolis Tour: Why a Guided Tour is Necessary
9 Things to Know About Eleusis The European Capital of Culture 2023
Battles of Ancient Greeks That Shaped Western Civilization
The Best Places to Enjoy Vegan Food in Athens
9+1 Unique Things to Do in Athens this Summer for Free
Interview With a Local: Athens Through the Prism of Art
The Role of Greek Mythology in the Creation of Athenian Wonders
Mysteries of Ancient Greece You Didn't Know About
10 Reasons Why You Should Join a Food Tour in Athens
Athens for Instagrammers: The Top 30 Photo Locations in Athens
Top 10 Alternative Destinations in Greece
The 10 Best Places to Visit in Greece
10 Sights to Tour in Athens and Bring Greek Mythology to Life
Top 10 Tips to Know Before Traveling to Athens
10 Things to Do in Delphi Home to the Oracle of Apollo
Symposia in Ancient Greece: Reviving the Ancient Custom
30 of the Most Famous Tales from Greek Mythology
Interview with a Local: Greek Neoclassicism and the Unseen Athens
10 Things you didn't Know about Ancient Greeks
48 Hours in Athens: Full Itinerary by Locals - Greek TravelTellers
10+1 Traditional Greek Foods and Drinks to Try when you Visit Greece
10+1 Things to Do in Athens on a Rainy Day
Alternative Things to Do in Athens: Getting Off the Beaten Path in the City of Wonders
Christmas in Athens: Top Things to Do and Know
December in Athens: 4 Reasons why you Should Choose this Month for your Greek Getaway
Interview with a Local: Greek Gastronomy and Athens for Foodies
How to Travel in Greece Differently: a Guide for Delving Deeper into the Greek Culture