The Apple of Discord and the Fairest of Them All

Who doesn't remember the Evil Queen in Snow White, standing in front of her mirror and asking "mirror mirror on the wall, who is the fairest of them all?". I'm sure all of us have, at least once, asked that question to our mirror (and I do hope the answer you got was better than the one the witch received), but how far back do you think this search for self-affirmation goes? Well, it goes all the way back to the Olympian Gods and Greek mythology!

Before we delve deeper into the philosophical meanings behind the myths and fairytales, let’s share a piece of information that is probably unknown to most people: the marriage of Peleus, king of Phthia, with the sea nymph and leader of all Nereids, Thetis, was the spark that set in motion the events that would lead to the Trojan war!

Many years ago, in the ancient times, when the mighty Greek gods inhabited Mount Olympus, Zeus decided to marry the king of Phthia, Pileus, with a sea fairy, Thetis, the daughter of Nereus. The wedding took place in Pelion and all the gods and goddesses were invited. Only Eris, the goddess of quarrel, was not invited, for obvious reasons… Wherever she went she was spewing hatred and brawls. After realizing that she was not invited to the wedding, she became furious. She picked a golden apple from the Garden of the Hesperides and went to the banquet invisible. She arrived right on time for the feast and went straight to the table where the Olympians were sitting. She tossed the golden apple in the middle of the table, with the inscription “to the fairest one”. 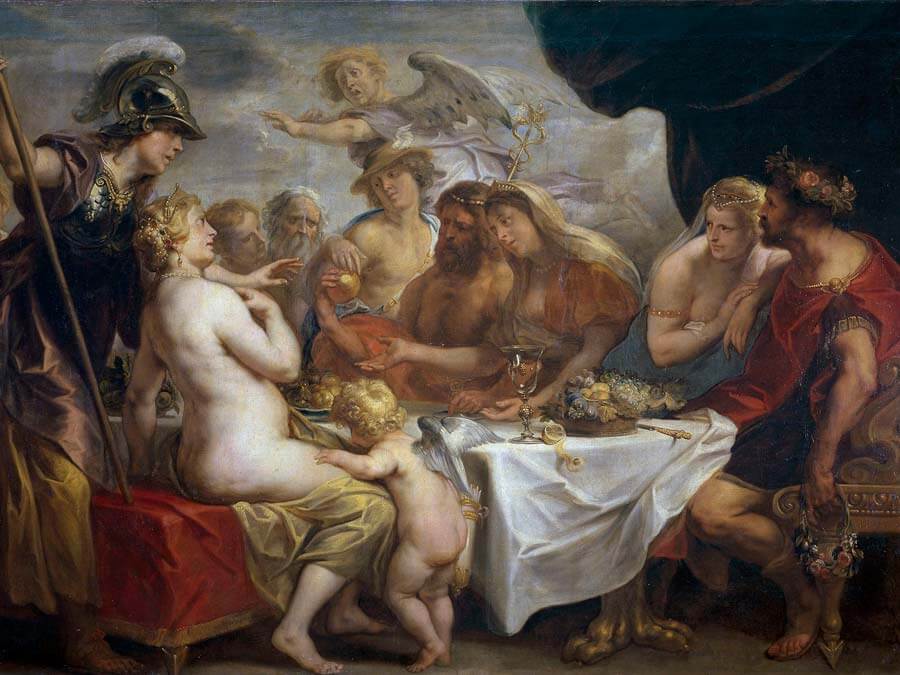 Immediately, three goddesses sought to claim the apple: the goddess of marriage and family, Hera; the goddess of wisdom and justice, Athena; and the goddess of beauty and love, Aphrodite. They began to argue about who was the fairest and most worthy to own the apple. Zeus was asked to choose, but he knew better… He did not want to upset any of the three goddesses. Instead, he came up with an idea. He told them that a mortal man who has recently shown his exemplary fairness in a contest was the most suited to judge their case. That man was Paris, son of King Priam and the prince of Troy, who was unknown of his true identity at the time and was living as a shepherd on the mountain of Idi, near Troy. The myth known as the ‘judgment of Paris’ followed.

The Messenger God, Hermes, guided the three contenders to Idi and appeared before the stunned Paris. After informing him of Zeus’ will, Paris looked at the three goddesses but could not decide. Failing to gain his vote, the three goddesses stripped nude to convince the mortal prince of their beauty. While Paris was inspecting them, each one of them offered him a gift, trying to bribe him with their powers. First, Hera promised him to make him King of Europe and Asia. Then, Athena offered him wisdom and skill in war. Finally, Aphrodite promised him the most beautiful woman on Earth (hard choice, we know). 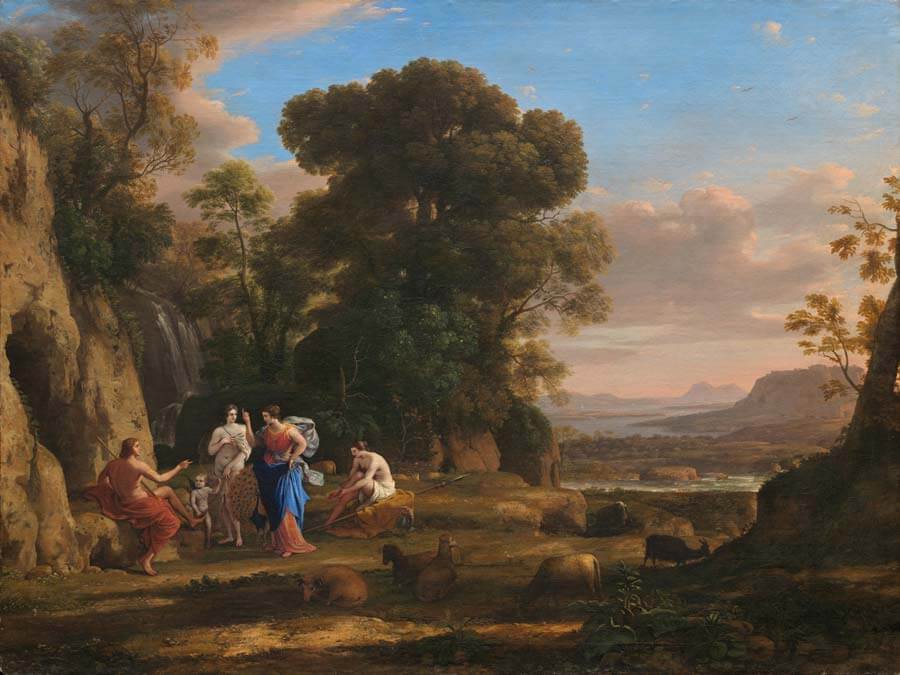 Paris, after serious contemplation, gave the golden apple to Aphrodite, accepting her gift. Hera and Athena left the scene in anger, while Aphrodite revealed to Paris that Helen, the wife of Menelaus, King of Sparta, was the most beautiful woman in the world. After claiming his rightful position as Prince of Troy, Paris set sail for Sparta and arrived at the palace of Menelaus with rich gifts. With the help of Aphrodite, Paris persuaded Helen to follow him to Troy ('persuaded' might not be the right word; 'abducted' might be more appropriate, depending on the version of the myth you like the most). This act resulted in the most epic war of all time, the Trojan War, that lasted ten years!

Fun fact! In Greece, we use the phrase "apple of discord" to refer to a much-desired object or person by two different people, which may result in a quarrel between them. 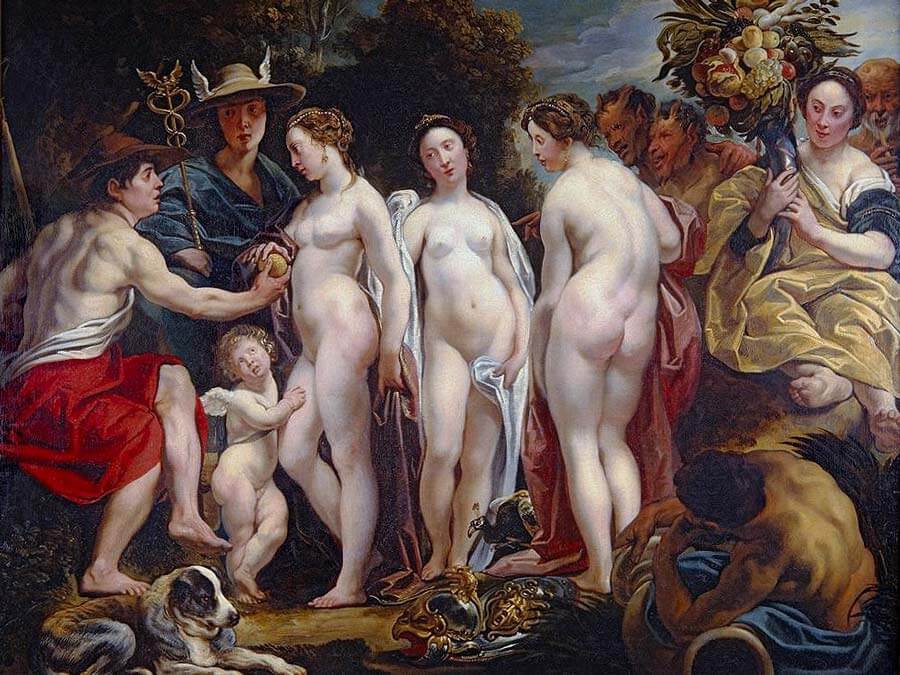 Vanity or the longing for true love?

Someone would blame Eris, the goddess of quarrel, for all the tragic events that followed and the countless souls that ended up to the Underworld. But according to Euripides and the mentality of his contemporaries, everything is random and only your own actions are responsible for the outcome of your life. Contemplating a bit more the tricks of the Three Sisters of Fate, one could point out that Zeus’ act of not inviting Eris in the wedding out of fear that she might start a quarrel is what actually killed the buzz and started an epic war… Looking more into choices, Eris left the apple on the table and Zeus was the one to implicate Paris on the quarrel. But in the end, it was Paris’ choice to take up on the offer or not. And he did. Was it vanity? 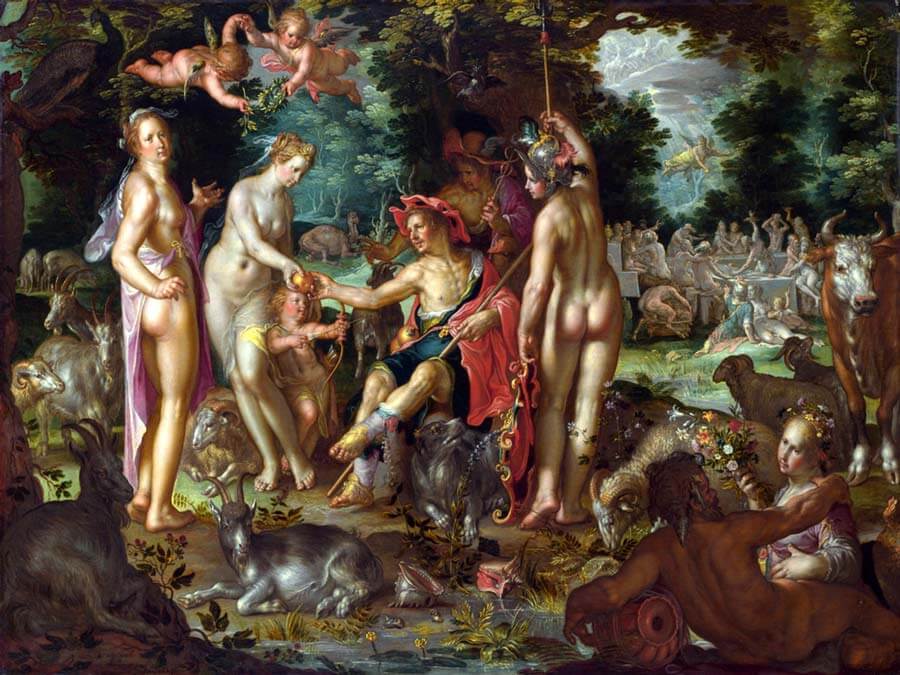 Maybe the fact that three great goddesses were hanging by his word was fueling his ego. Or maybe it was vanity from their end; a reflection of human nature to be the best or the most capable, the need for self-affirmation. Whatever the reason, Paris chose Aphrodite. Paris knew that Helen had free will and whatever the goddess promised to him, he had to act to make it happen. It was his choice to pursue the love of Helen and not Aphrodite’s. Why did Paris choose to do it? Was it because of his own need for self-affirmation or perhaps something even greater? The pursuit of happiness; the longing of his one true love; a happy ending in a nonetheless cruel life with wars, hunger, backstabbing and games of power? Maybe what Paris really wanted was a companion to grow old with. Nonetheless, the Ancient World was very much dependent upon honor and what Paris did was not at all honorable. So the war happened and great heroes rose and fell. 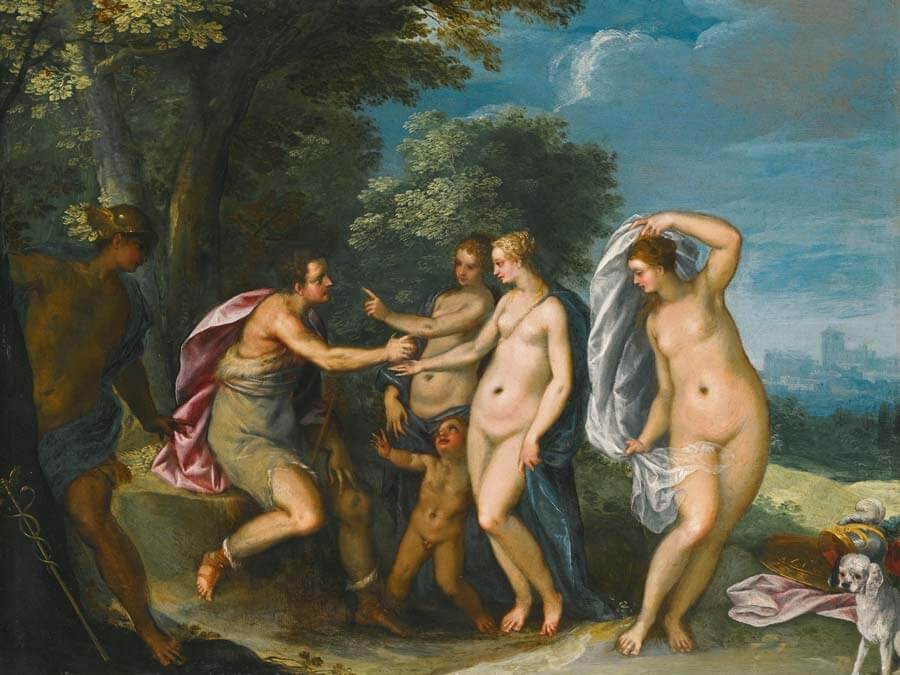 The apple as a symbol

In myths and fairytales, from Paris and Helen to Adam and Eve and the Evil Queen of Snow White, the apple accompanies many stories of humankind. In these stories, it represents either virtues or defects, luck or misfortune, and opportunities for evolution or destruction. Its spherical shape and its central point call for an interpretation similar to the center of the earth; that is, the concentration of all forces into a single point. So, if in our subconscious the apple is so powerful, then, is it accidental that the stories were defined by the apple’s “will’’?

How does the apple trap someone? Let us examine the stories: as soon as Paris gave the apple of Eris (or the Apple of Discord) to Aphrodite, the apple had a force of its own and set the course for hundreds of people’s fate. The enchanted apple through which the innocent Snow White submits to the evil witch's spell defines the whole story of that fairytale. When we look into Christianity, the apple is there with the first man and the first woman. Eve offers the apple to Adam. He eats it and they both immediately become sinful. 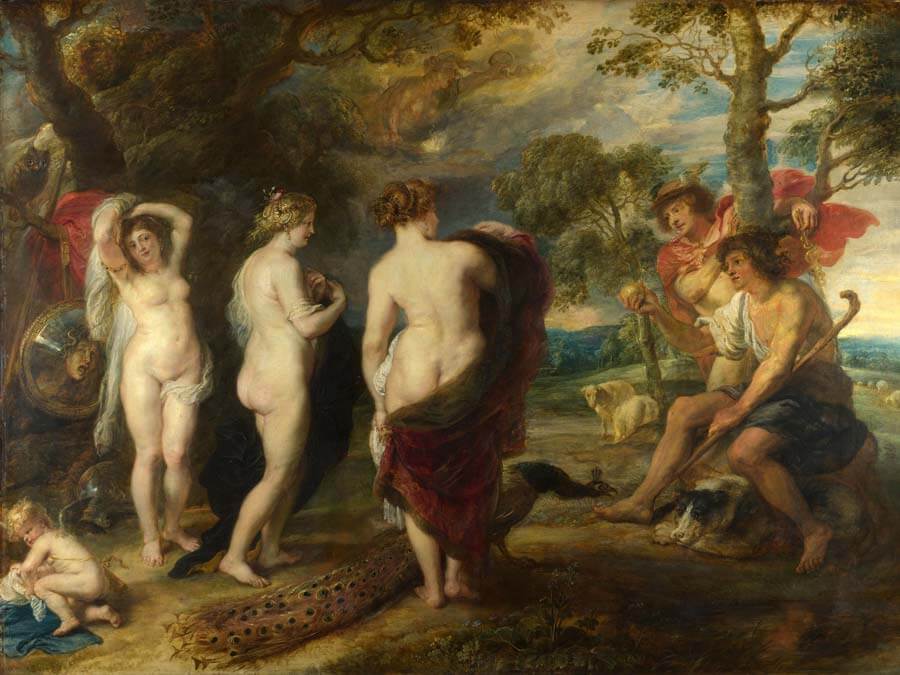 The apple is the fruit of the tree of knowledge and therefore a symbol of knowledge. Another symbolism of the apple is immortality. Legends surrounding Alexander the Great mention that, while the Greek King was searching for the Water of Life in India, he found apples instead that supposedly extended the life of priests on earth. In Norse mythology, the apple is considered the fruit of rebirth and whoever eats it is reborn. The Viking gods eat it and remain young until Ragnarök, that is, until the end of the current cycle of the world. In some British short stories, it is said that if one eats an apple they become the prologue of a prophecy. In short, the symbolism of the apple places humans in the center of their endless possibilities of choices. 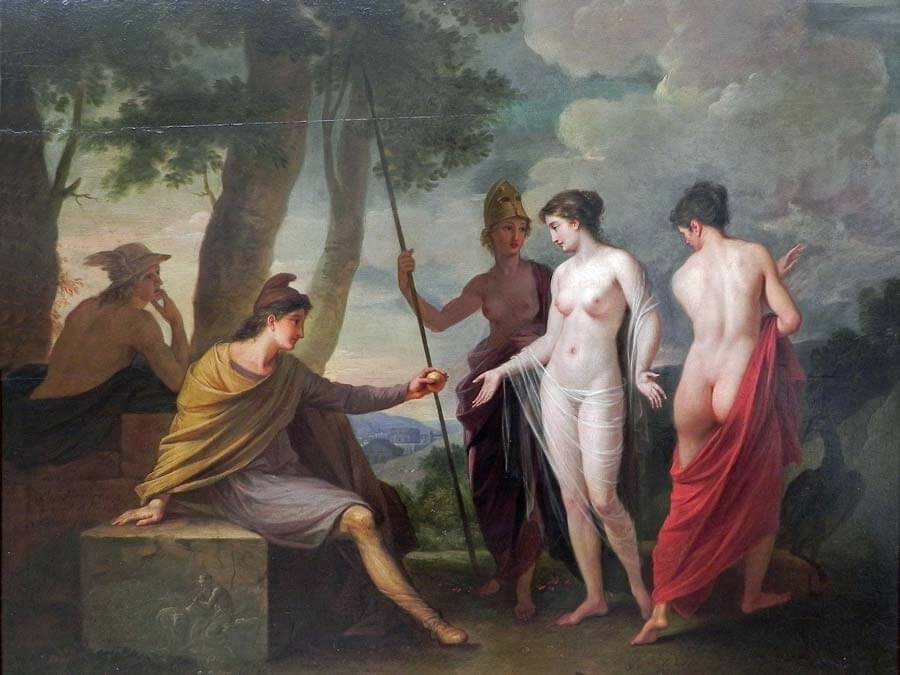 Women in ancient Greece: The role of women in the Classical Period
Best Time to Visit the Acropolis and Why
The Most Famous Greek Dances (video)
One Day in Hydra: Best Things to Do (Insider Guide)
Kallos: The Ancient Greek Ideal for Beauty
Sparta: Things to do and see in the Greek city
A Sightseeing Itinerary for your Holiday to Mykonos
Things to Do in Athens: The ‘must-see’ and the local vibes
Customs in Ancient Greece Associated with September
How Athens got its name: The name-giving myth
The Hills of Athens and the Myths Connected to them
Greek Mythology Monsters: Full list and description
Castles of Peloponnese: Discover Medieval Greece
Greek Mythology Books you need to read (for adults & kids)
Hercules: The Life and Labors of the Greek Hero
The Greek Gods: Full List and Background
Athens in October: Reasons to Visit Athens This Month
The Parthenon: 10 Surprising Facts about the Temple
Creating your Dream Vacation with Tailor-made Tours in Greece
Day Trips from Athens - Where the Locals Go
Caryatids: The Daughters of Athens
The Buried Rivers of Athens
300: Movie Vs. Reality
6 Greek Myths to Know Before Visiting Athens
10 Landmarks and Monuments You Should Not Miss in Athens
Greece from Home: 10 Ideas for a Virtual Athens Tour
20 Most Famous Greek Mythology Movies
The Panhellenic Games of Ancient Greece
The Delphic Idea
Meet the Olympian Gods
The Great Plague of Athens: Lessons from the Past
Best Walking Tours in Athens, Magical Walking Routes
Private Tours in Athens: The Benefits of Booking in Private
Acropolis Tour: Why a Guided Tour is Necessary
9 Things to Know About Eleusis The European Capital of Culture 2023
Battles of Ancient Greeks That Shaped Western Civilization
The Role of Greek Mythology in the Creation of Athenian Wonders
Mysteries of Ancient Greece You Didn't Know About
Top 10 Alternative Destinations in Greece
The 10 Best Places to Visit in Greece
10 Sights to Tour in Athens and Bring Greek Mythology to Life
Top 10 Tips to Know Before Traveling to Athens
10 Things to Do in Delphi Home to the Oracle of Apollo
Symposia in Ancient Greece: Reviving the Ancient Custom
30 of the Most Famous Tales from Greek Mythology
Interview with a Local: Greek Neoclassicism and the Unseen Athens
10 Things you didn't Know about Ancient Greeks
10+3 Things to Do in Athens on a Rainy Day
10+1 Things to Do in Athens to Time Travel to Ancient Greece
How to Travel in Greece Differently: a Guide for Delving Deeper into the Greek Culture