Type to Search
The Delphic Idea

At the southern foothills of Mount Parnassus, in a serene and at the same time imposing landscape, the two eagles that Zeus launched from the two ends of the world met to find the center of the world. Delphi was the most important religious center in Ancient Greece. Thousands of people, from commoners to Kings, would travel to the Sanctuary of Apollo to listen to the oracles of Pythia. Steadily, the Omphalos of the world gave birth to a powerful idea that is known today as the ‘Delphic Idea’.

The Sanctuary of Delphi was a place of worship at first of Mother Earth (mother of gods and humans, but also the source of life in the world). It later became the Sanctuary of Apollo, the god of light, music and dance, after the Olympians replaced the primordial gods. Under the protection and administration of the Amphictyony League (a religious association of ancient Greek cities), the Delphic sanctuary ensured its autonomy and increased its religious status and political influence in the Mediterranean world. Once a year, people from all over the Mediterranean would travel to Delphi to pray and connect. For some, this travel would last for months.

Great gatherings need great events to excite the public and Delphi had its own festival: the Pythian Games! The Pythian Games were one of the four Panhellenic Games of Ancient Greece. They were held two years after each Olympic Games, and between each Nemean and Isthmian Games. They were held in honor of god Apollo, supposedly after he slew the mythical dragon Python and set up the oracle at Delphi. Initially, the games consisted of art and dance competitions, and later athletic competitions were added. The winners were crowned with a wreath of bay laurel, sacred to Apollo. 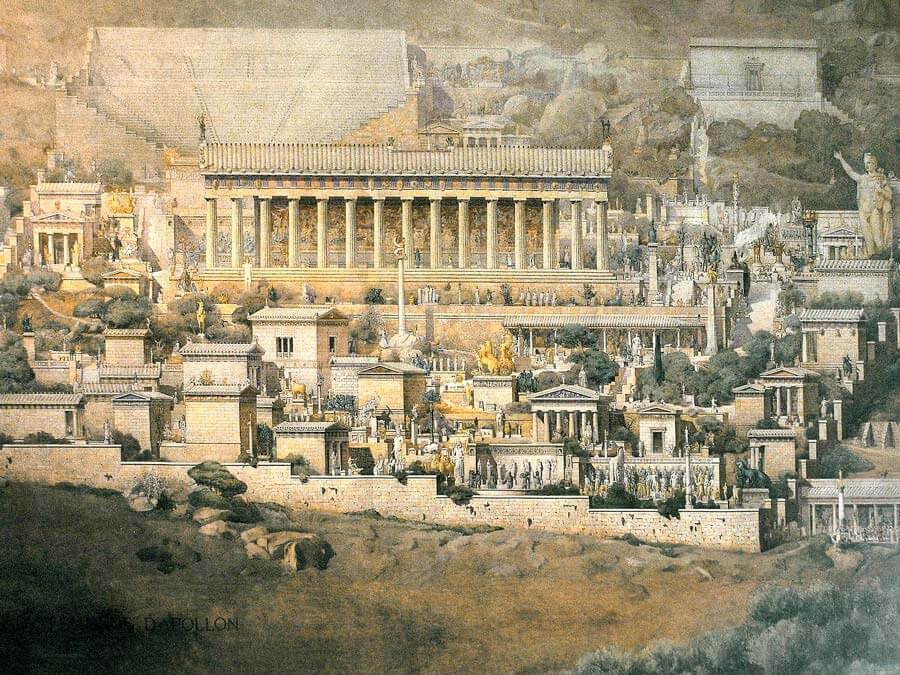 Six months before the start of the Pythian Games, nine citizens from Delphi, called Theoroi, would start traveling across the Greek cities to announce the beginning of the games and to declare the start of the Sacred Truce (Hierominia), aiming to protect the athletes and the travelers that would travel to Delphi. Any city that would be involved in robberies or armed conflicts during that period would be banned from the games and the sanctuary of Apollo, unable to consult the Oracle. After the fall of the Greek city-states to the Roman and later the rise of Christianity in the 4th century AD, Delphi remained an active sacred (now pagan) site and the Pythian Games were celebrated at least until 424 AD.

Unfortunately, after that time, sources about Delphi and the sanctuary were not found. Eventually, the Sanctuary of Apollo got buried under the mountains from too many earthquakes. Centuries later, new residents found their homes there, over the ancient ruins. Lord Byron visited Delphi in 1809:

"Yet there I've wandered by the vaulted rill;
Yes! Sighed o'er Delphi's long deserted shrine,
where, save that feeble fountain, all is still."

After the modern village of Delphi was partially destroyed by another earthquake, the villagers were eventually relocated to a new area and excavations started. Slowly, the most important archaeological site of the Greek word started taking shape before the archaeologists’ eyes. After its glorious revelation, a new idea began to take shape. The idea of peaceful coexistence of different people in antiquity under a common purpose and the interchange of knowledge and culture functioned many centuries later as a source of inspiration for the Greek poet Angelos Sikelianos (1884-1951) and his American wife, Eva Palmer, to give birth to the Delphic Idea. 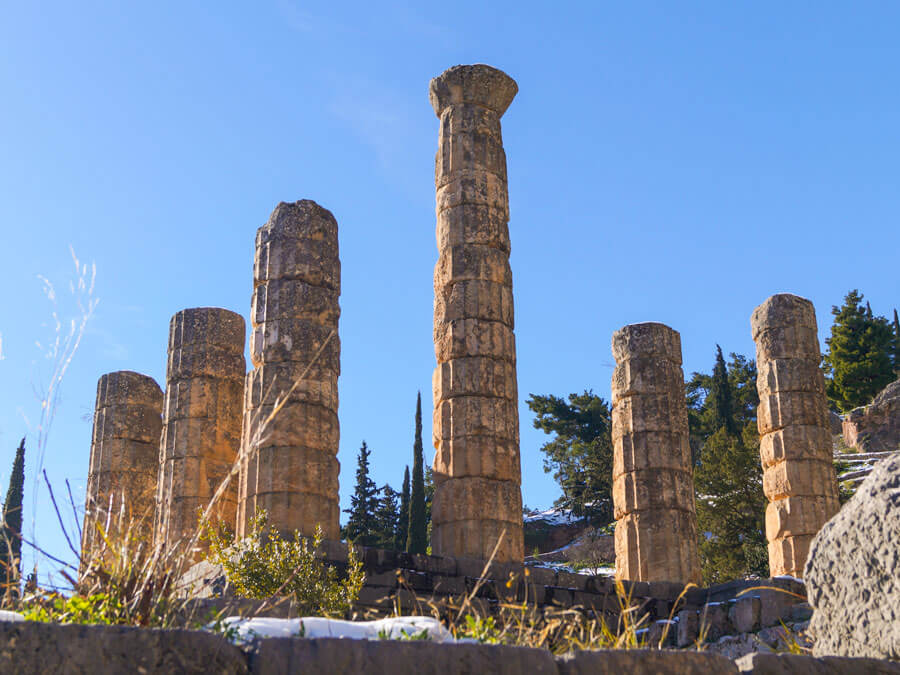 In the Delphic Idea envisioned by Sikelianos, the ancient but at the same time always current universal human values of Ancient Greek civilization were concentrated: freedom, humanity, brotherhood, peace, prosperity and unity. The Sikelianos couple believed that Delphi could serve as a focal point for solidarity of people all over the world and for the preservation of classical, universal values, like the strengthening of a harmonious and peaceful coexistence and the interdisciplinary interaction of culture, art and modern technologies in science.

Sikelianos and Palmer attempted to put into practice the Delphic Idea with the Delphic Festivals. Two festivals were held in Delphi, one in 1927 and the other in 1930, both funded by the couple. People from all over the world arrived in Delphi and participated in events, similar to the original events that were taking place in the Delphic Games of antiquity. An ancient Greek tragedy was performed in the ancient theater of Delphi; athletic competitions in the ancient stadium took place; but also musical and dancing events and lectures about the value of the art of loom and the importance of folk art. During those two international festivals, Delphi became once again the Omphalos of the World. 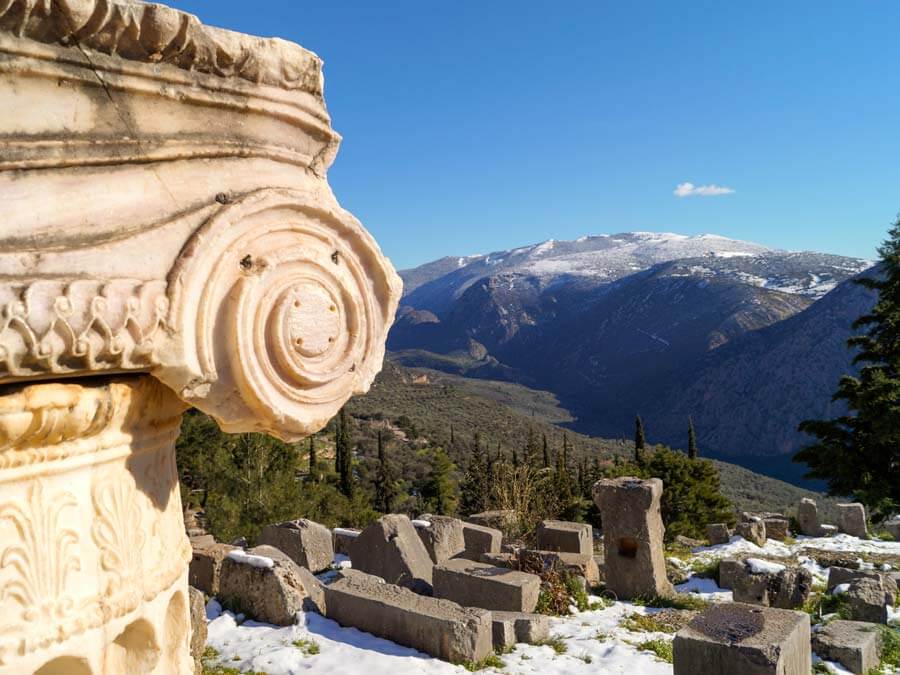 Unfortunately, the couple had little support and their vision was not fulfilled. But the seed of their vision, the Delphic Idea, was planted in many people’s heart. Today, the European Cultural Centre of Delphi (ECCD) and the Museum of Delphic Festivals (formerly the home of Angelos and Eva) maintain the faith and hope that one day Delphi will become a worldwide intellectual center. Moreover, the International Delphic Academy is a non-profit organization with the goal of spreading the Delphic Idea by establishing an international scientific academy base in Berlin and a workplace in Delphi. 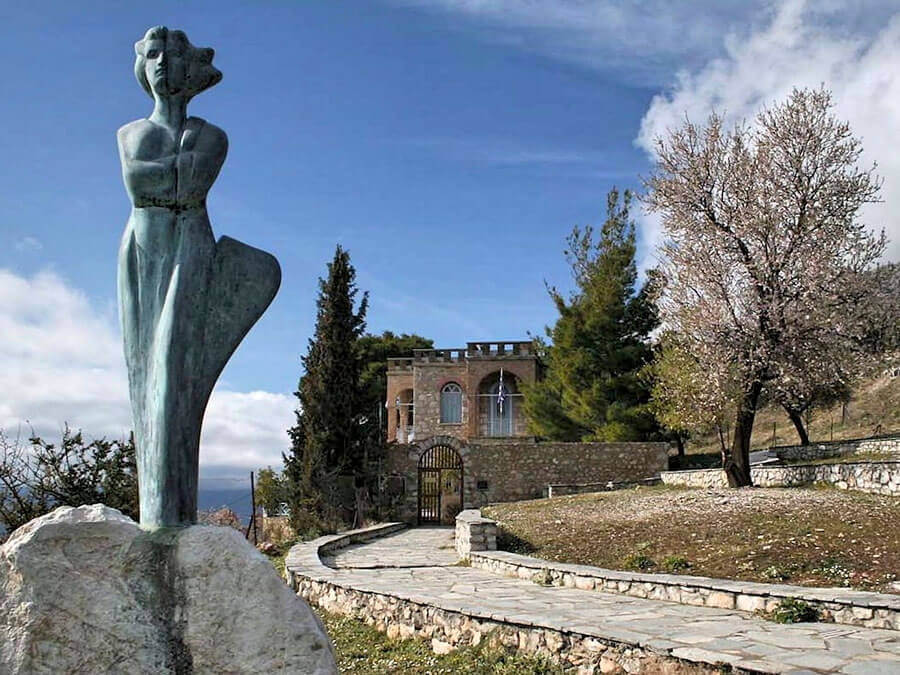 Delphi, as mentioned above, had established the first Amphictyony League, one of the most important historical institutions of antiquity, which many compare to the United Nations. The purpose of Amphictyony was to ban hostilities between its members, while its decisions were binding. Sikelianos saw ancient Greek culture and all that Delphi represented as an invaluable storehouse of human values and the ideal platform for international cooperation. Various initiations keep the poet’s dream alive and, who knows, maybe one day his vision will become a reality and Delphi will once again become the Navel of the World.

If you are visiting Greece and you wish to take a trip to Delphi, you can join our guided tour to Delphi from Athens, the focus of which is the values of Delphi and the ‘Delphic Commandments’. You can also have a look at our article about the top things to do in Delphi.

The Most Famous Greek Dances (video)
One Day in Hydra: Best Things to Do (Insider Guide)
Travel to Greece from USA: All the Direct Flights to Start Off 2022
Kallos: The Ancient Greek Ideal for Beauty
Sparta: Things to do and see in the Greek city
A Sightseeing Itinerary for your Holiday to Mykonos
Things to Do in Athens: The ‘must-see’ and the local vibes
Customs in Ancient Greece Associated with September
How Athens got its name: The name-giving myth
Eat Like a Local in Athens: 5 Rules to Follow
The Hills of Athens and the Myths Connected to them
Greek Mythology Monsters: Full list and description
Castles of Peloponnese: Discover Medieval Greece
Greek Mythology Books you need to read (for adults & kids)
Best Places to Eat in Athens - Food Guide (by Locals)
Merry Belly! Authentic Greek Christmas Meal (with recipes)
Hercules: The Life and Labors of the Greek Hero
One day in Athens: How to make the most of it
The Greek Gods: Full List and Background
Athens in October: Reasons to Visit Athens This Month
The Parthenon: 10 Surprising Facts about the Temple
Creating your Dream Vacation with Tailor-made Tours in Greece
Day Trips from Athens - Where the Locals Go
Caryatids: The Daughters of Athens
Monastiraki: Complete Guide and Things to Do
The Buried Rivers of Athens
300: Movie Vs. Reality
Athens Cultural Highlights Off The Beaten Path
Athens City Break For Foodies
6 Greek Myths to Know Before Visiting Athens
10 Landmarks and Monuments You Should Not Miss in Athens
Greece from Home: 10 Ideas for a Virtual Athens Tour
Books on Greek Food and Culture That We Love
The Apple of Discord and the Fairest of Them All
20 Most Famous Greek Mythology Movies
The Panhellenic Games of Ancient Greece
Basic Greek Words to Know Before Traveling to Greece
Interview With a Local: Ancient Greek Rituals and the Alternative Athens
Meet the Olympian Gods
The Great Plague of Athens: Lessons from the Past
Best Walking Tours in Athens, Magical Walking Routes
Private Tours in Athens: The Benefits of Booking in Private
Acropolis Tour: Why a Guided Tour is Necessary
9 Things to Know About Eleusis The European Capital of Culture 2023
Battles of Ancient Greeks That Shaped Western Civilization
The Best Places to Enjoy Vegan Food in Athens
9+1 Unique Things to Do in Athens this Summer for Free
Interview With a Local: Athens Through the Prism of Art
The Role of Greek Mythology in the Creation of Athenian Wonders
Mysteries of Ancient Greece You Didn't Know About
10 Reasons Why You Should Join a Food Tour in Athens
Top 10 Alternative Destinations in Greece
The 10 Best Places to Visit in Greece
10 Sights to Tour in Athens and Bring Greek Mythology to Life
Top 10 Tips to Know Before Traveling to Athens
10 Things to Do in Delphi Home to the Oracle of Apollo
Symposia in Ancient Greece: Reviving the Ancient Custom
30 of the Most Famous Tales from Greek Mythology
Interview with a Local: Greek Neoclassicism and the Unseen Athens
10 Things you didn't Know about Ancient Greeks
48 Hours in Athens: Full Itinerary by Locals - Greek TravelTellers
10+1 Traditional Greek Foods and Drinks to Try when you Visit Greece
10+3 Things to Do in Athens on a Rainy Day
Alternative Things to Do in Athens: Getting Off the Beaten Path in the City of Wonders
Christmas in Athens: Top Things to Do and Know
December in Athens: 4 Reasons why you Should Choose this Month for your Greek Getaway
Interview with a Local: Greek Gastronomy and Athens for Foodies
10+1 Things to Do in Athens to Time Travel to Ancient Greece
How to Travel in Greece Differently: a Guide for Delving Deeper into the Greek Culture