Greek mythology has never ceased to be a source of inspiration to many artists around the world, a fact that underlines its crucial role in the creation of culture. Tales from Greek mythology can be traced in many countries of the West; grand monuments and landmarks around various capitals have been decorated with statues of Olympian gods or scenes from Greek mythology. What we today call mythology, ancient Greeks perceived as their religion, reflecting their beliefs and understanding of the world that surrounded them. The essence of the buildings we admire today in Athens is traced within the hearts of the people that created them. Let’s discover the essence, let’s look behind the obvious.

1. The Parthenon and the Virgin Goddess

For almost 2.500 years, the temple of the Parthenon stands on the Acropolis Hill, dominating over the city of Athens. Few buildings endured more in time than the Parthenon. When UNESCO was founded after World War II, it chose the façade of the Parthenon as its emblem. The architectural complexity and the artistic supremacy of the Parthenon are well known; fully equipped with marble, with curves and slopes to give the illusion of being not a building but a living being instead. And someone can argue that it truly is a ‘living being’ because monuments in ancient Greece aimed to evoke memories. Memories are what defines a human and peoples' culture, thus, the building of the Parthenon is ‘alive’, sustained by the myths, the legends and the memories of the people of Athens. 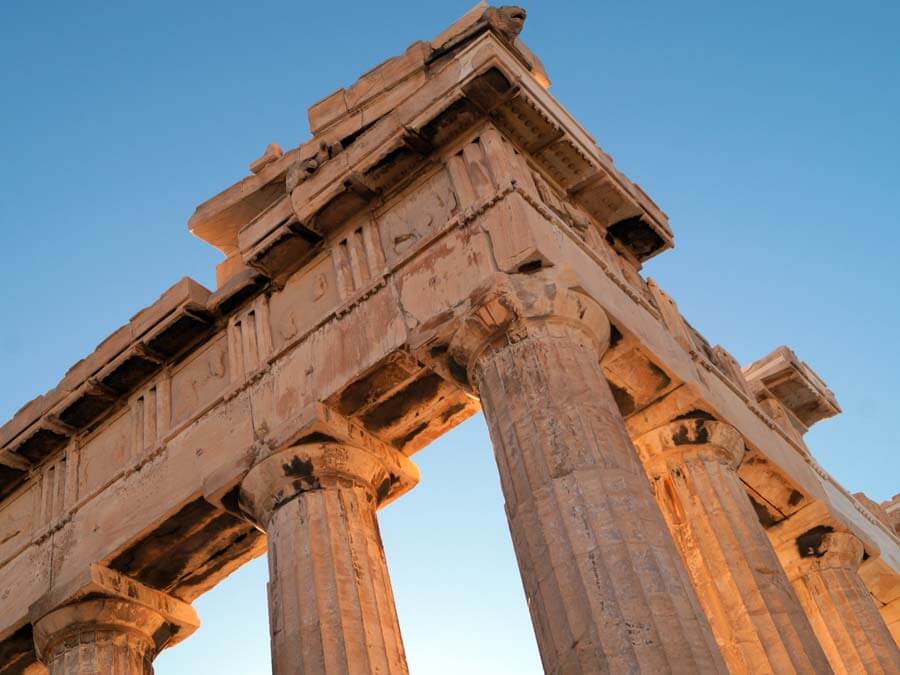 The Parthenon has rich symbolic values for the culture of Greeks. Everything important for the Athenians is depicted in the Temple. Goddess Athena, the Virgin (virgin means ‘parthenos’ in Greek, thus the naming of her Temple), fought against Poseidon for the patronage of the city of wonders. By offering to the people of Athens the olive tree as a gift, she won the vote and gave her name to the city. The ancient Athenians built several temples in honor of their favorite goddess, with the Parthenon being the most majestic! 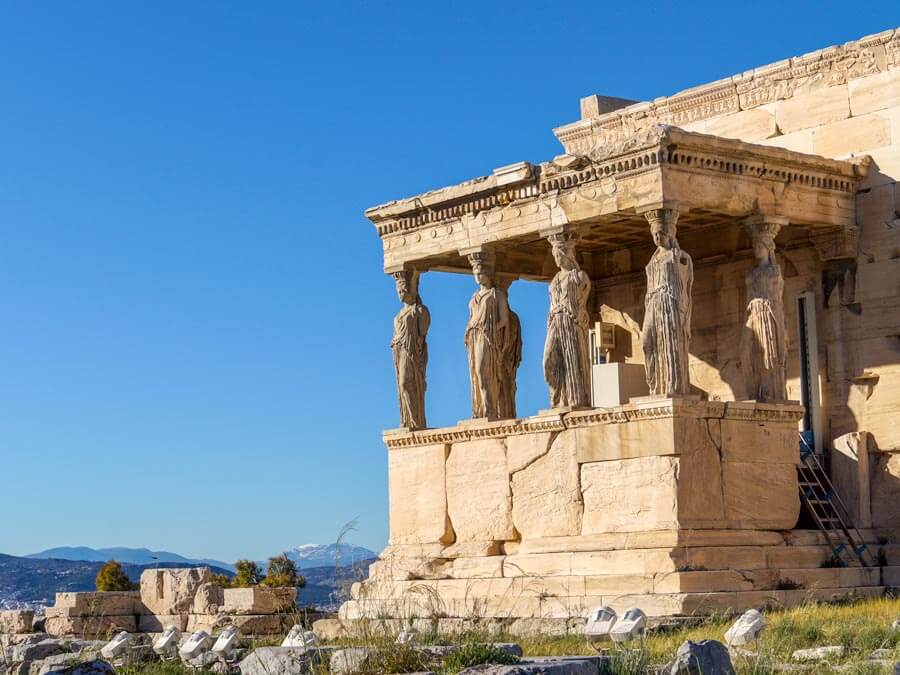 The Great Panathenaea was the most important celebration of Athens in honor of their patron goddess. The whole city was taking part in the procession that would start from Pompeiion in the Ancient Cemetery of Kerameikos and would end on the Rock of Acropolis, carrying Athena’s sacred veil and her wooden statue. This great celebration was captured by Phidias on the frieze of the Parthenon. The depicted procession featured 360 humans and divine figures as well as more than 250 animals, mainly horses. It is the biggest votive relief in history and its two rows, while they look contradictory, miraculously converge at the east side, with the delivery of Athena’s veil. The fact that, for the first time in history, human figures are imprinted on the body of a temple is another reason for the Parthenon’s revolutionary character. Until then, tradition required gods, demigods or legends and heroes to be depicted on sculptural decorations of temples. Consequently, the Parthenon can be thought of as constituting renewal and evolution, something that can be reflected in the time of its creation and the society then. Athens endured immerse disasters during the Persian Wars, with the older Temple of the Parthenon being utterly destroyed. Athens was ready to start again, to begin a new chapter, with Pericles and his propaganda on the wheel. When you look at the Parthenon today, look behind the ruins and the marble; listen to the human stories through the centuries; share the memories of the ancients; they can be found in every corner of this great temple.

Mythology Tour of the Acropolis

2. Temple of Zeus and the Hubris

Τhe Temple of Olympian Zeus is a Wonder with no doubt. The spectator can understand the reason even today, by just standing next to its columns. The construction of the colossal temple began by Peisistratus, a tyrant of Athens, but the works stopped with the abolition of tyranny. The design of the temple predicted 104 colossal columns of Doric order, something much bigger than anything that existed at the time. The Democratic city of Athens thought that the construction of such a huge human project would be seen as hubris by the gods, a disregard of the divinely fixed limits on human action. 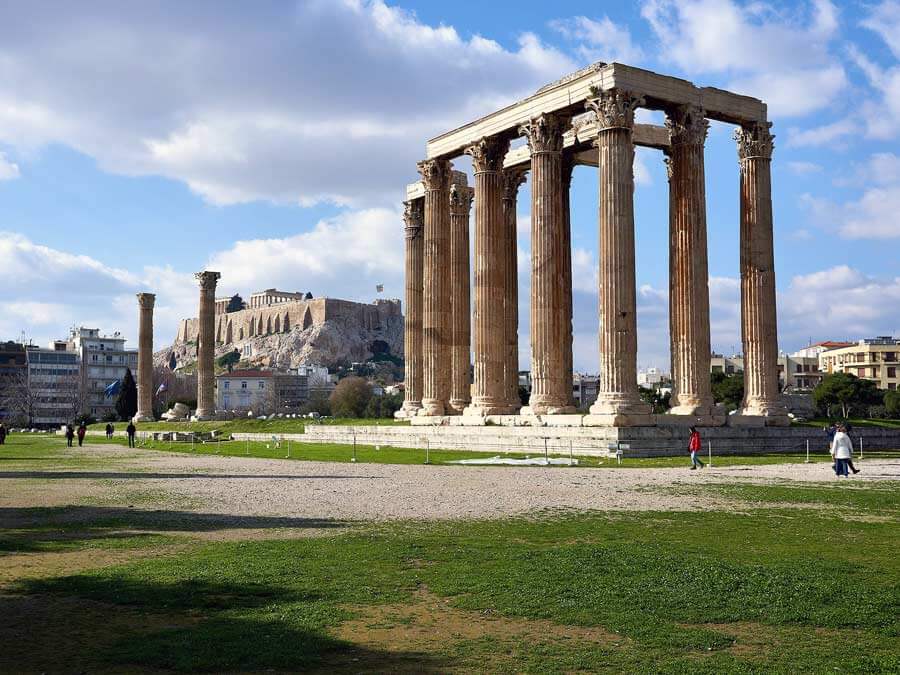 The works continued again much later, by the Roman Emperor Hadrian. The Roman Emperors had no such limitations, often comparing themselves to gods. Emperor Hadrian, who loved Athens and was a great benefactor to the city, finished the temple some 638 years after the project had begun! The temple’s order was changed to Corinthian, the most ornate of the Greek orders. In the interior of the temple, there was the colossal Chryselephantine statue of Zeus and behind the building, there was a colossal statue of Hadrian, built by the people of Athens in honor of the emperor’s generosity, who was also worshipped as a god. Worshiping a mortal man as a god was considered an insult to the gods, great hubris. 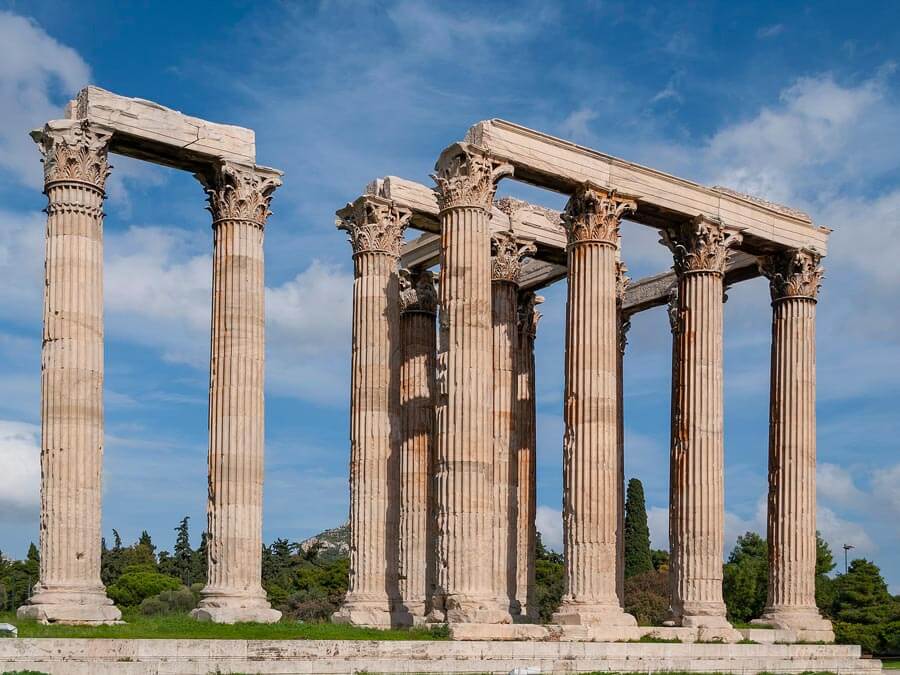 Hubris was the reason, according to the beliefs of ancient Athenians, that led to the destruction of the temple, partly from invasions and partly from nature itself. The great monarch wanted the temple of Zeus to inspire greater awe than the Parthenon did. Hadrian wished to impose the presence of a new Athens, his Athens. In his work Politics, Aristotle uses the temple as an example of how tyrannical regimes compel the population to engage in enormous works, leaving them no time, energy, and means of reaction. Today, only sixteen of the original gigantic columns of the temple survive. The ruins invite you to imagine the thirst for power and the hubris. Stand next to the columns and imagine the struggle of ancient Athenians! 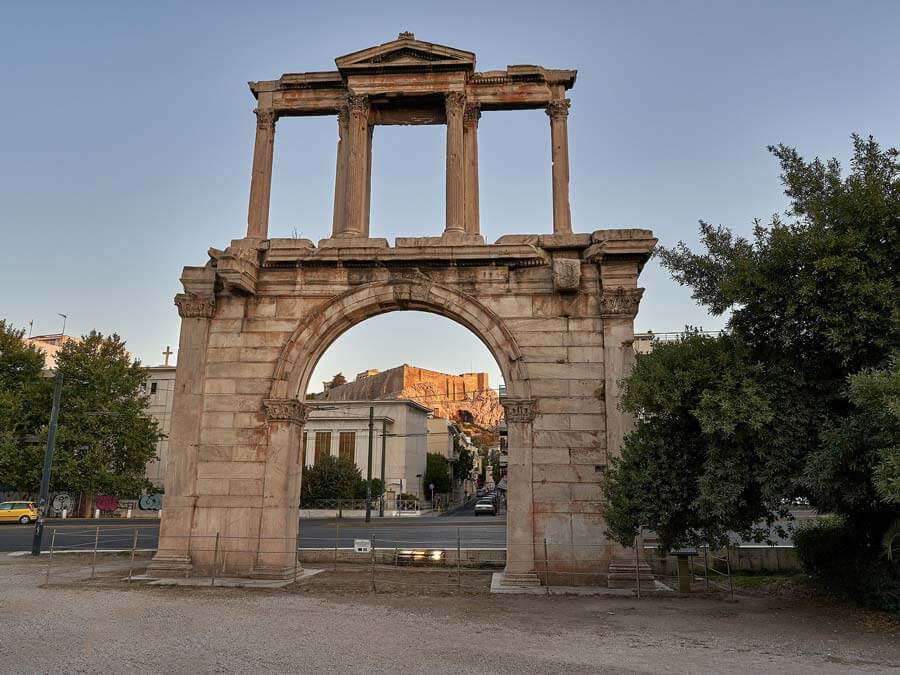 3. Temple of Hephaestus and Athena Ergani

In the ancient market of Athens, one will find the temple of Hephaestus, one of the most beautiful Doric temples of antiquity and best-preserved Greek temples in the world. Constructions began in 449 BC and the temple was dedicated to the Hephaestus, patron god of metallurgy and craftsmanship. 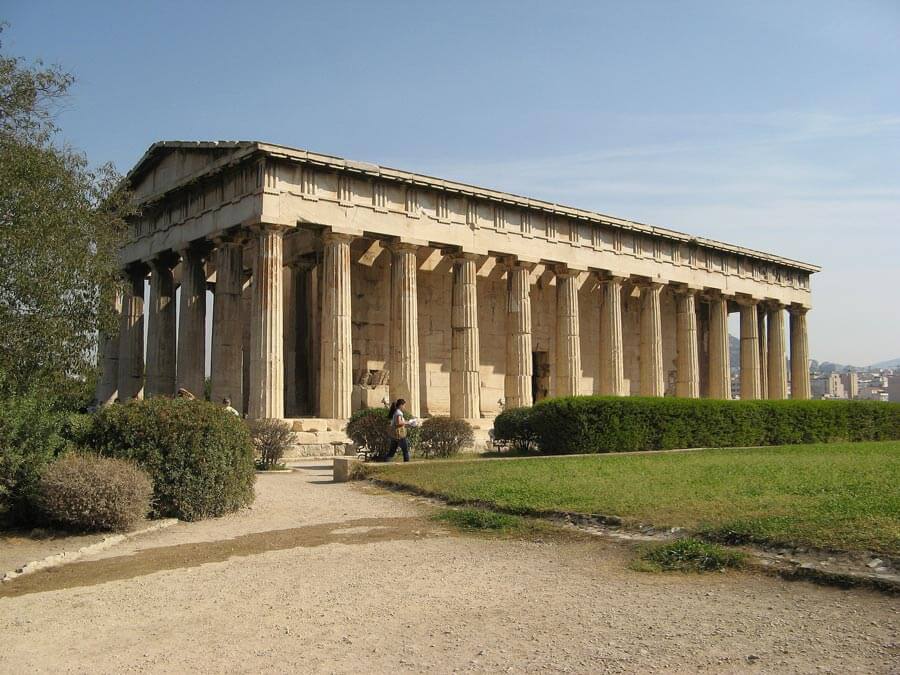 The architect who undertook the construction was greatly influenced by the Parthenon, which was built in the same period. The interesting story is that the archaeologists researching the reliefs of the temple found out that they were depicting the labors of the hero Theseus thus, they believed it was dedicated to the Athenian hero. Due to this belief, the surrounding area of Athens was named ‘Theseio’, after the hero’s name. That was a misconception since ancient Greeks would never dedicate a temple to a mortal, even to one with legendary labors. They soon realized that the temple was dedicated to Hephaestus. According to Pausanias, the temple housed two bronze statues, one of Hephaestus and one of Athena. The statues did not survive but the temple escaped the vandalism and pillage that similar buildings suffered, mainly because it was converted to an orthodox church in the 7th century. 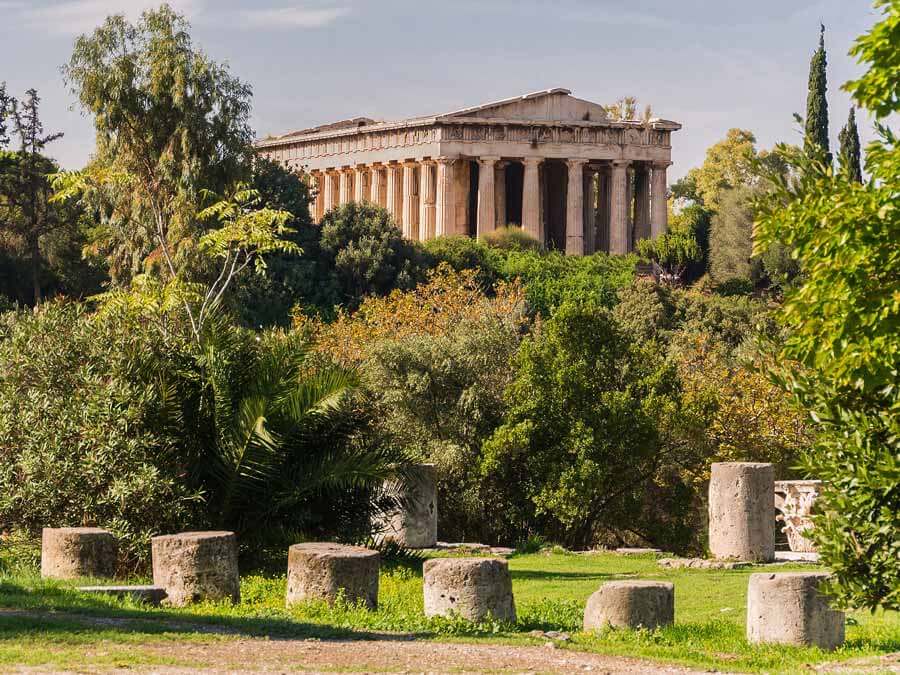 The temple of Hephaestus was built on the hill of Agoraios Kolonos, surrounded by the Ancient Agora, the marketplace of ancient Athens, and the pottery workshops. Positioned on such a unique place, the patron god of craftsmanship could provide inspiration and protection to the craftsmen of the area and their business. Pausanias attributes the presence of the statue of Athena Ergani next to that of Hephaestus’ to the mythological story of Erichthonius, the first king of Athens and son of Hephaestus and Athena, birthed by Gaia, the Earth. However, this may not be the reason, or at least the only reason. Athena had many faces and one of her names was ‘Ergani’. As Ergani, Athena is the inventor of all arts and helped humans to acquire the necessary knowledge for creation. Her presence was essential in all major projects. She could not be absent from the heart of the working life of Athens. 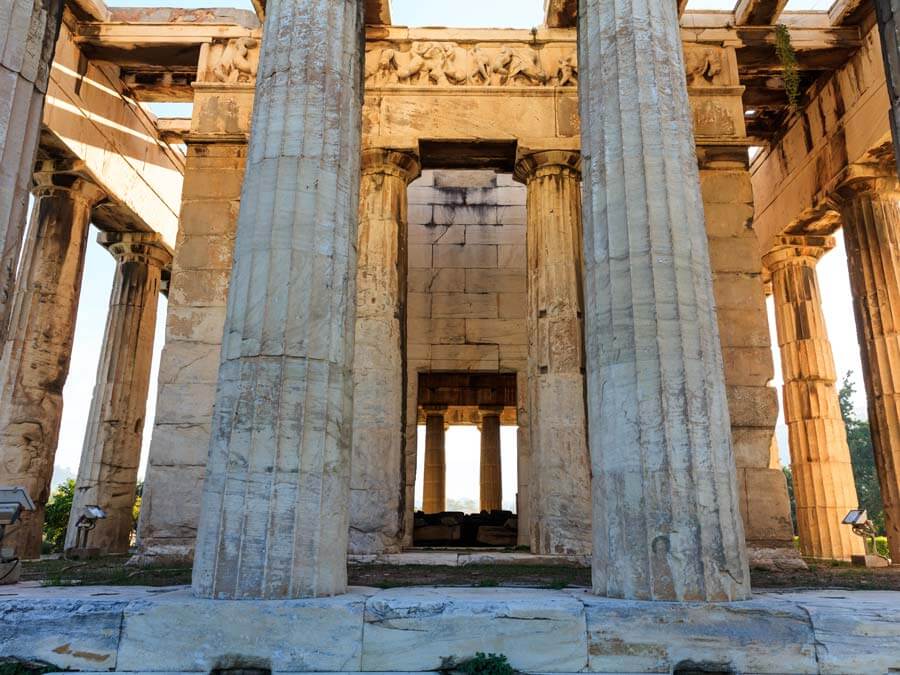 When you visit the Ancient Agora, climb the stairs to the Temple of Hephaestus and marvel at the well-preserved details of the ancient Greek creation. Walk around it and look at the surrounding area and the craftsmen who continue to create their art under the gaze of Hephaestus and Athena Ergani in Thiseio, thousands of years later.

The Ancient Secret of Athens - Inspired by Indiana Jones

Greek mythology consists mainly of epic stories of love and war, of good and evil; timeless values that are part of human life. They mirror the society that created them and prove an excellent source of knowledge for them. You can read the 30 most famous tales from Greek mythology to get inspired or come closer to our past. But besides the vast knowledge we have for the Ancients, there are still great mysteries of Ancient Greece that remain unsolved. If you wish to bring Greek mythology back to life when you visit Athens, here is a list of sights you can tour to do that and mythology tours that you can join.

Greek Mythology Books you need to read (for adults & kids)
Best Places to Eat in Athens - Food Guide (by Locals)
Merry Belly! Authentic Greek Christmas Meal (with recipes)
Hercules: The Life and Labors of the Greek Hero
One day in Athens: How to make the most of it
The Greek Gods: Full List and Background
Athens in October: Reasons to Visit Athens This Month
The Parthenon: 10 Surprising Facts about the Temple
Creating your Dream Vacation with Tailor-made Tours in Greece
Day Trips from Athens - Where the Locals Go
Caryatids: The Daughters of Athens
Monastiraki: Complete Guide and Things to Do
The Buried Rivers of Athens
300: Movie Vs. Reality
Athens Cultural Highlights Off The Beaten Path
Athens City Break For Foodies
6 Greek Myths to Know Before Visiting Athens
10 Landmarks and Monuments You Should Not Miss in Athens
Greece from Home: 10 Ideas for a Virtual Athens Tour
Books on Greek Food and Culture That We Love
The Apple of Discord and the Fairest of Them All
20 Most Famous Greek Mythology Movies
The Panhellenic Games of Ancient Greece
Basic Greek Words to Know Before Traveling to Greece
Interview With a Local: Ancient Greek Rituals and the Alternative Athens
The Delphic Idea
Meet the Olympian Gods
The Great Plague of Athens: Lessons from the Past
Best Walking Tours in Athens, Magical Walking Routes
Private Tours in Athens: The Benefits of Booking in Private
Acropolis Tour: Why a Guided Tour is Necessary
9 Things to Know About Eleusis The European Capital of Culture 2021
Battles of Ancient Greeks That Shaped Western Civilization
The Best Places to Enjoy Vegan Food in Athens
9+1 Unique Things to Do in Athens this Summer for Free
Interview With a Local: Athens Through the Prism of Art
Mysteries of Ancient Greece You Didn't Know About
10 Reasons Why You Should Join a Food Tour in Athens
Top 10 Alternative Destinations in Greece
The 10 Best Places to Visit in Greece
10 Sights to Tour in Athens and Bring Greek Mythology to Life
Top 10 Tips to Know Before Traveling to Athens
10 Things to Do in Delphi Home to the Oracle of Apollo
Symposia in Ancient Greece: Reviving the Ancient Custom
30 of the Most Famous Tales from Greek Mythology
Interview with a Local: Greek Neoclassicism and the Unseen Athens
10 Things you didn't Know about Ancient Greeks
48 Hours in Athens: Full Itinerary by Locals - Greek TravelTellers
10+1 Traditional Greek Foods and Drinks to Try when you Visit Greece
10+1 Things to Do in Athens on a Rainy Day
Alternative Things to Do in Athens: Getting Off the Beaten Path in the City of Wonders
Christmas in Athens: Top Things to Do and Know
December in Athens: 4 Reasons why you Should Choose this Month for your Greek Getaway
Interview with a Local: Greek Gastronomy and Athens for Foodies
10+1 Things to Do in Athens to Time Travel to Ancient Greece
How to Travel in Greece Differently: a Guide for Delving Deeper into the Greek Culture