Type to Search
The Buried Rivers of Athens

The Buried Rivers of Athens

A constant flow of fresh water was always considered one of the priority criteria when looking for a new settlement or building a town. The water is a symbol of life and a key ingredient of life itself. Modern Athens is the only European capital that has no river flowing through it! You may be surprised, however, that this has not always been the case. Athens had not one or two, but three rivers in the past! So what happened to them?

From the Archaic period to the Golden Age of Pericles and later on to the Roman period and even the Ottoman Rule, Athens had a constant source of fresh water from three different rivers. Two of those rivers stretched beyond the city limits.

The western and greater part of the plain of Attica was crossed by Kifissos river, which had its springs at the foothills of Parnitha mountain to the north and continued its course for 27 km until it poured into the Falirikos Bay.

The eastern part was crossed by Ilissos river, heading westward from the foothills of Hymettus mountain, passing through the valley formed between Philopappos Hill and Sikelias Hill (between modern Kallithea and Neos Kosmos neighborhoods).

The smaller of the three was Eridanos river, streaming from the southern slopes of Lycabettus hill where the Panopos fountain was located; flowing north of the Acropolis, it passed through the Ancient Agora and continued northward until it reached the Sacred Gate in Kerameikos. There, it continued to flow underground for several hundred meters, it turned south and exited into Ilissos river. 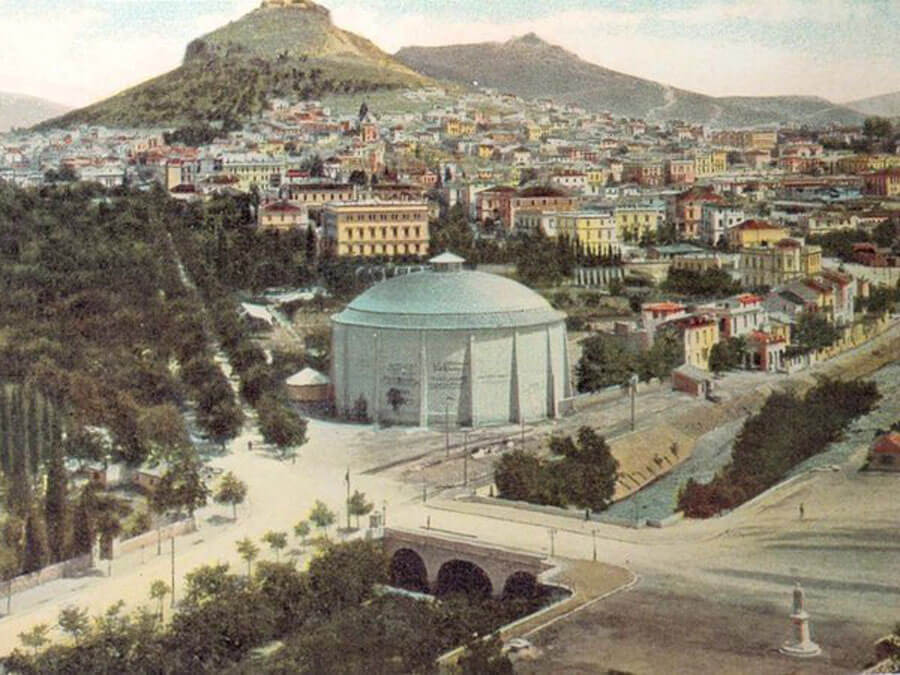 Any visitor to Athens today will realize that there is no source of water left in the city. The rivers are no longer visible and one needs to look underground to see traces of their flow. The rivers were buried under concrete during the city’s postwar car-centered development, with many of its citizens characterizing it “a crime against the city”. The historic rivers of Athens, flowing for thousands of years and providing fresh water to its people were sacrificed on the altar of evolution. Today they are all buried under concrete.

Let’s get to know these historic rivers that once brought life to the city of Athens! 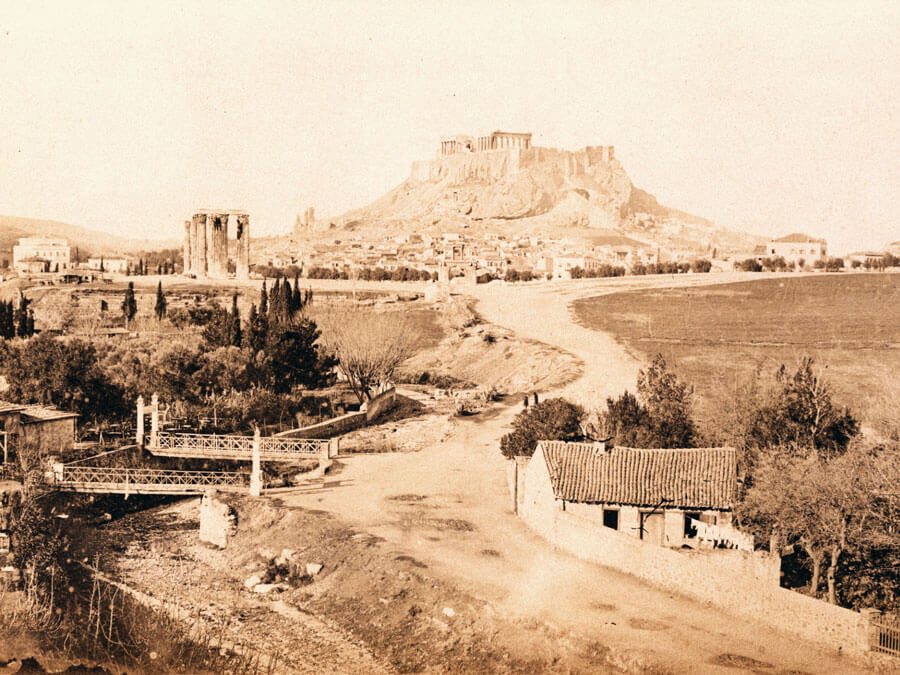 Its riverbed covers an area of 12,000 acres, streaming from Parnitha mountain and passing through at least ten Attica areas. The first references to Kifissos were made by ancient Greek writers more than 2000 years ago. For the ancients, the river Kifissos was a sanctuary, a source of life for the great, fertile plain. The river was first exploited in the Hadrian era, when the first aqueduct, a water supply system, was built along the Roman side. Kifissos gave his name to an area near its eastern sources, the Kifisia neighborhood of Athens.

In Greek mythology, rivers were considered gods. Kifissos was a son of the Titans Ocean and Tethys. Plato's Academy in the valley of Kifissos was transformed by Kimon into a tree-lined garden with well-kept trees and shady promenades. This landscape created the conditions for the spiritual meditation needed by those attending schools at that time.

After the great flood of 1961, the river was covered with concrete because it was often overflooded. The volume of cement is so much that the microclimate of the area has changed. The breeze of the sea no longer passes and in summer the temperature is much higher. 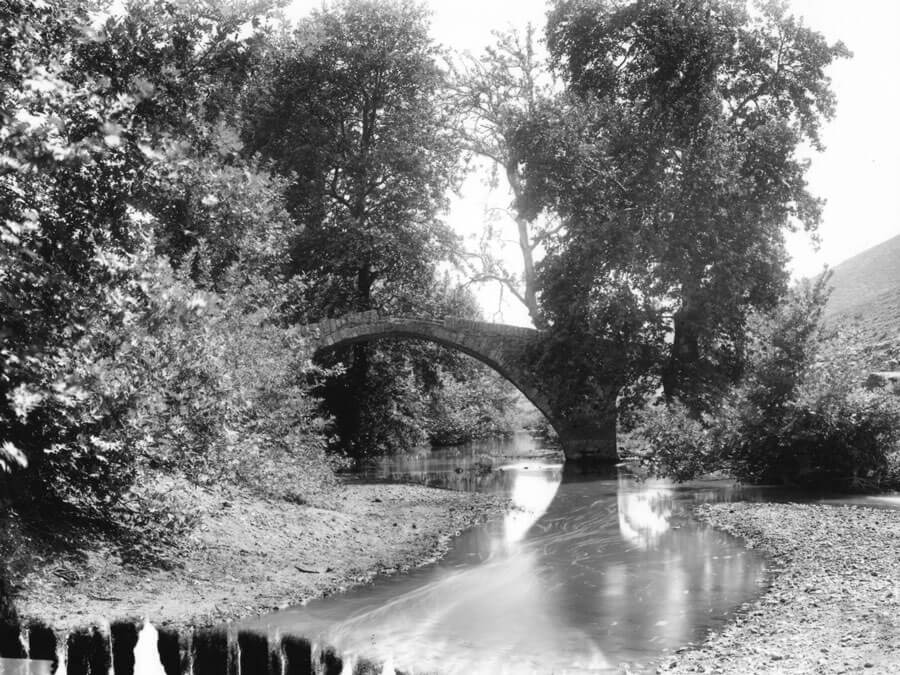 According to Greek mythology, on the banks of Ilissos river lived the Muses. Vorreas, the Wind God, came to this river to rest when he saw the beautiful daughter of Erechtheia of Oreithia. He fell in love with her and abducted her by grabbing her with his large wings. Legend also has it that near this river is the place where the semi-mythical king of Athens, Codrus, sacrificed himself in what was an ancient exemplar of patriotism.

During antiquity, Ilissos offered a beautiful route and Socrates once taught on its banks. The river streamed from the northwestern slopes of Hymettus mountain and flowed along and outside the walls of Athens. In order to access the Panathenaic Stadium from the city, you had to cross the river through a stone bridge with two arches, which was destroyed in the late 18th century. 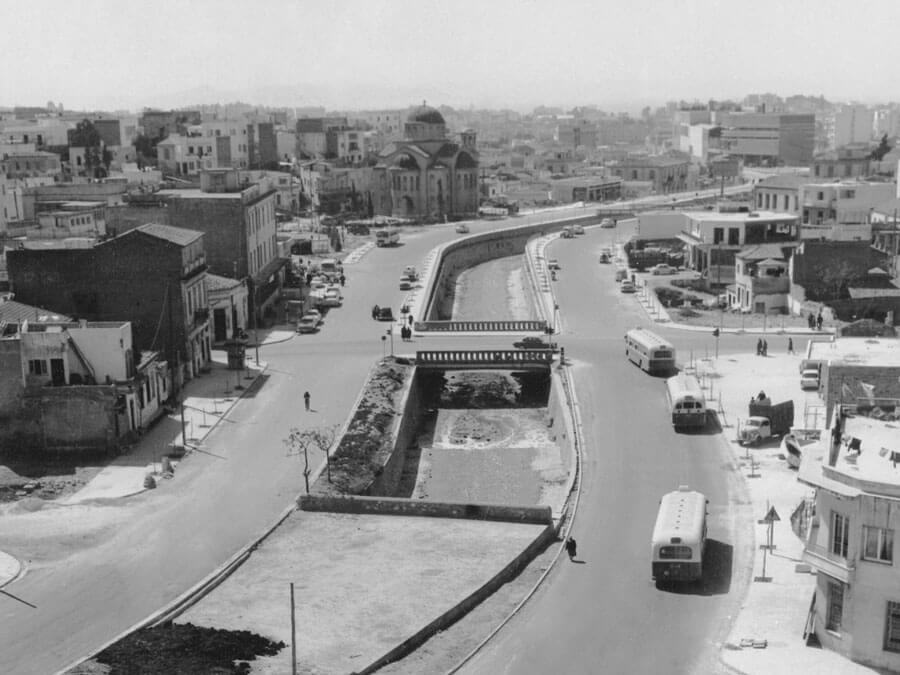 On the banks and along the river there were many sacred and public buildings, including the Temple of Olympian Zeus, the Heraklion (Cynosarges) and others. Opposite the present church of Agia Fotini, there was the Kalliroi fountain. Everything changed in the 1930s when the city's rapid growth began. The river was then covered for fear of an epidemic danger and the tram line was later built on top of it, completely erasing it from the everyday life of the Athenians, until today. The river continued its flow all these years underground. The Municipality of Athens has recently tried to expand the works of the tram line and it was found that there was a risk of the ground being receded because of the water underneath. Constructions have since stopped and the tram line was cut between Syntagma and Syngrou Fix stations. There is a new proposal submitted by a company according to which the riverbed of Ilissos will be revealed once again in Kallirois street, with the creation of a 1.2 km long park. If this is realized it will surely provide fresh air in the concrete jungle. 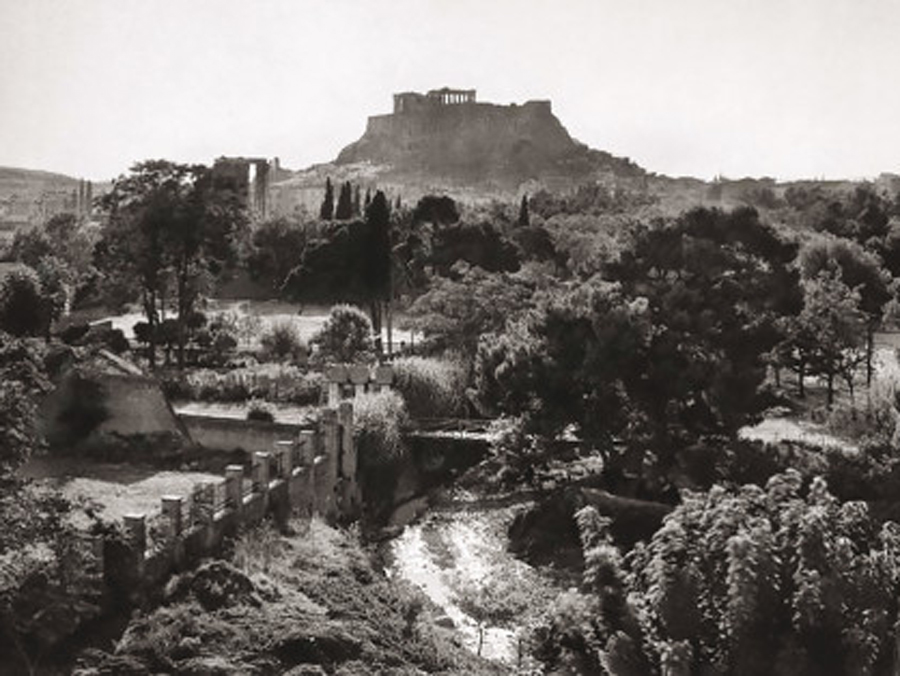 The first mention of the river is traced in one of Plato’s late dialogues, ‘Critias’, where the famous myth of the lost kingdom of Atlantis originated. It takes us back to the ancient times when the Acropolis was so large that it reached as far as Eridanos and Ilissos, and included Pnyx within.

Eridanos, with its riverbed, is in fact the collector of the water streaming from the hills of the center, Lycabettus hill, the Acropolis hill, the Areopagus hill and the hill of the Nymphs. Eridanos River was the first Athenian river to be buried, already from the classical times. Two millennia later, however, it still flows in the center of Athens, under the concrete and our feet. 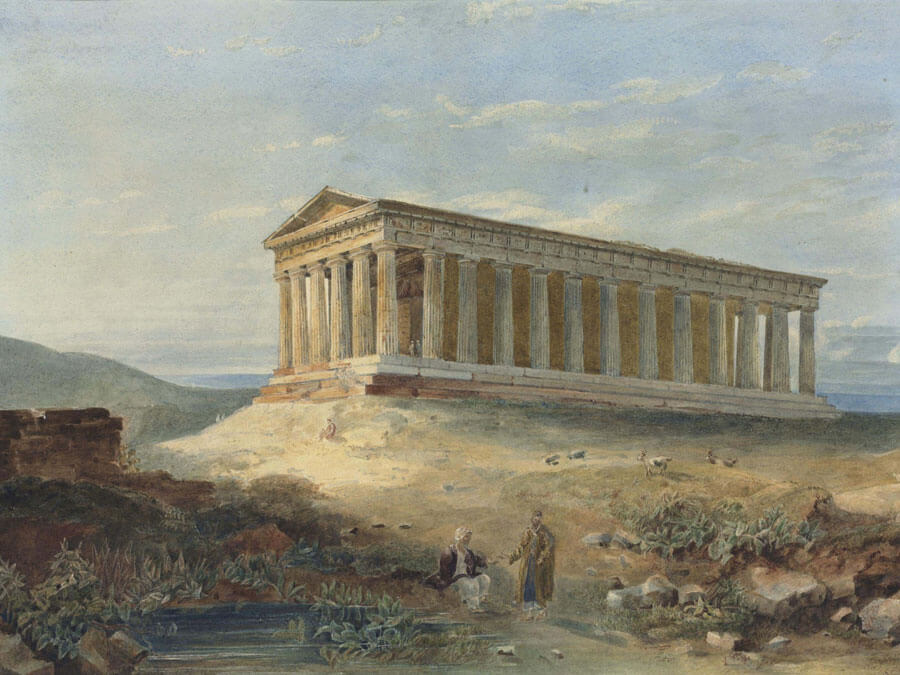 Back in 478 BC, with the contraction of the Themistoclean Wall, the riverbed is built, arranged and enclosed within the walls. Until then, Eridanos was flowing freely in the Athenian landscape, sometimes changing course, swamping the ancient cemetery of Athens and forcing the change of the burial position each time.

A portion of its bed along the Sacred Road was aligned and the bed was enclosed with stone walls on either side. An indication of human intervention in the river is the discovery of more than 7,000 ‘ostraka, small pieces of pottery that have writing scratched into them, which were used to fill artificial parts of the riverbed.

The installation of the electric railroad at the end of the 19th century, which cut the Ancient Agora in two, is the second major project that has dramatically altered the landscape. Today, only a small part of its riverbed is visible in the archaeological site of Kerameikos (next to the Sacred Gate), which crosses the excavation site from the east to the west for about 200 meters. 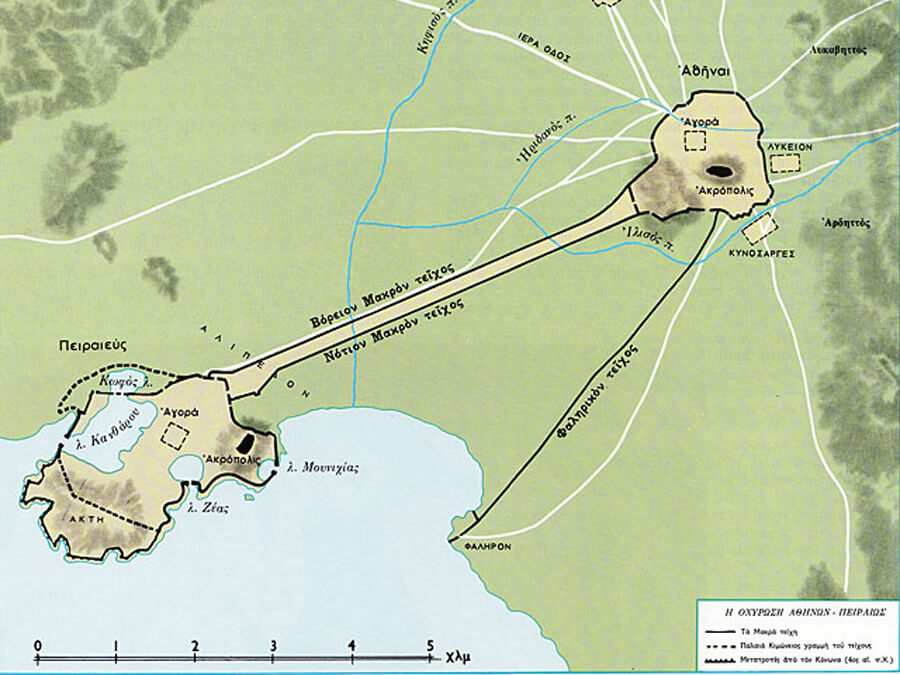 The thriving of a city and a community, in general, has always been linked to its rivers. People throughout the years have found different ways of exploiting river water. In Greece in particular, rivers are not navigable as most descend from mountains forming gorges. If a river’s flow is rapid, it can even be used to generate electricity as hydroelectric plants are built next to it. This mode of production produces no pollutants and the only negative is the construction of a dam that interrupts communication between the two parts of the river. Significant wetlands are formed around the rivers. Rivers besides being a source of life also cause many problems when they flood and this is the main reason that the rivers of Athens have been covered. The overflow caused by bad weather and poor construction of dams or floodplains had devastating consequences for the fields and residential areas adjacent to them, plus the danger of an epidemic caused fear and there are numerous times in the past that many people lost their lives from such a disease. Now, better equipped and with vast knowledge on the subject, we await impatiently and with most excitement the revelation of one of our three rivers, Ilissos, and the change that will bring into our city’s life. 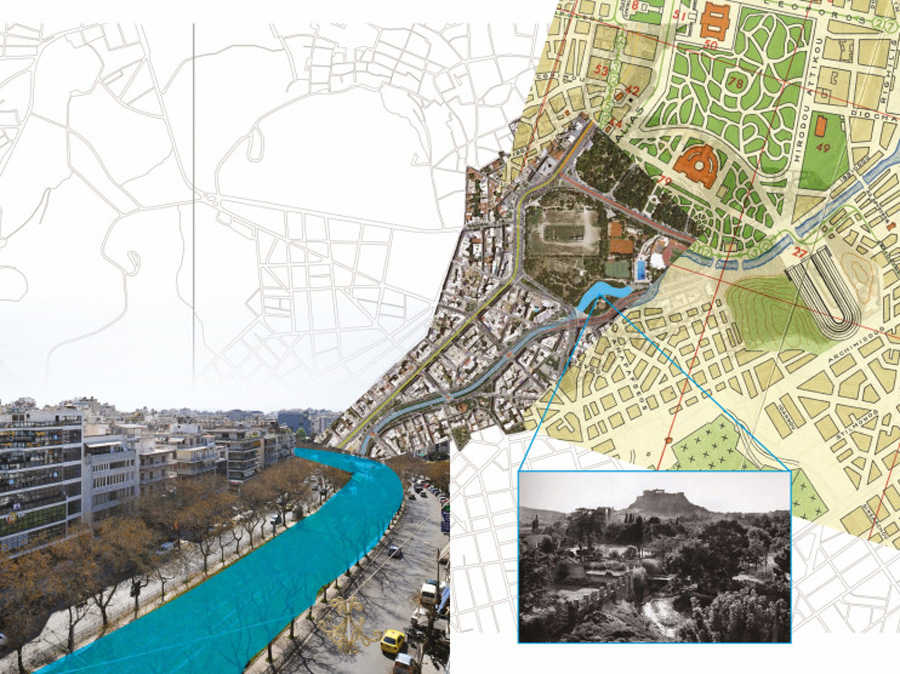 If you wish to read more interesting facts about Athens and Greece in general, have a look at our Blog. You can also subscribe to our newsletter and receive news of new articles once a month.

Women in ancient Greece: The role of women in the Classical Period
Best Time to Visit the Acropolis and Why
The Most Famous Greek Dances (video)
One Day in Hydra: Best Things to Do (Insider Guide)
Kallos: The Ancient Greek Ideal for Beauty
Sparta: Things to do and see in the Greek city
A Sightseeing Itinerary for your Holiday to Mykonos
Things to Do in Athens: The ‘must-see’ and the local vibes
Customs in Ancient Greece Associated with September
How Athens got its name: The name-giving myth
The Hills of Athens and the Myths Connected to them
Greek Mythology Monsters: Full list and description
Castles of Peloponnese: Discover Medieval Greece
Greek Mythology Books you need to read (for adults & kids)
Hercules: The Life and Labors of the Greek Hero
The Greek Gods: Full List and Background
Athens in October: Reasons to Visit Athens This Month
The Parthenon: 10 Surprising Facts about the Temple
Creating your Dream Vacation with Tailor-made Tours in Greece
Day Trips from Athens - Where the Locals Go
Caryatids: The Daughters of Athens
300: Movie Vs. Reality
6 Greek Myths to Know Before Visiting Athens
10 Landmarks and Monuments You Should Not Miss in Athens
Greece from Home: 10 Ideas for a Virtual Athens Tour
The Apple of Discord and the Fairest of Them All
20 Most Famous Greek Mythology Movies
The Panhellenic Games of Ancient Greece
The Delphic Idea
Meet the Olympian Gods
The Great Plague of Athens: Lessons from the Past
Best Walking Tours in Athens, Magical Walking Routes
Private Tours in Athens: The Benefits of Booking in Private
Acropolis Tour: Why a Guided Tour is Necessary
9 Things to Know About Eleusis The European Capital of Culture 2023
Battles of Ancient Greeks That Shaped Western Civilization
The Role of Greek Mythology in the Creation of Athenian Wonders
Mysteries of Ancient Greece You Didn't Know About
Top 10 Alternative Destinations in Greece
The 10 Best Places to Visit in Greece
10 Sights to Tour in Athens and Bring Greek Mythology to Life
Top 10 Tips to Know Before Traveling to Athens
10 Things to Do in Delphi Home to the Oracle of Apollo
Symposia in Ancient Greece: Reviving the Ancient Custom
30 of the Most Famous Tales from Greek Mythology
Interview with a Local: Greek Neoclassicism and the Unseen Athens
10 Things you didn't Know about Ancient Greeks
10+3 Things to Do in Athens on a Rainy Day
10+1 Things to Do in Athens to Time Travel to Ancient Greece
How to Travel in Greece Differently: a Guide for Delving Deeper into the Greek Culture