Things to know about the Ancient Greek Symposium

You have watched it in the movies, you have seen it in paintings and frescoes, you have heard about it, but what exactly is an ‘Ancient Greek Symposium’? The gathering, the ritual, the wine, the music… below we present to you the most important information in order to become an “insider” into one of the most established and intriguing customs of antiquity. 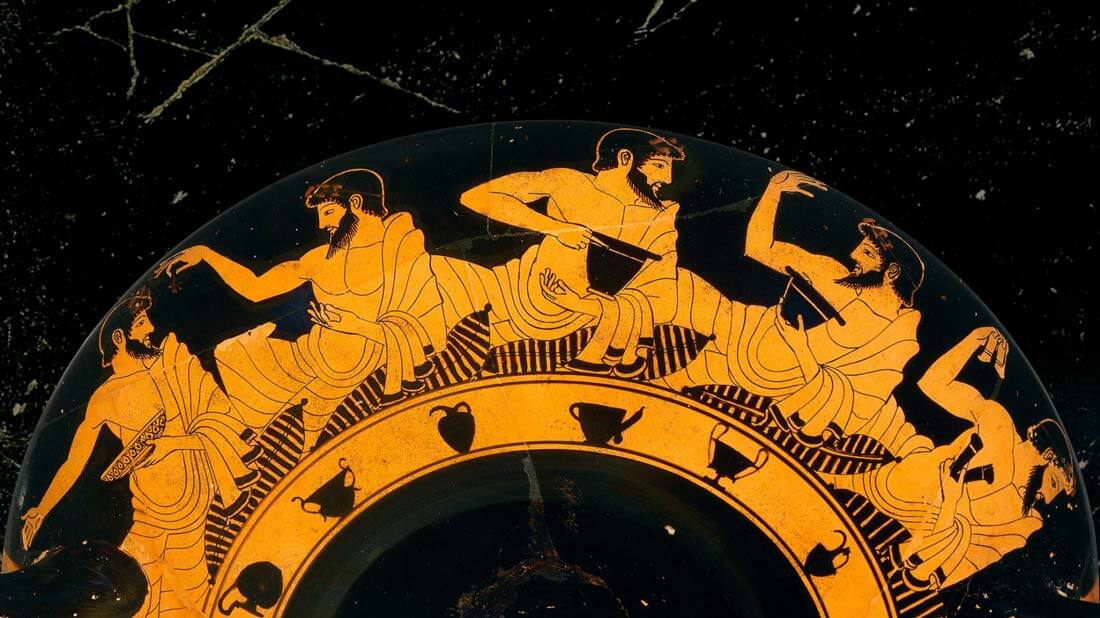 Ancient Greeks did not have the plethora of options we have today for entertainment in the evenings. Restaurants, bars, cinemas, bowling, escape rooms… all of those were concepts unknown to them. They had theater of course. And they loved it! But, there are only so many plays you can see. How did they spend the rest of their evenings? And to be precise, what did the men do? Because women back then, especially in Athens, were confined in their house. Men were gathering in friends’ houses to attend Symposia. Someone would invite his friends to his house, in a special room called andronas (meaning “men’s room” in Greek). Women were not allowed in that room. Men would dine, drink, socialize, talk, philosophize, recite poems (Homer was a famous choice of course), laugh and enjoy themselves! The only women allowed in the Symposia were the hetaerai, well-educated prostitutes that would entertain the men with music, singing and sex. The 5th century B.C. was the peak for the institution of Symposia and the hosts would pay a lot of money to have the best cooks for their guests to be satisfied! 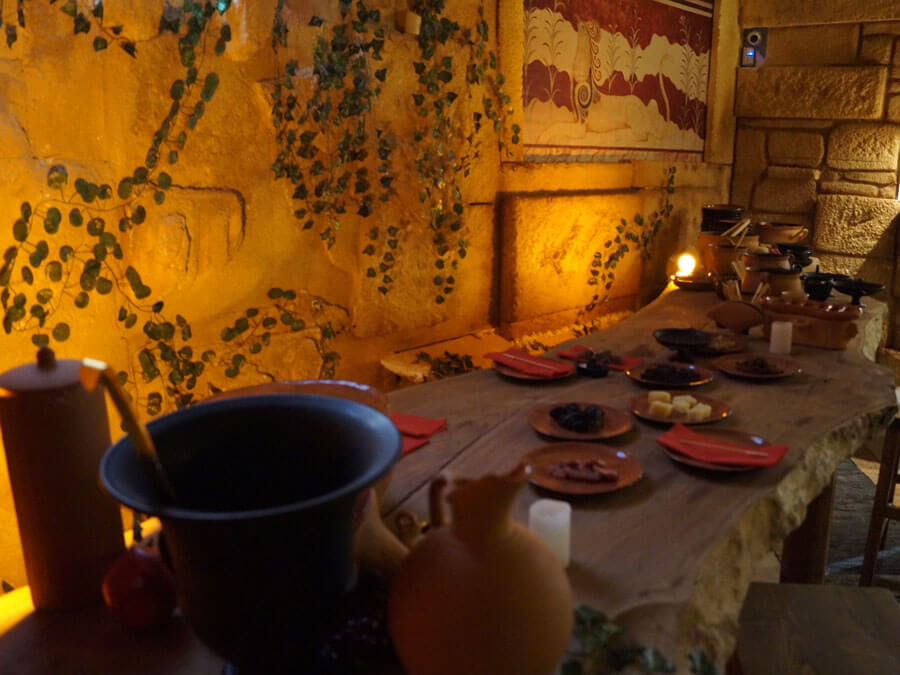 The Symposia had a ritual, a series of actions performed according to a prescribed order, that needed to be followed by the guests. At first, the servants would undertake the task of “makeover” of the guests. They would bring water to wash their hands, clean them and place ivy wreaths on their heads. Then, an offering would follow to Dionysus, the god of wine, pleasure and festivity in Greek Mythology. The servants would then lead the guests to anaklintra (a type of bed), which they would share with two or three other guests. They had low tables next to them for the food. The host would read the grammatidion, that is, the ancient Greek menu! They used the bread for spoons and knives for meat. After the dining was over, they would start drinking wine. The kylix, their wine-drinking cup, could be easily placed on their shoulders, helping the drinking process to be more relaxing.

Symposia were so in vogue that even the great philosopher Plato - who was attending symposia himself of course - used them as a setting for one of his philosophical texts! Plato’s “Symposium” is touching mostly the meaning of love. The setting is a Symposium room in a house of Ancient Athens, where the poet Agathonas has invited some fine men to entertain. The guests decided to spend the night dialectically discussing about Eros. Thus, each guest takes the floor and expresses their views on the matter. Plato, using the words of his character Aristophanes, cites one of the most beautiful creations of ancient literature about love! Using a myth, he explains the meaning of true love in the world and the reason we spend our lives looking for it.

The Symposium was the place to philosophize and cite poetry. The purpose of the venue was not just to dine and drink. Upon entering the room, you would find the anaklintra, in a Π shape, and everyone was resting while eating, drinking, and talking. And the more you drink, the more you talk! Gossips were, of course, one of the first things to touch upon. Men would also cite poems or request their favorite one again and again, like playing your favorite song in the repeat. During this whole time, the men of Athens would come closer, get to know each other well, share opinions about life, politics, laws, philosophy and create bonds that would last outside that room as well. It is not an exaggeration to suggest that, in a way, the shared experiences during the Symposium would impact their everyday routine and shape a fertile ground for the democratic ideas and practices to grow! 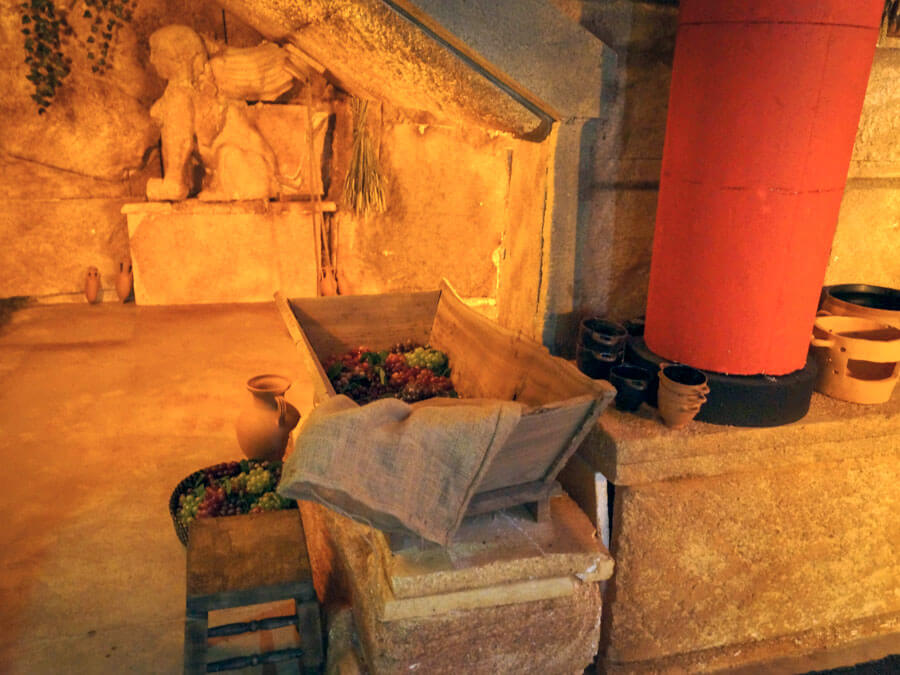 Music played an important role in the Athenian life and entertainment. For the philosopher Pythagoras and his School, music was, above all, a mathematical science, the image of heavenly harmony! So, they always had young men and women (the hetaerai) in the Symposium room who played music - usually the flute. But they also played games - well, games that didn’t require them to get up from their anaklintra! Kottavos was the most popular one; as they were lying on their bed, they would try to throw their wine from their kylix inside a ceramic bowl which had a ball in it, in order to slowly fill the bowl and get the ball fall from it. The one who made that happen would be crowned Symposium King for the next gathering! 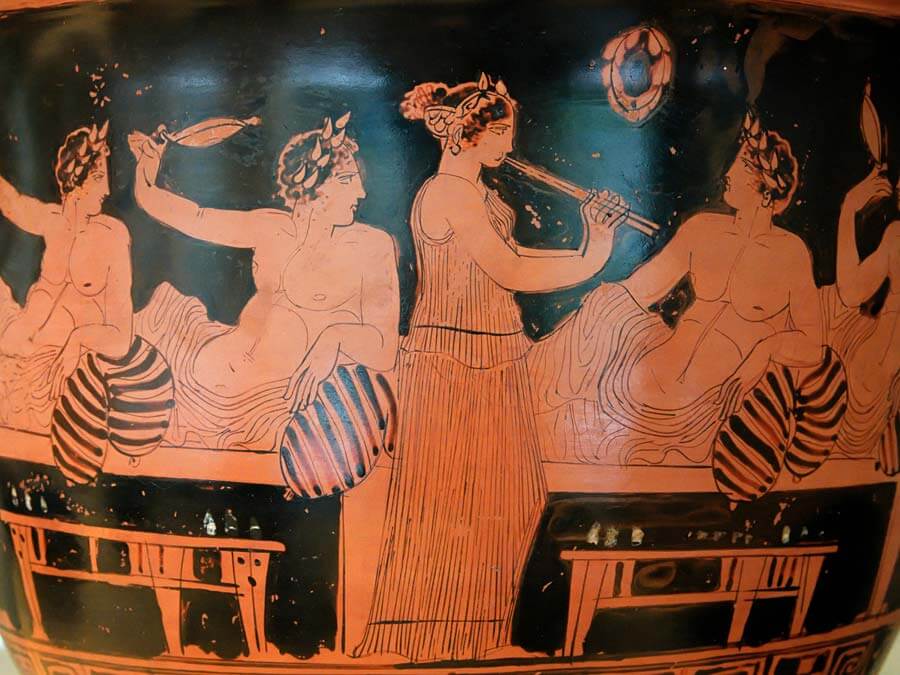 Wine, Women, and the Mischievous Men

The passage from dinner to the main event (drinking) was accompanied by an offer and a poem in the form of ode. The now clean tables were restored with nuts, fruits, sweets and savory pies, cheese, pastries, etc., to accompany the hours of wine drinking, philosophizing and having fun. The wine flowed abundantly but was always watered by the Symposium King, who was chosen by chance or for being the previous winner of the kottavos game. Ancient Greeks believed that getting drunk is a habit of barbarians and only god Dionysus could drink pure wine without getting drunk. Thus, they used to water their wine, with the water usually being twice as much as the wine. They did enjoy themselves though and they lived by and toasted to: "Ζήσειας, χαίρε, χαίρε και πίε" (“Live, enjoy, enjoy and drink”)! The hetaerai (the well-educated prostitutes attending their needs and curiosity) would play music for them, dance and entertain them in every way possible. Although the watered wine cannot get you drunk as easily, the euphoria created in the Symposia would many times lead to sexual feasts and orgies. 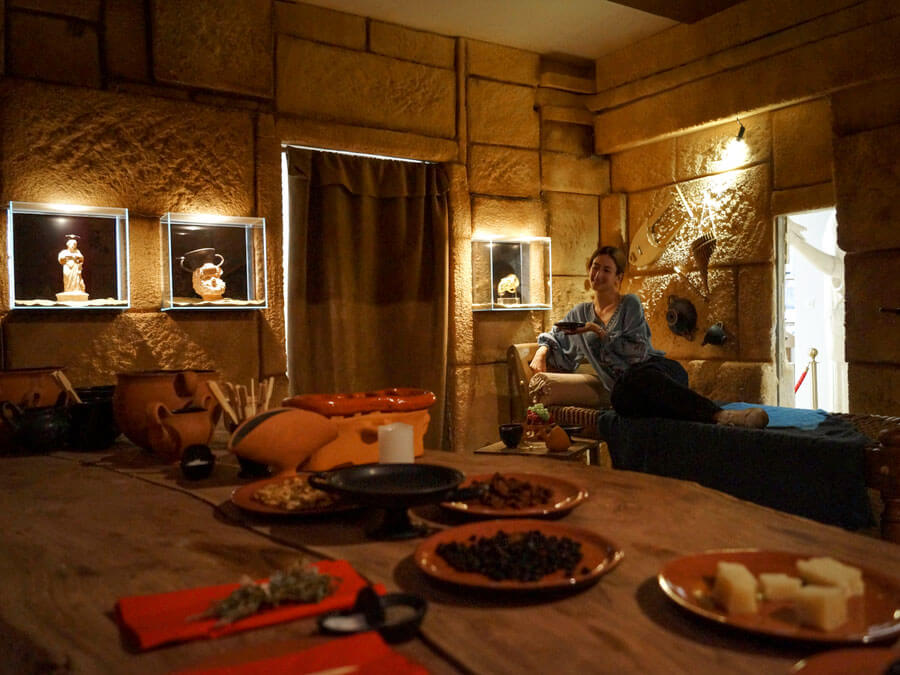 At the heart of it, a Symposium was about men having fun while eating and drinking. However, apart from the fun part, the Symposium's institution, with its ritual and content, in addition to its social significance, played a very important role in the educational, cultural and political life of Ancient Greeks. The term "Symposium" came to stay and it is used today for scientific meetings, where expert speakers present opinions on a particular topic and engage in dialogues, highlighting the timelessness and continuity of the ancient culture for more than 2500 years! If you wish to revive the experience of an Ancient Greek Symposium, drinking wine prepared with the ancient vinification technique, eating snacks from ancient Crete, listening to flute and philosophizing, you can join a private tour in Athens. For more ways and ideas on how to time-travel to Ancient Greece and experience Greek culture, read our article for things to do in Athens. If you wish to learn more interesting facts about Ancient Greeks and their everyday life, read here.

Athens Street Art Guide and Which Neighborhoods to Visit
Women in ancient Greece: The role of women in the Classical Period
Best Time to Visit the Acropolis and Why
The Most Famous Greek Dances (video)
One Day in Hydra: Best Things to Do (Insider Guide)
Travel to Greece from USA: All the Direct Flights to Start Off 2022
Kallos: The Ancient Greek Ideal for Beauty
Sparta: Things to do and see in the Greek city
A Sightseeing Itinerary for your Holiday to Mykonos
Things to Do in Athens: The ‘must-see’ and the local vibes
Customs in Ancient Greece Associated with September
How Athens got its name: The name-giving myth
Eat Like a Local in Athens: 5 Rules to Follow
The Hills of Athens and the Myths Connected to them
Greek Mythology Monsters: Full list and description
Castles of Peloponnese: Discover Medieval Greece
Greek Mythology Books you need to read (for adults & kids)
Best Places to Eat in Athens - Food Guide (by Locals)
Merry Belly! Authentic Greek Christmas Meal (with recipes)
Hercules: The Life and Labors of the Greek Hero
One day in Athens: How to make the most of it
The Greek Gods: Full List and Background
Athens in October: Reasons to Visit Athens This Month
The Parthenon: 10 Surprising Facts about the Temple
Creating your Dream Vacation with Tailor-made Tours in Greece
Day Trips from Athens - Where the Locals Go
Caryatids: The Daughters of Athens
Monastiraki: Complete Guide and Things to Do
The Buried Rivers of Athens
300: Movie Vs. Reality
Athens Cultural Highlights Off The Beaten Path
Athens City Break For Foodies
6 Greek Myths to Know Before Visiting Athens
10 Landmarks and Monuments You Should Not Miss in Athens
Greece from Home: 10 Ideas for a Virtual Athens Tour
Books on Greek Food and Culture That We Love
The Apple of Discord and the Fairest of Them All
20 Most Famous Greek Mythology Movies
The Panhellenic Games of Ancient Greece
Basic Greek Words to Know Before Traveling to Greece
Interview With a Local: Ancient Greek Rituals and the Alternative Athens
The Delphic Idea
Meet the Olympian Gods
The Great Plague of Athens: Lessons from the Past
Best Walking Tours in Athens, Magical Walking Routes
Private Tours in Athens: The Benefits of Booking in Private
Acropolis Tour: Why a Guided Tour is Necessary
9 Things to Know About Eleusis The European Capital of Culture 2023
Battles of Ancient Greeks That Shaped Western Civilization
The Best Places to Enjoy Vegan Food in Athens
9+1 Unique Things to Do in Athens this Summer for Free
Interview With a Local: Athens Through the Prism of Art
The Role of Greek Mythology in the Creation of Athenian Wonders
Mysteries of Ancient Greece You Didn't Know About
10 Reasons Why You Should Join a Food Tour in Athens
Top 10 Alternative Destinations in Greece
The 10 Best Places to Visit in Greece
10 Sights to Tour in Athens and Bring Greek Mythology to Life
Top 10 Tips to Know Before Traveling to Athens
10 Things to Do in Delphi Home to the Oracle of Apollo
30 of the Most Famous Tales from Greek Mythology
Interview with a Local: Greek Neoclassicism and the Unseen Athens
10 Things you didn't Know about Ancient Greeks
48 Hours in Athens: Full Itinerary by Locals - Greek TravelTellers
10+1 Traditional Greek Foods and Drinks to Try when you Visit Greece
10+3 Things to Do in Athens on a Rainy Day
Alternative Things to Do in Athens: Getting Off the Beaten Path in the City of Wonders
Christmas in Athens: Top Things to Do and Know
December in Athens: 4 Reasons why you Should Choose this Month for your Greek Getaway
Interview with a Local: Greek Gastronomy and Athens for Foodies
10+1 Things to Do in Athens to Time Travel to Ancient Greece
How to Travel in Greece Differently: a Guide for Delving Deeper into the Greek Culture