The Hills of Athens and the Myths Connected to them

Athens is built around and between many hills. Each hill offers a unique characteristic to the geography of the Greek capital. Since those hills served as a focal point for the lives of the people, especially in regards to offering protection, many myths and legends were created about them and many important events took place on top of them. Here are the hills of Athens and their mythological stories connected to them:

According to Greek mythology, Lycabettus Hill was shaped from a rock which the Goddess Athena dropped while carrying it over Athens. As the myth goes, Athena was lending a hand to the people of Athens in the building of her grand temple, the Parthenon. She was helping them carrying rocks from Mount Pentelis to the Acropolis Hill. While flying over Athens, the Goddess heard the news that Kekrop’s daughters had opened the basket that she had trusted to them to guard it, without opening it. Inside the basket was the baby Erichthonius. The Goddess got upset and the rock fell off her hands, becoming what the Athenians would later call the hill of Lycabettus.

This is the most famous hilltop in Athens, the romantic side of town! Climb up the cable car to gaze at the capital from above, with a view as far as the port of Piraeus. Watch a concert in its open theater, have a stroll on its green slopes and create some of your sweetest memories in Athens! Lycabettus also holds many secrets… Unknown even to most Greeks, it is said that the churches hide caves and tunnels made for military reasons leading to underground Athens! At its top, you will find the chapel of St. George while at its foothills there are picturesque corners, such as Deksamenis Square in Kolonaki for wine and dine.

You may also like: Things to Do in Athens The ‘must-see’ and the local vibes 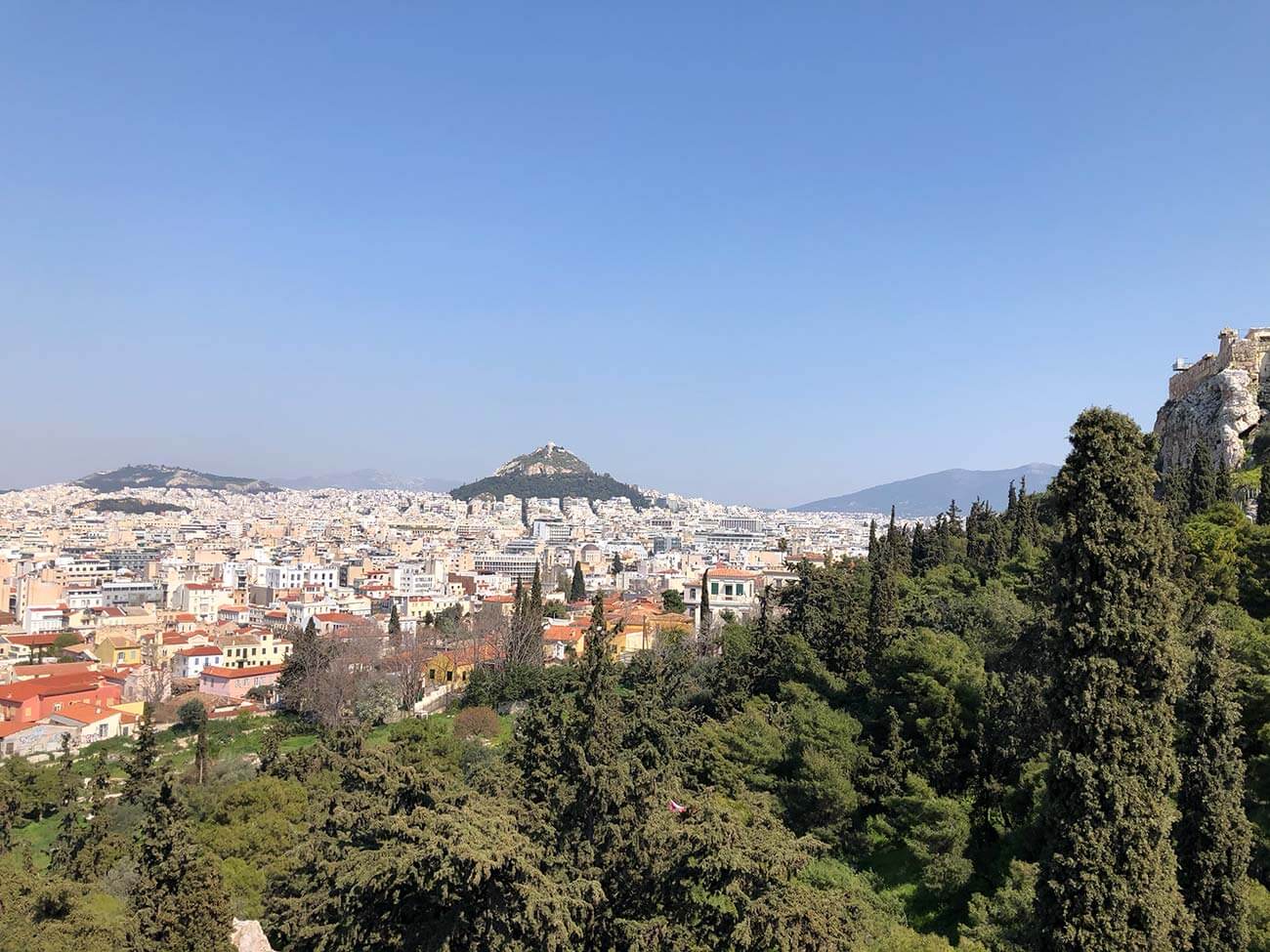 Philopappos is a combination of hills, across the Acropolis and the Areopagus Hills. Gaius Julius Antiochus Eminent Philopappos was the High Commissioner of Athens during the Roman years, and he was one of the few people buried through the city walls - on the top of the hill, where today stands the ten-meters heigh monument of his. The statues on its facade depict him, his father and his son. 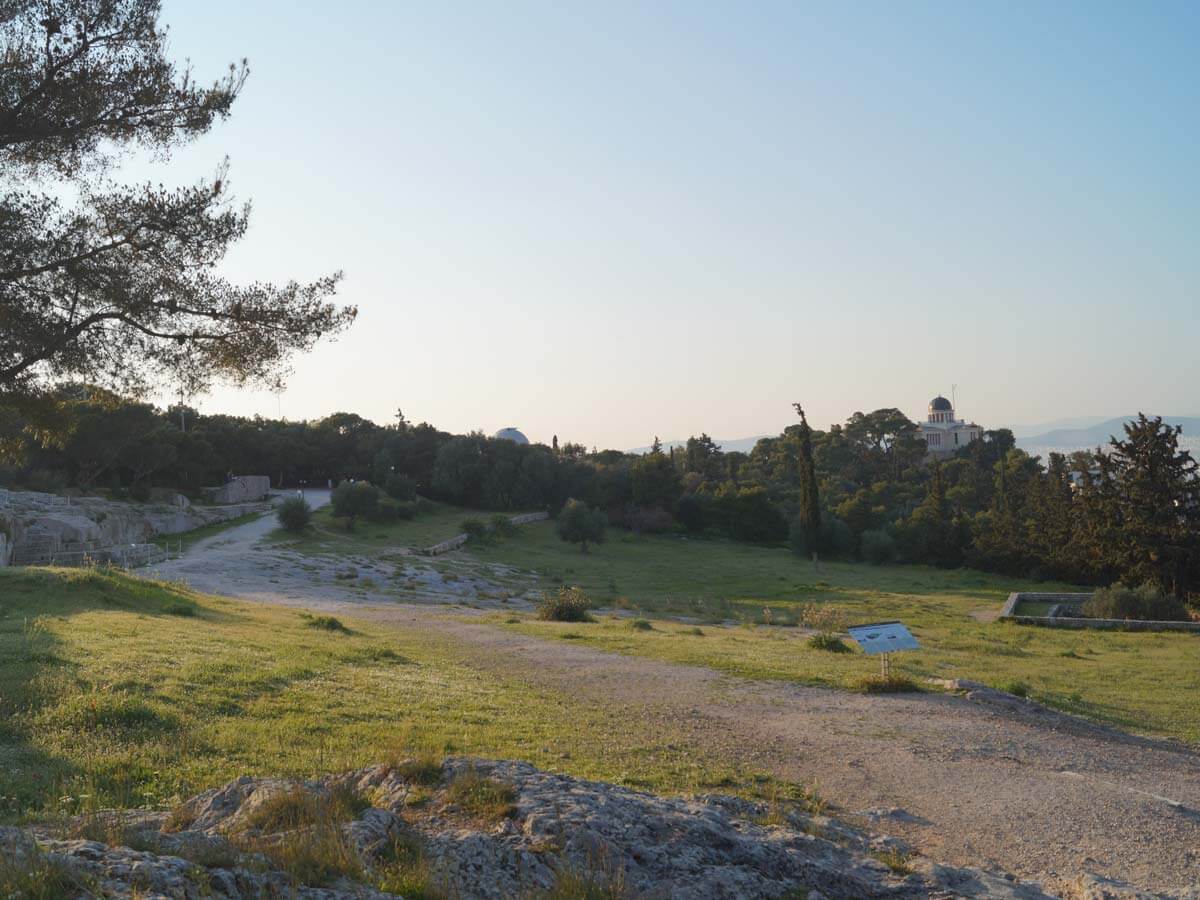 It is also known as Pnyx, Hill of the Nymphs and Hill of the Muses. At its foothill, there is a Sanctuary cave of the goat-god Pan who lived there with the spirits of the woods and the springs, the Nymphs, according to Greek Mythology. But along Pan and the Nymphs, the Nine Muses also lived on the hill, giving their name also to it. From the hill of the Nymphs begins the route that takes you to the ancient road through Koilis, which connected the Acropolis with the port of Piraeus. In some parts of it, the signs left by the wagon wheels on the road three thousand years ago are discernible even today! 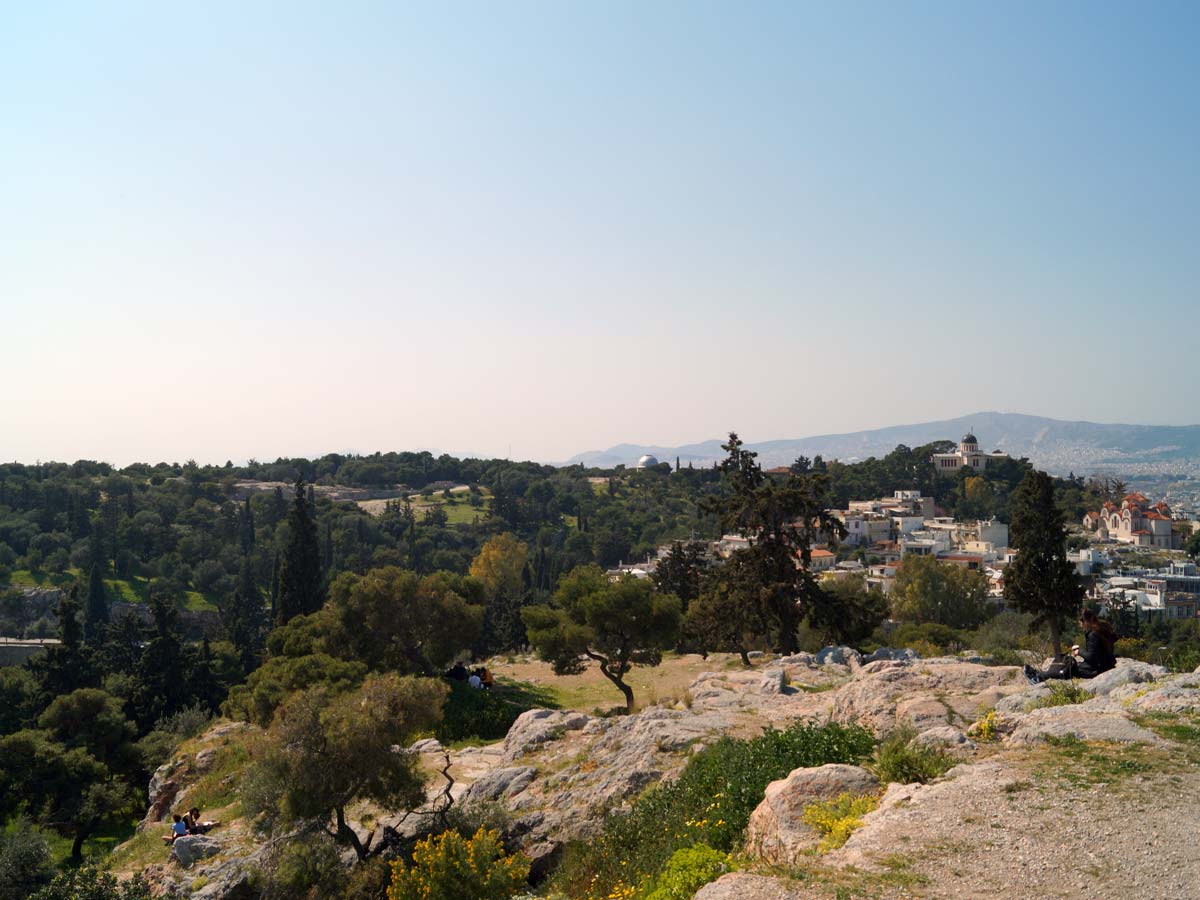 The Acropolis Hill was the one that the Ancient Athenians picked to build their fort, not because it was the highest but because it was the steepest, thus, the most difficult to fall or be looted. The ‘Sacred Rock’ of Athens houses the most important Greek temple, the Parthenon, and other very important monuments, like the Erechtheion, the Temple of Athena Nike and the Propylaea with the gallery. It is, arguably, the most important architectural and artistic complex that the Ancient Greek world inherited to the world. 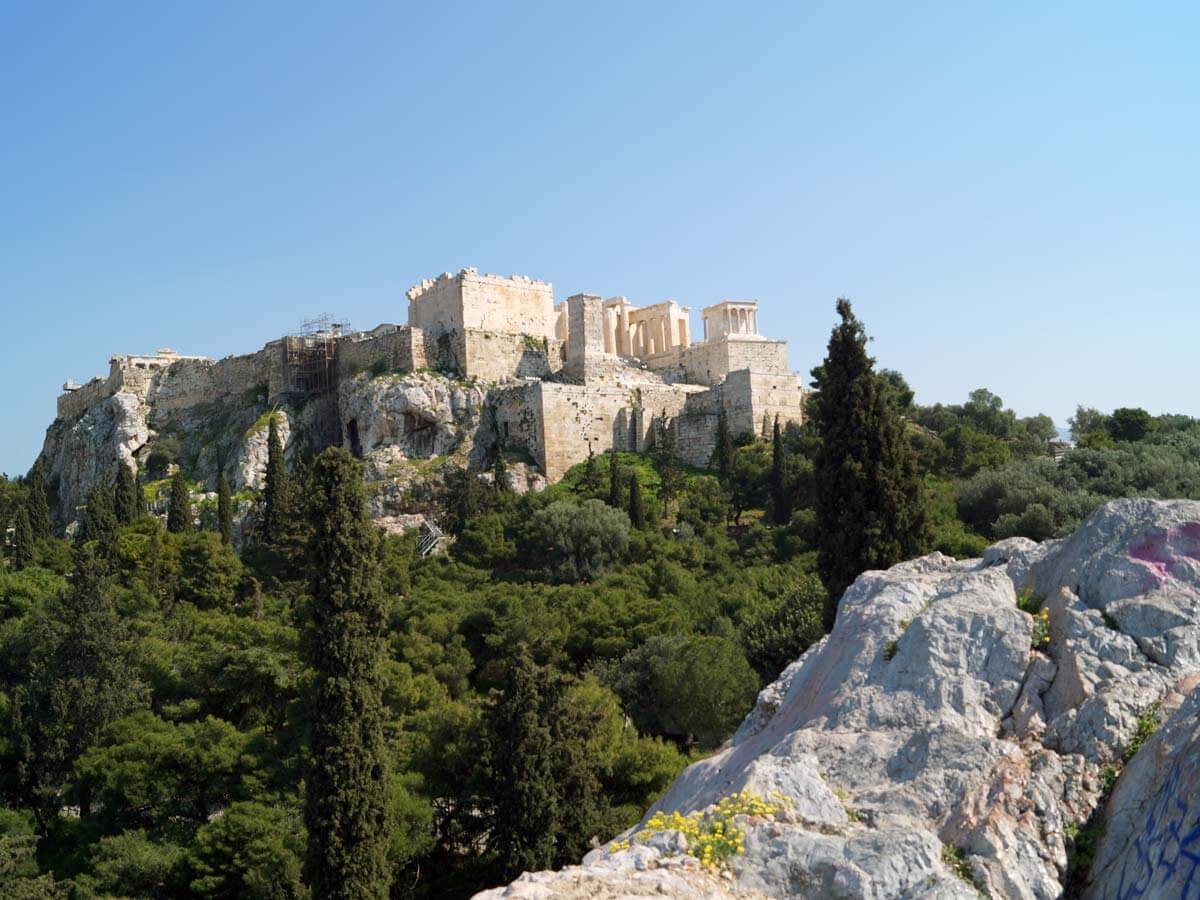 According to Greek Mythology, it was on the top of this hill that the patronage of the city was decided Poseidon and Athena both declared their intention to become the patron god of the city, which by then was known as ‘Kekropia’. The citizens and the Olympians were all gathered on the top, to watch the two candidate gods make their case. Athena offered better gifts to the city and won the challenge, thus, naming the city after her, Athens. Besides the monuments on its top, the slopes of the Acropolis Hill hide many treasures as well. The most obvious ones are the Odeon of Herodes Atticus and the ancient theater of Dionysus. But there are also sanctuaries and caves of worship hidden from the everyday visitor. Interested to discover more? Join the Acropolis Mythology Tour.

Tourkovounia hill is a rocky crest of limestone rocks, at the Attica grove. Tourkovounia are first mentioned in the "Attica" of the ancient traveler Pausanias by the name of “Anchesmos”. The name comes from the words "anche" which means near and "esmos" which means loud intrusion. The ancient name was preserved until the 3rd-5th century AD when the hill was renamed Lycovounia. It took its final name, Tourkovounia, during the Ottoman Occupation in Greece because it was part of the “Turkish” State.

In his work "Attica", Pausanias mentions that the hill was dedicated to Zeus and at the top there was a wooden statue of Zeus of Anchesmos. According to the legend, the father of the gods threw bolts of lightning and thunders from there. Pausanias even mentions that since the time of Solon the mountain concealed many dangers such as winds, savages, thunders, thieves hiding in its caves and came out to plunder the city. Archaeologists and historians report that the mountain was the grove of Eumenides, where Oedipus was driven by his daughter to wash away the sins of his family. 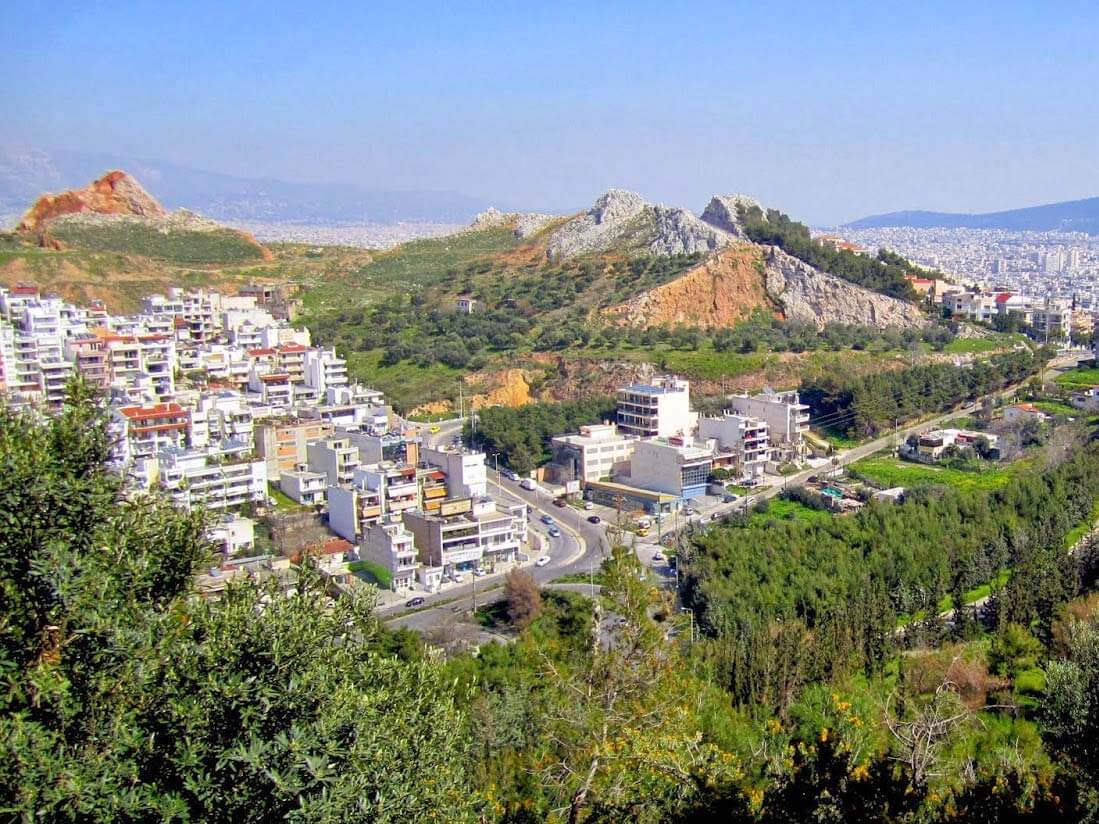 In antiquity, Kolonos was considered the most aristocratic municipality of ancient Athens. It was a riverside municipality and it was crossed by the river Kifissos, which today runs underground, under Kifissos avenue. The hill was then called "Hippios", after the temple of Hippios Poseidon, God of the Seas, the Earthquakes and horses, patron of the municipality. There was also the altar of Hippia Athena, the shrine of the Erinians, the tomb of Oedipus, as well as of the heroes Theseus, Peirithos and Adrastus.

Here was also the statue of Kolonos, who later gave his name to the municipality. Kolonos, a new district of Athens, well-known for the famous play Oedipus at Colonus, the Greek tragedy written by Sophocles. The story unfolds when Oedipus is now an elder and lives in one of the then "municipalities" of Athens, in Kolonos. Today, Kolonos is one of many districts of Athens, located on the west side of the modern city. Every year, the Epi Kolono theater festival takes place in honor of the great ancient Greek writer Sophocles. Plato’s Academy was also located in Kolonos and today someone can visit the ruins. 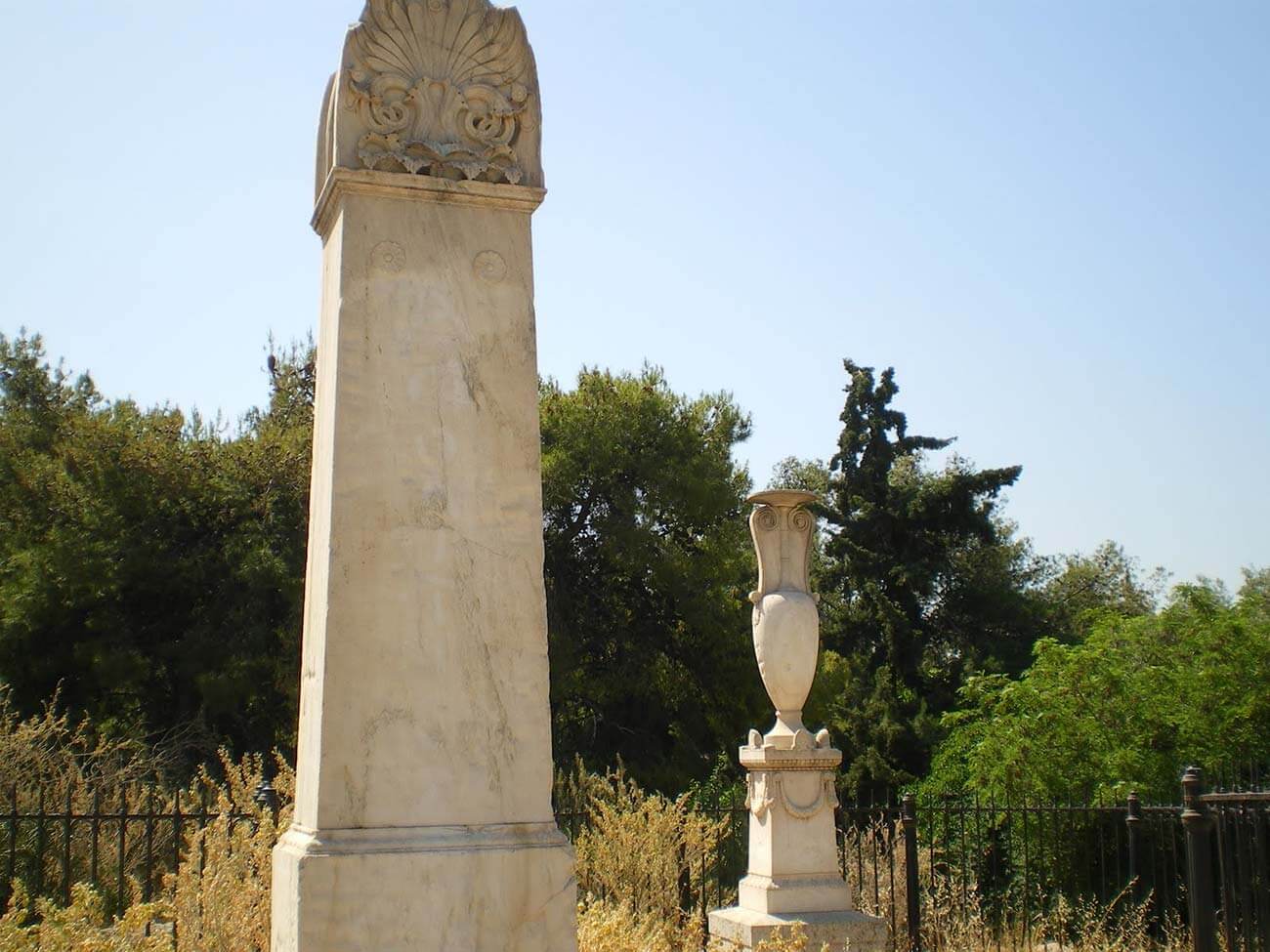 The first murder trial of all time took place right on the top of this hill. The defendant was the god of war, Ares, and he was put to trial by the other Olympians for killing the son of Poseidon. In his defense, the god of war committed murder after the victim had raped his daughter. The Olympian Gods assembled on the hill and took over the role of the judge. The Rock of Ares sits just across the Acropolis hill and it gave its name to the Supreme Criminal Court of Greece, Areios Pagos.

The myth also wants the proud female warriors, the Amazons, to make a sacrifice in honor of their father, the god Ares, on this hill. These sacrifices were the first to be made in Attica in honor of the god of war. This is also the spot from where the Apostle Paul delivered his speech to the Athenians, spreading Christianity to the Greek world. Today, it is a favorite spot for local Athenians to hang out and watch the sunset, with a panoramic view of the surrounding area and the other Hills of Athens. 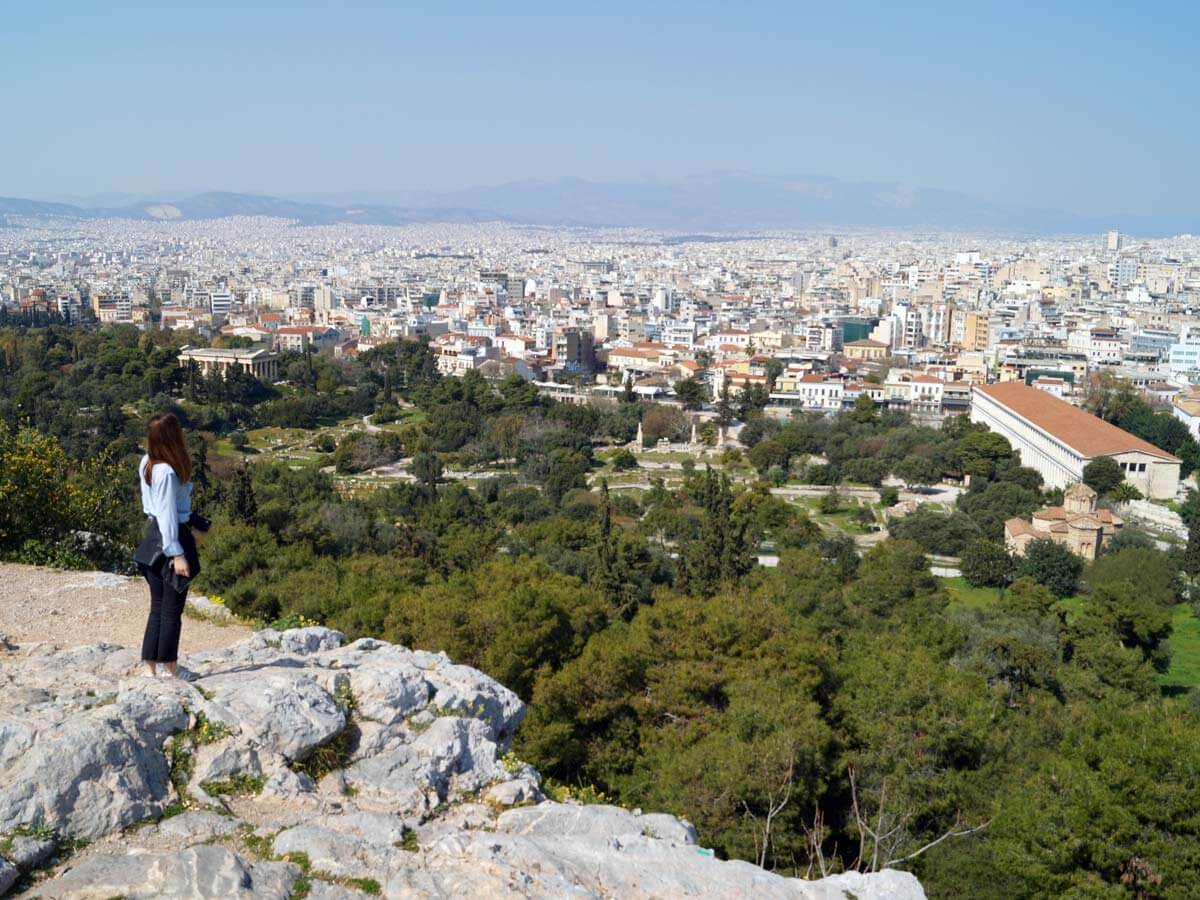 There are many myths and legends connected to the hills of Athens. Local communities can cite more stories about the hill close to where they are living. We hope that the above information offered you a useful insight into the history and myths of Athens' hills.

Women in ancient Greece: The role of women in the Classical Period
Best Time to Visit the Acropolis and Why
The Most Famous Greek Dances (video)
One Day in Hydra: Best Things to Do (Insider Guide)
Kallos: The Ancient Greek Ideal for Beauty
Sparta: Things to do and see in the Greek city
A Sightseeing Itinerary for your Holiday to Mykonos
Things to Do in Athens: The ‘must-see’ and the local vibes
Customs in Ancient Greece Associated with September
How Athens got its name: The name-giving myth
Greek Mythology Monsters: Full list and description
Castles of Peloponnese: Discover Medieval Greece
Greek Mythology Books you need to read (for adults & kids)
Hercules: The Life and Labors of the Greek Hero
The Greek Gods: Full List and Background
Athens in October: Reasons to Visit Athens This Month
The Parthenon: 10 Surprising Facts about the Temple
Creating your Dream Vacation with Tailor-made Tours in Greece
Day Trips from Athens - Where the Locals Go
Caryatids: The Daughters of Athens
The Buried Rivers of Athens
300: Movie Vs. Reality
6 Greek Myths to Know Before Visiting Athens
10 Landmarks and Monuments You Should Not Miss in Athens
Greece from Home: 10 Ideas for a Virtual Athens Tour
The Apple of Discord and the Fairest of Them All
20 Most Famous Greek Mythology Movies
The Panhellenic Games of Ancient Greece
Interview With a Local: Ancient Greek Rituals and the Alternative Athens
The Delphic Idea
Meet the Olympian Gods
The Great Plague of Athens: Lessons from the Past
Best Walking Tours in Athens, Magical Walking Routes
Private Tours in Athens: The Benefits of Booking in Private
Acropolis Tour: Why a Guided Tour is Necessary
9 Things to Know About Eleusis The European Capital of Culture 2023
Battles of Ancient Greeks That Shaped Western Civilization
9+1 Unique Things to Do in Athens this Summer for Free
The Role of Greek Mythology in the Creation of Athenian Wonders
Mysteries of Ancient Greece You Didn't Know About
Top 10 Alternative Destinations in Greece
The 10 Best Places to Visit in Greece
10 Sights to Tour in Athens and Bring Greek Mythology to Life
Top 10 Tips to Know Before Traveling to Athens
10 Things to Do in Delphi Home to the Oracle of Apollo
Symposia in Ancient Greece: Reviving the Ancient Custom
30 of the Most Famous Tales from Greek Mythology
Interview with a Local: Greek Neoclassicism and the Unseen Athens
10 Things you didn't Know about Ancient Greeks
10+3 Things to Do in Athens on a Rainy Day
10+1 Things to Do in Athens to Time Travel to Ancient Greece
How to Travel in Greece Differently: a Guide for Delving Deeper into the Greek Culture