How Athens got its name: The name-giving myth

Athens is the capital and largest city of Greece. It is one of the oldest cities in the world, with its recorded history reaching up to 3,200 BC! Athens is well-known as the birthplace of Democracy but how Athens got its name? The roots of the story for the name-giving of Athens are traced in Greek mythology…

Acropolis painting in Athens by Leo von Klenze from 1846

Ancient Athens, a walled city, was a powerful city-state, developed in parallel with its port, which was originally Faliro and later Piraeus. Center of the arts and philosophy, the seat of the famed Academy of Plato and the Lyceum of Aristotle, Athens is widely referred to as the cradle of Western civilization, mainly due to the influence of its cultural and political achievements in the 5th and 4th centuries BC.

How Athens was called before

The original name of Athens was Aktaio or Akti and it was taken from its first king, Aktaios. Its second name, Kekropia, was derived from King Kekropas. The history of Athens, the once-mighty city-state of antiquity, begins thousands of years ago and it is fascinating. Whoever knows even a little of this long history, can only feel awe and admiration when they walk in the streets of the city. Wondering in the alleys under the shadow of the Parthenon is like taking a journey through time and following in the footsteps of great ancestors. But how come this famous city came to be known as Athens? 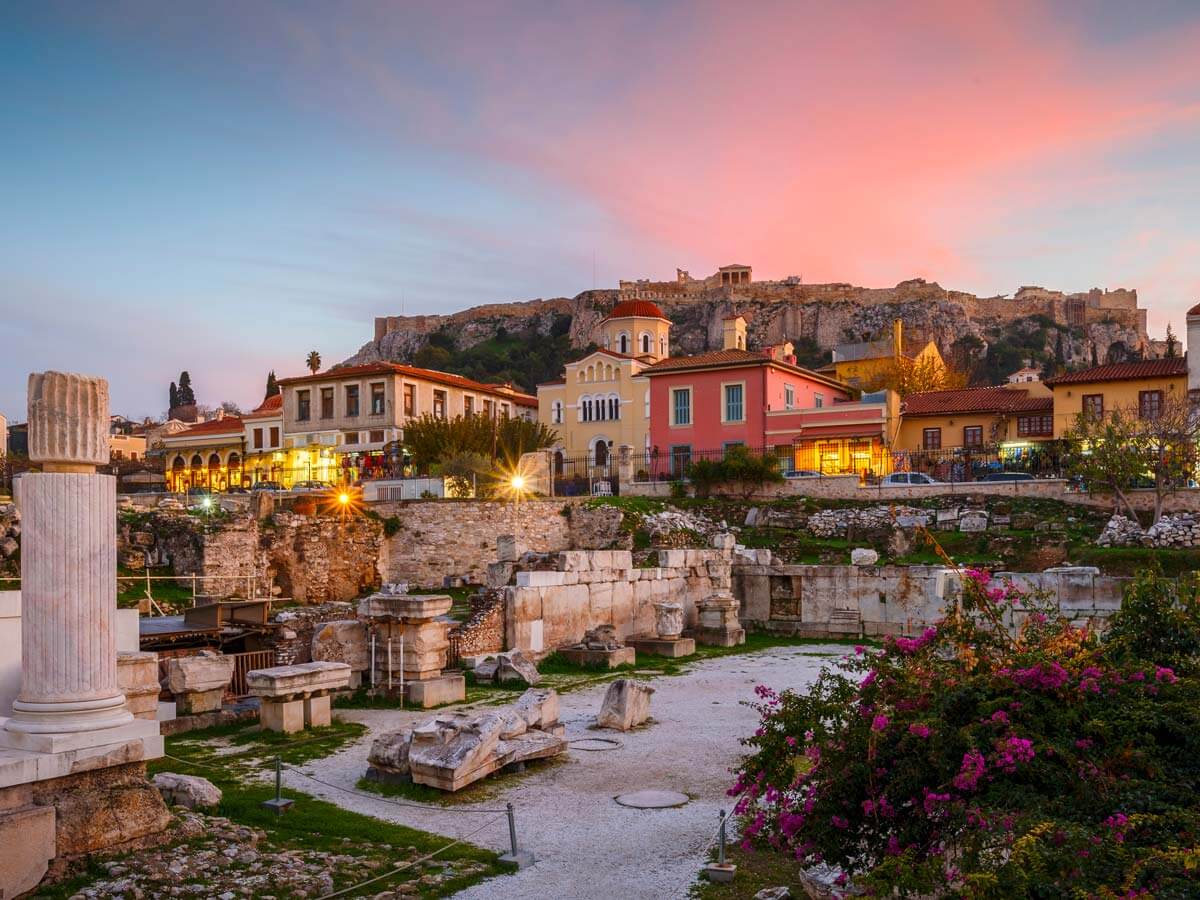 The myth for the name-giving of Athens

The answer seems to be given in a myth of antiquity that was almost lost in the depths of time and concerns the quarrel between two mighty gods of Olympus for the domination of the city. According to Greek mythology, the present capital of Greece is named after the goddess Athena, who prevailed in the confrontation with the sea god Poseidon. A special court was set up on the top of Acropolis Hill and a vote followed for the new patron god of the city.

At that time, the gods wanted to have cities under their patronage (protection), so that the people would honor them by building temples and offering sacrifices and gifts to them. So they began to divide the cities among themselves, but when two gods wanted the same city they ended up quarreling with each other. This was the case with Athens since Poseidon and Athena both challenged the patronage of the city.

The witness of this divine controversy was the king of Kekropia (as Athens was called then), Kekropas, a half-man half-snake creature. According to another version of the same myth, King Kekropas served as the judge to decide the quarrel. 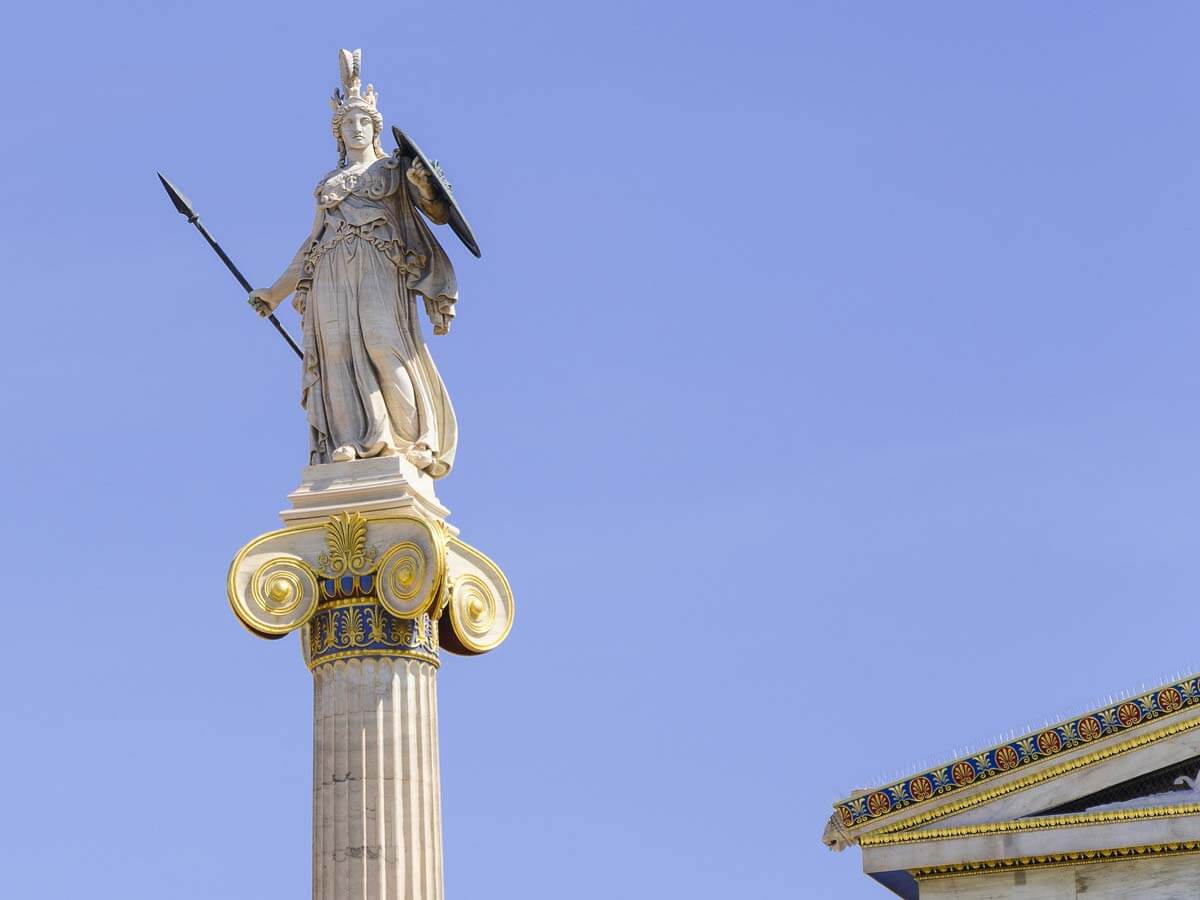 The remaining gods of Olympus arrived on Acropolis Hill, who had a panoramic view of the city, to be the judges of this quarrel. The scene was set and the battle-ready to begin! It was decided that whoever offers the best gift to the city, he/she will be the winner!

Poseidon presented his gift first. He stepped forward and with his trident gave a powerful blow to the rocky ground. Immediately, water sprang from the ground, forming a small lake, which was called the "Erechtheida Sea". But the water was sea-water thus, salted and not drinking water.

It was then Athena's turn to present her gift. She stepped forward and planted a seed on the rock. Immediately, an olive tree sprouted in the ground, full of fruits. (It was a tree that would survive for thousands of years - rumor has it that, the olive tree we see today on the Acropolis next to the Erechtheion building is Athena’s, sprouting again and again within the centuries.

After both gods had offered their gift, Zeus asked Kekrops for this opinion. The King glanced around from the high rock, but wherever he turned, his eyes met sea water (salty water). But the tree that Athena had made grow was the first in the whole country and was for the city a promise of glory and happiness. The olive tree can offer oxygen, shadow, food, olive oil, wood for the winter… It was truly a unique and useful gift. 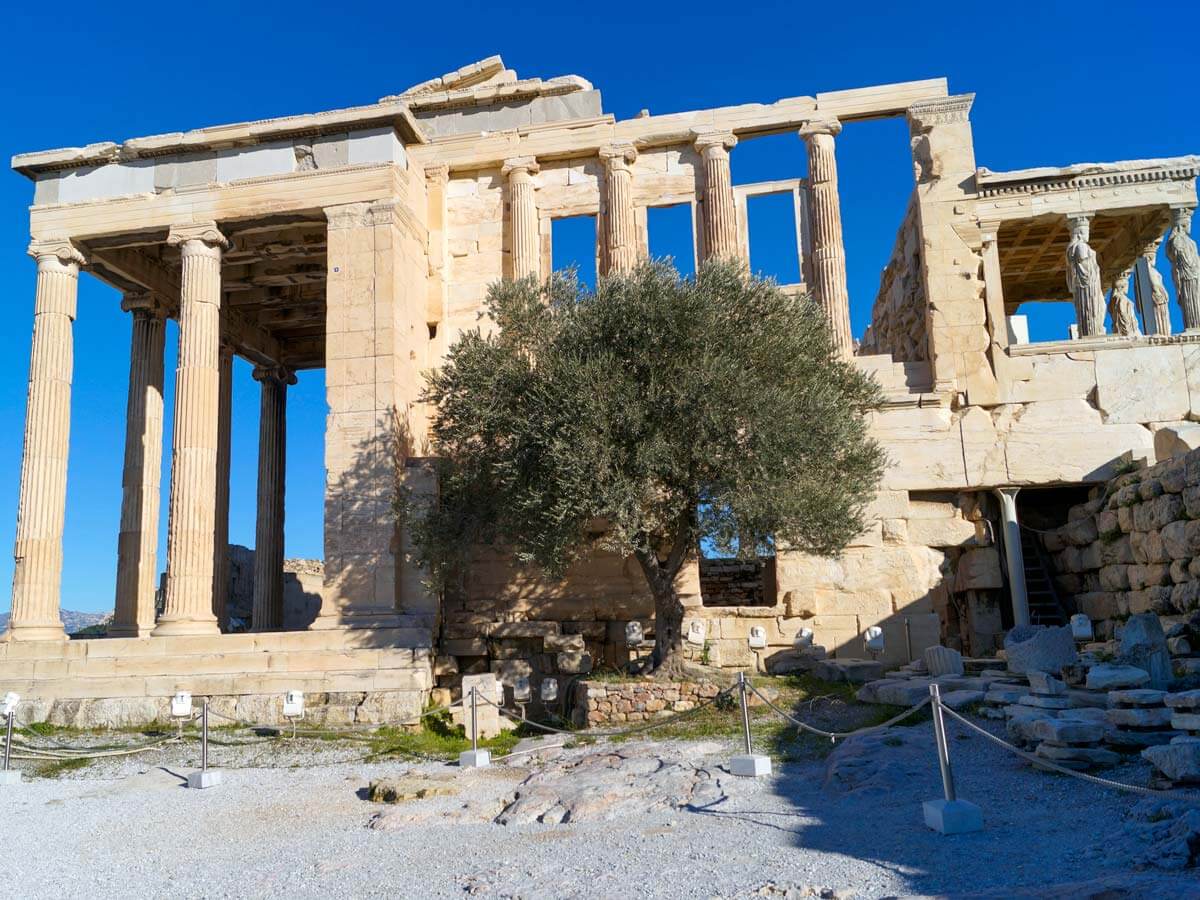 It was therefore judged that Athena's gift was more useful and she was given the patronage of the city. And so Athens was renamed, after the goddess of wisdom, Athena! Poseidon, however, got angry with the decision and cursed the city to never have enough water. And so the problem of water scarcity that plagued the city from that time began.

Women in ancient Greece: The role of women in the Classical Period
Best Time to Visit the Acropolis and Why
The Most Famous Greek Dances (video)
One Day in Hydra: Best Things to Do (Insider Guide)
Kallos: The Ancient Greek Ideal for Beauty
Sparta: Things to do and see in the Greek city
A Sightseeing Itinerary for your Holiday to Mykonos
Things to Do in Athens: The ‘must-see’ and the local vibes
Customs in Ancient Greece Associated with September
The Hills of Athens and the Myths Connected to them
Greek Mythology Monsters: Full list and description
Castles of Peloponnese: Discover Medieval Greece
Greek Mythology Books you need to read (for adults & kids)
Hercules: The Life and Labors of the Greek Hero
The Greek Gods: Full List and Background
Athens in October: Reasons to Visit Athens This Month
The Parthenon: 10 Surprising Facts about the Temple
Creating your Dream Vacation with Tailor-made Tours in Greece
Day Trips from Athens - Where the Locals Go
Caryatids: The Daughters of Athens
The Buried Rivers of Athens
300: Movie Vs. Reality
6 Greek Myths to Know Before Visiting Athens
10 Landmarks and Monuments You Should Not Miss in Athens
Greece from Home: 10 Ideas for a Virtual Athens Tour
The Apple of Discord and the Fairest of Them All
20 Most Famous Greek Mythology Movies
The Panhellenic Games of Ancient Greece
The Delphic Idea
Meet the Olympian Gods
The Great Plague of Athens: Lessons from the Past
Best Walking Tours in Athens, Magical Walking Routes
Private Tours in Athens: The Benefits of Booking in Private
Acropolis Tour: Why a Guided Tour is Necessary
9 Things to Know About Eleusis The European Capital of Culture 2023
Battles of Ancient Greeks That Shaped Western Civilization
The Role of Greek Mythology in the Creation of Athenian Wonders
Mysteries of Ancient Greece You Didn't Know About
Top 10 Alternative Destinations in Greece
The 10 Best Places to Visit in Greece
10 Sights to Tour in Athens and Bring Greek Mythology to Life
Top 10 Tips to Know Before Traveling to Athens
10 Things to Do in Delphi Home to the Oracle of Apollo
Symposia in Ancient Greece: Reviving the Ancient Custom
30 of the Most Famous Tales from Greek Mythology
Interview with a Local: Greek Neoclassicism and the Unseen Athens
10 Things you didn't Know about Ancient Greeks
10+3 Things to Do in Athens on a Rainy Day
10+1 Things to Do in Athens to Time Travel to Ancient Greece
How to Travel in Greece Differently: a Guide for Delving Deeper into the Greek Culture