Castles, gardens, Lords and Ladies, medieval pavements, old legends… No, we are not going to talk about Northern Europe, but our very own Mediterranean Greece, and particularly the most medieval part of it, the Peloponnese! This land of Pelops is filled with castles scattered all around. You can see them everywhere, small and large, Byzantine, Frankish, and Venetian. It is a region that was occupied multiple times by different cultures across the centuries. With their evocative beauty, these castles stand reminiscent of glorious days. Below, we talk about the 7 most majestic castles of the Peloponnese that you should definitely visit.

The largest castle in the Peloponnese is, as the legend goes, the work of Sisyphus, the ancient king of Corinth. As the myth goes, Sisyphus’ eyes once caught Zeus and Aegina fooling around in a way that the beautiful girl's father would not approve of. And her father was not just anyone, he was the river god Asopos. So Sisyphus did not waste any moment, he went to the worried father and promised to tell him where Zeus was ‘fooling around' with his daughter, on one condition: He needed a constant source of fresh water on his castle.

And from that time on, the Acrocorinth became a large and mighty castle city. During history, the castle changed so many hands that today it is very difficult to classify it in a specific period; some say that this is an ancient castle, some say Byzantine, Venetian, or Ottoman. Nonetheless, it is a beautiful castle with a compelling story! 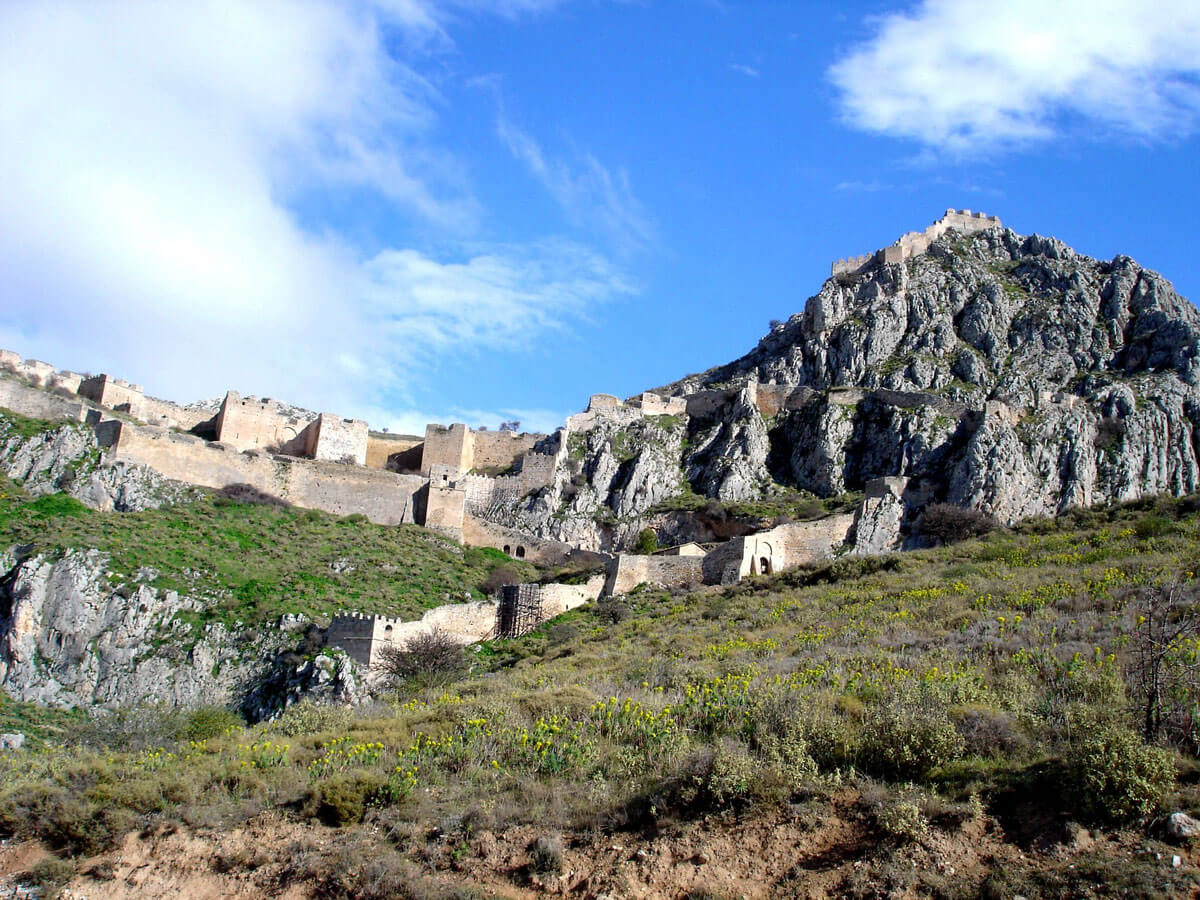 This mesmerizing castle is, without a doubt, one of the most beautiful castles in the world. It was built in 583, during the reign of Byzantine Emperor Mauricius. It was quickly evolved into a very important stronghold and shelter during raids. During the centuries, it changed many hands. Today, it is one of the best destinations in the Peloponnese, especially during Easter. Once in Peloponnese, this should definitely be one of your destinations. 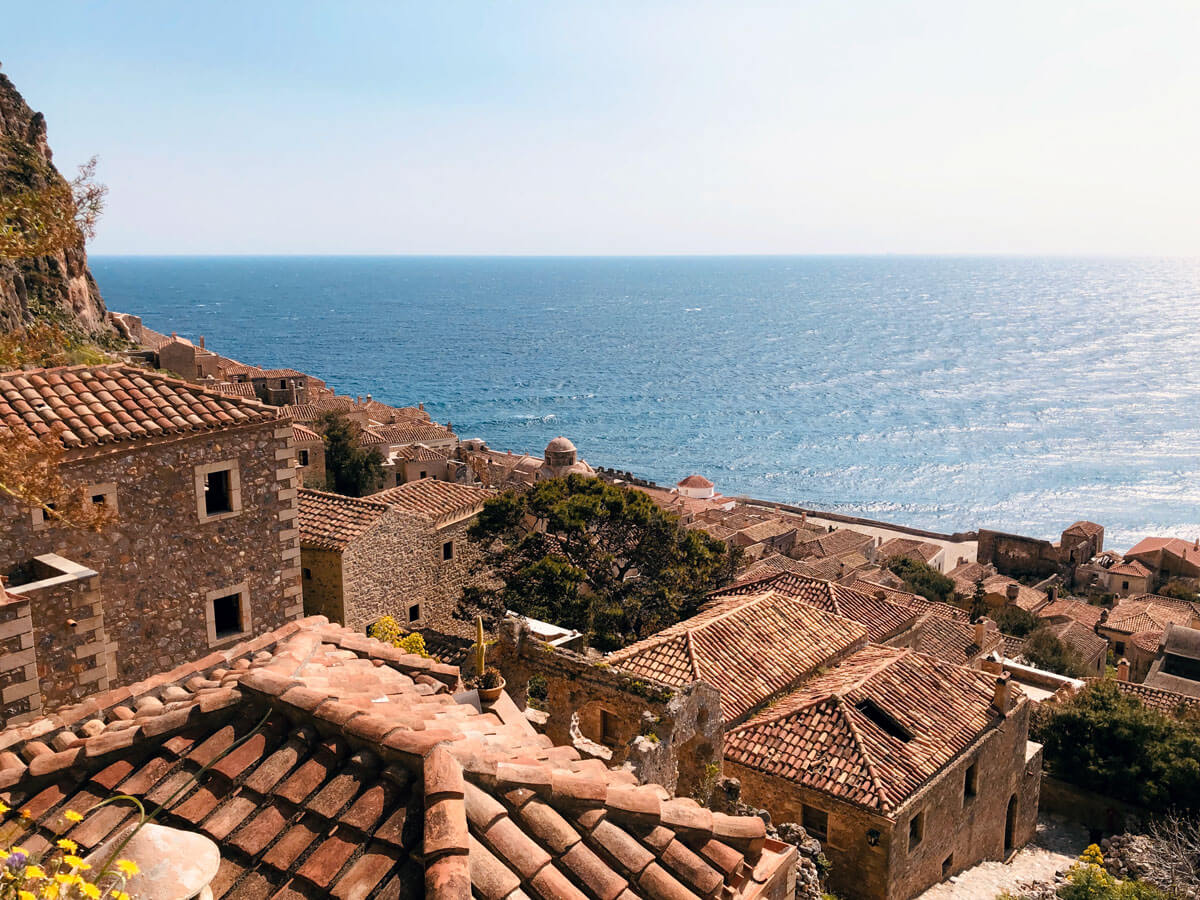 The Castle of Rio belonged to a very powerful Ottoman, Suleiman's grandfather, and it was built in 1499. The "Kastelli of Moria", as it is also known, together with the “Kastelli of Roumeli” in Antirrio, are today the best-preserved Ottoman castles in Greece. The Castle of Rio is protected by the sea from three sides (even its moat is still filled with seawater). It has two gates, one on land and one on the sea, and together with the Castle of Antirrio, it was blocking the entrance so well that the Ottomans used to say that "not a single bird flies among them". The Castle of Rio is visitable and it is located right next to the great bridge of Rio-Antirio, just a few hours away from the cosmopolitan city of the Peloponnese, Patras. 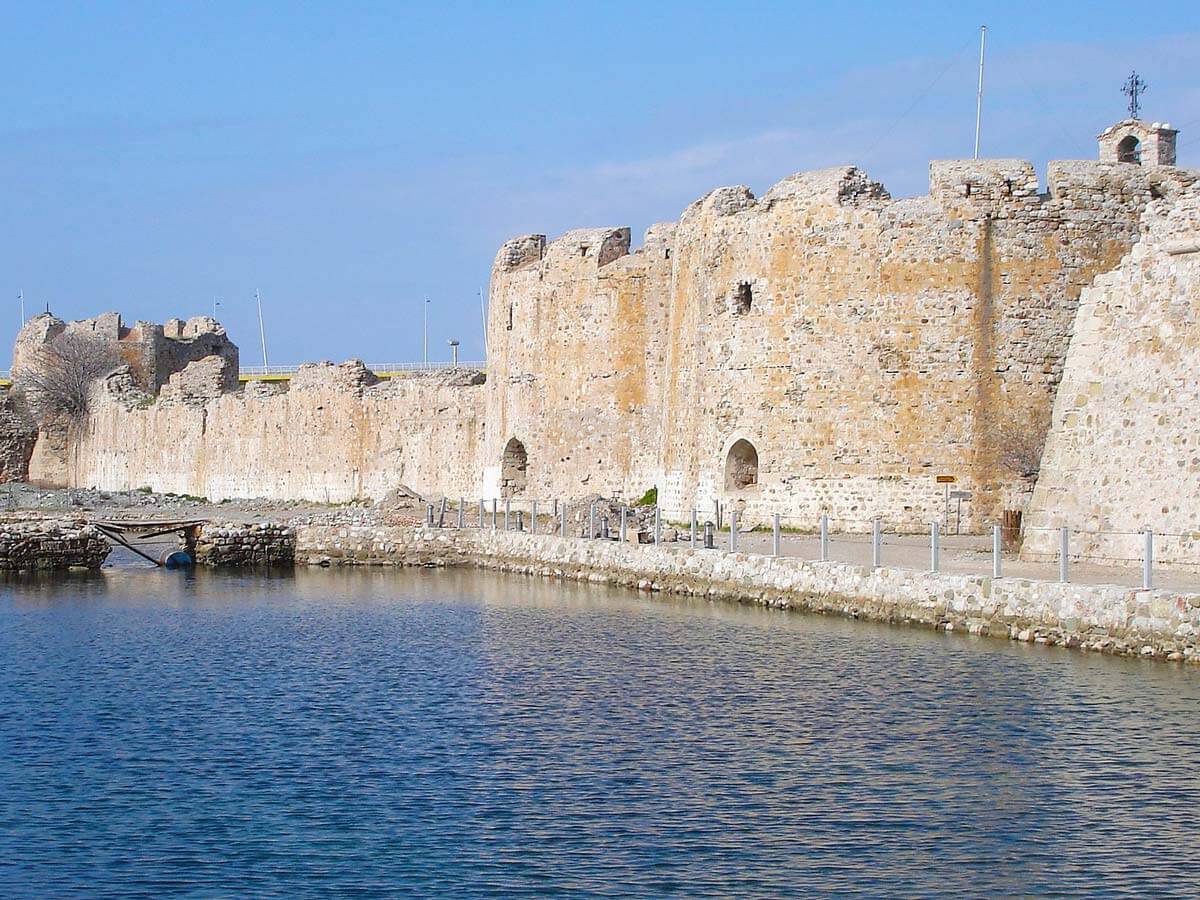 Niokastro (or ‘Newcastle’ in a literal translation) was built by the Ottomans during their occupation of the region. The Ottomans, as the legend goes, had a fleet that had never lost a battle since the founding of their empire in 1299. But, because no one can stay undefeated forever, at some point in 1571 they did not just lose, but they suffered an utter disaster in the Battle of Nafpaktos. Two years later, they built the Castle of Pylos in the Peloponnese as a stronghold, to avoid any future disasters. Today, Niokastro is one of the most beautiful castles in Greece. It now houses the Archaeological Museum of Pylos, as well as several buildings that have either been restored or saved in good condition. 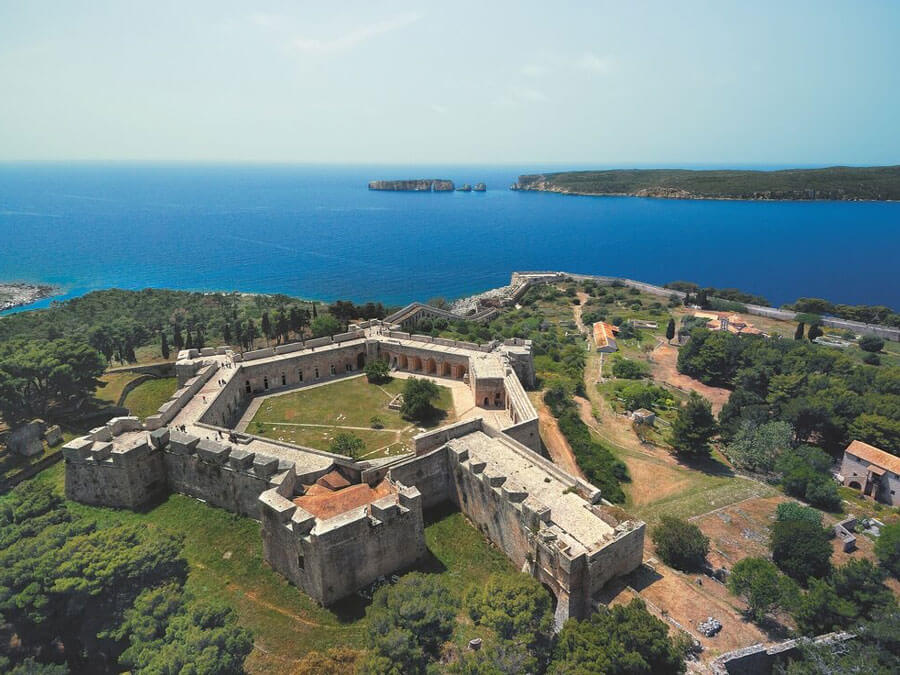 As the myth goes, Palamides was a warrior who fought in the Trojan War, but he never came back home. He was accused by Odysseus (Ulysses) of treason and was murdered. To take revenge, his father, Nafplios, sent his remaining sons to seduce the wives of the Greek leaders. All succumbed except Penelope, Odysseus’s patient wife.

The Palamidi fortress was completed in 1714 and it is one of the most beautiful castles of Greece, as well as the biggest and most well-preserved fortress of the Venetian rule. It has a rich history and a very important role during the Greek revolution against the Ottomans. When you visit, try to climb all 999 steps to reach its top and admire the magnificent view from the top, with the whole town of Nafplion below and the Bourtzi Castle in the sea. 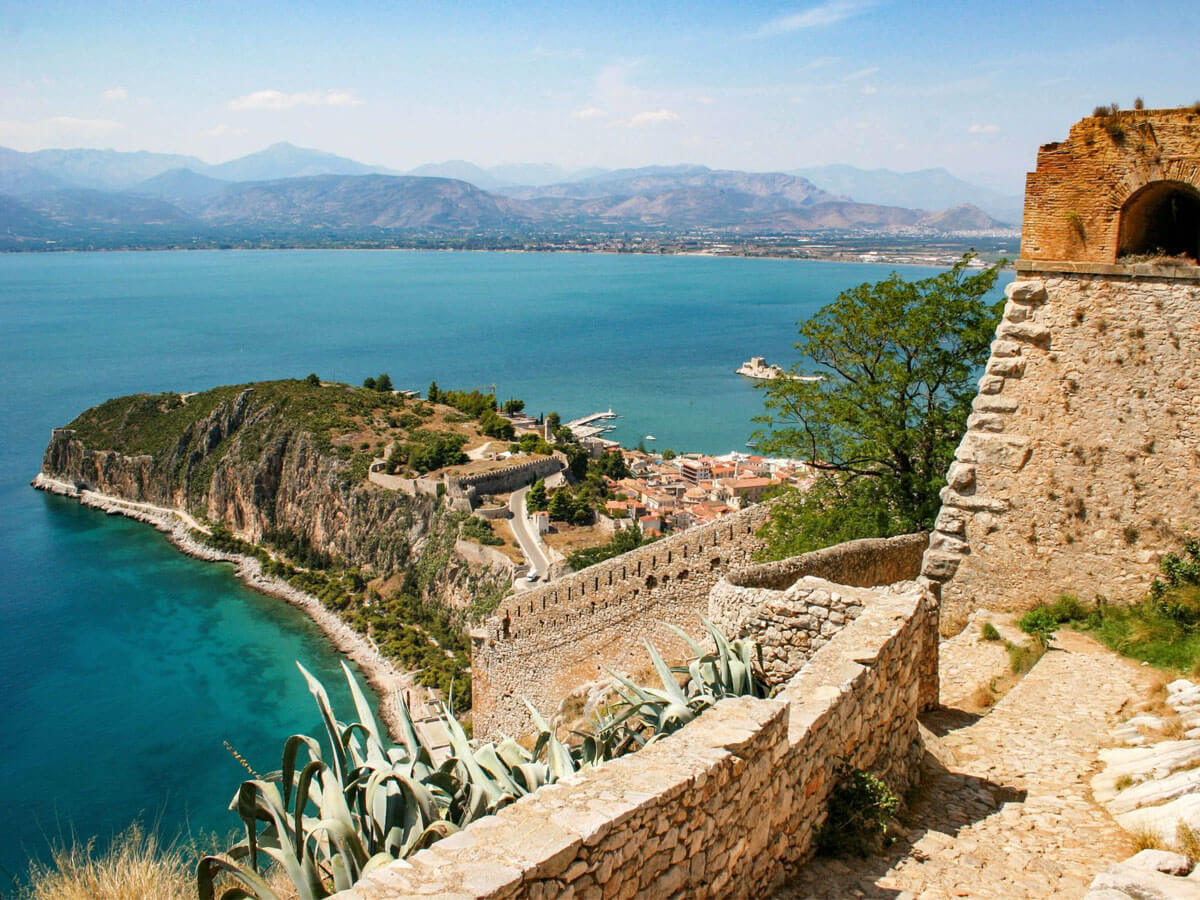 One of the most elegant examples of a Venetian fortress and one of the few castles which houses and temples are still preserved inside, the castle of Koroni dominates almost the entire cape of Akrita in the Peloponnese, at the southern end of the Messinian Gulf. It was built by the Venetians in the 13th century and was strengthened by the Ottomans in the 16th century. The picturesque uphill route, which starts from the pier, takes us back centuries as we meet parts of both the pre-existing Byzantine castle and the ancient fortification.

The narrow cobbled streets lead us to the main gate of the castle, on the north side. Here, the whole settlement was concentrated in its attempt to protect itself from the invasions of the conquerors and of course, pirates! Today, however, few houses are inhabited. Inside the castle, there are carved tombs, underground vaulted tanks made of chipped boulders to collect rainwater, the octagonal tower - a sample of Ottoman architecture - the churches of Hagia Sophia (Byzantine church of the 12th century) as well as the monastery of Ioannis Prodromos. When you visit, make sure to stop at the plateau of the castle to admire the stunning view! 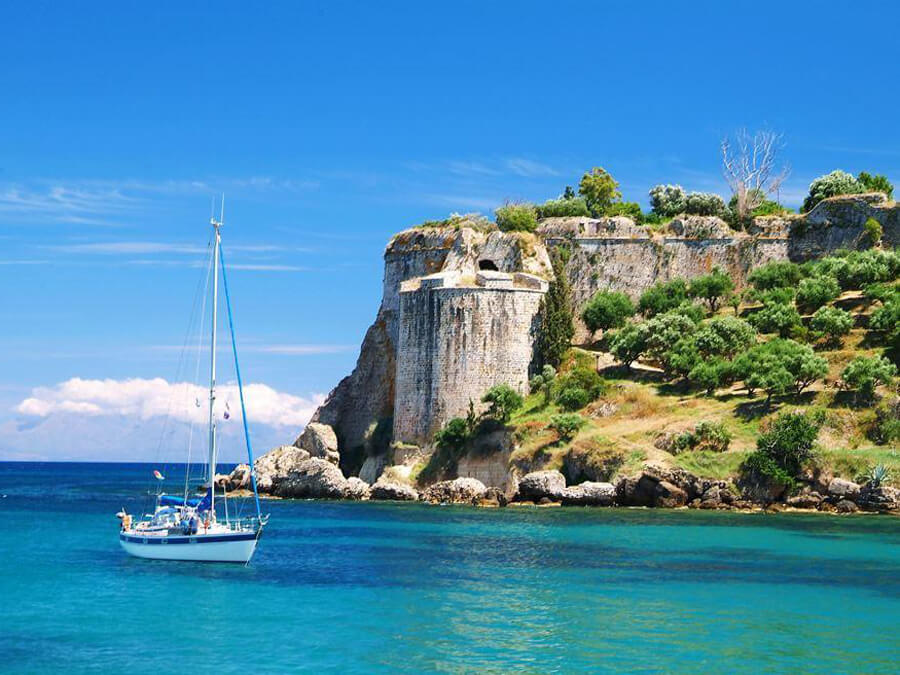 Built by the Venetians in the early 13th century on a rocky peninsula, the huge castle, one of the largest in the Mediterranean, occupies the entire area of the cape on the west coast. Its three sides are bathed by the sea while the north, which faces the land, is strongly fortified by a citadel. The entrance is impressive! It is a stone arch bridge with 14 arches - built by the Venetians where one older, wooden, used to exist - to connect the castle to the mainland. 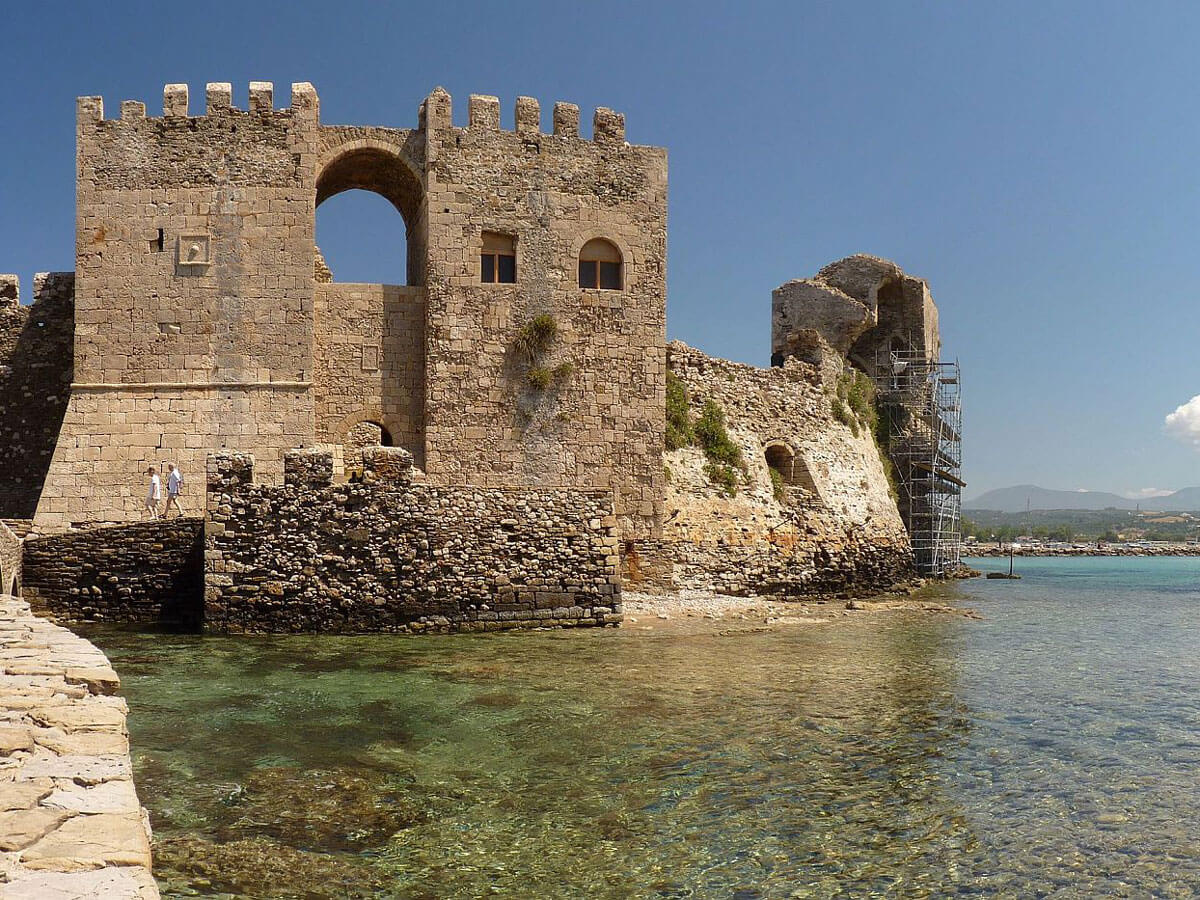 The imposing gate of the castle, decorated with reliefs, is the most imposing point. The built-in lion of St. Mark, a symbol of Venice, definitely stands out. Coats of arms, inscriptions, ruins of houses of Venetian lords, remains of two Ottoman baths, parts of the Byzantine church of Hagia Sophia, the chapel of Agia Sotira (built in 1830 from the French Liberation) are just a few of the castle's attractions.

From the restored Sea Gate begins a paved road that leads to the fortified island of Bourtzi, at the southern end of the castle. The octagonal two-story building was built by the Venetians in 1500, as a bastion to protect the port. During the Ottoman occupation, it functioned as a prison and place of executions. In fact, the locals claim that when the wind blows, the cries of the prisoners reach the ears of the inhabitants even today... The most beautiful time to enjoy the stunning view of the castle is during the sunset when the sun illuminates the massive walls and the Ionian sea. A truly mesmerizing view and a majestic castle in the Peloponnese! 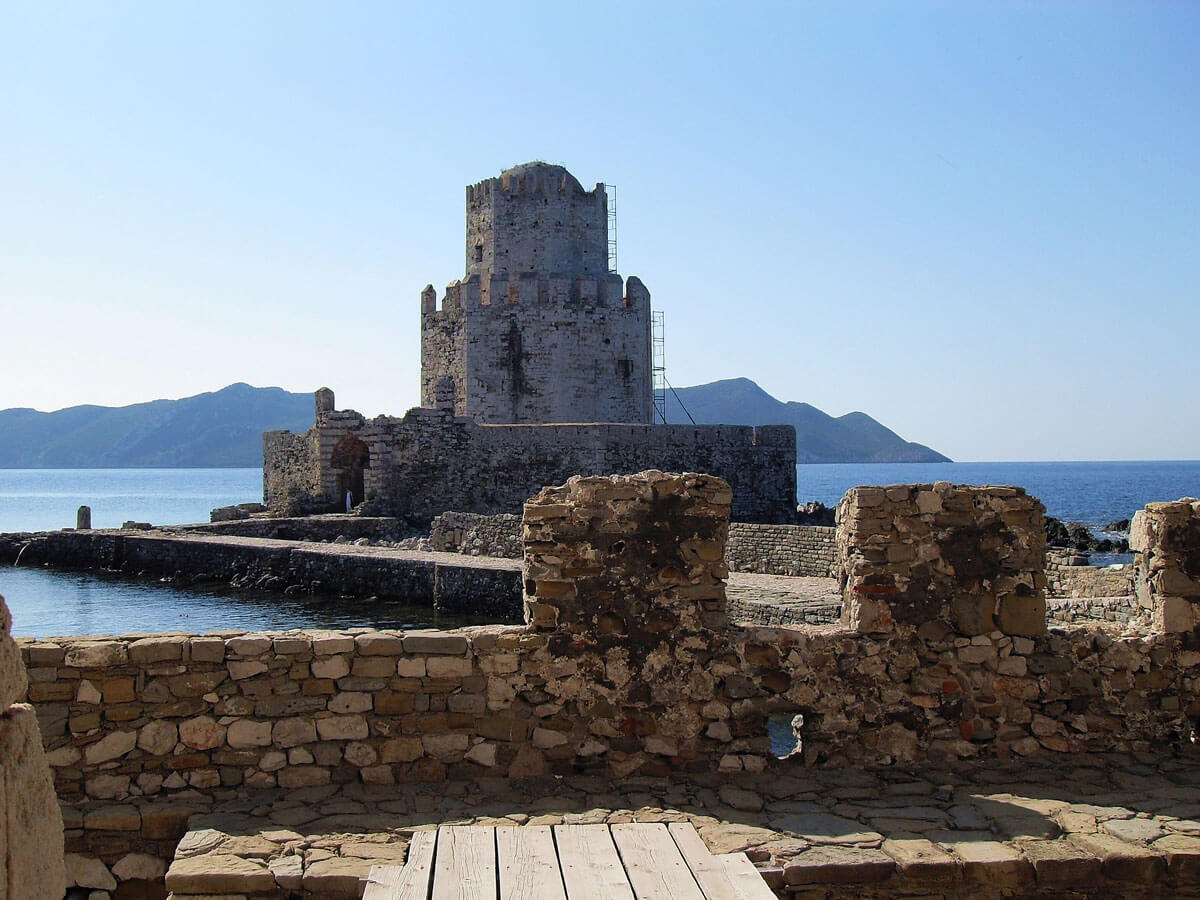 Women in ancient Greece: The role of women in the Classical Period
Best Time to Visit the Acropolis and Why
The Most Famous Greek Dances (video)
One Day in Hydra: Best Things to Do (Insider Guide)
Kallos: The Ancient Greek Ideal for Beauty
Sparta: Things to do and see in the Greek city
A Sightseeing Itinerary for your Holiday to Mykonos
Things to Do in Athens: The ‘must-see’ and the local vibes
Customs in Ancient Greece Associated with September
How Athens got its name: The name-giving myth
The Hills of Athens and the Myths Connected to them
The Greek Gods: Full List and Background
Athens in October: Reasons to Visit Athens This Month
The Parthenon: 10 Surprising Facts about the Temple
Creating your Dream Vacation with Tailor-made Tours in Greece
Day Trips from Athens - Where the Locals Go
Caryatids: The Daughters of Athens
The Buried Rivers of Athens
300: Movie Vs. Reality
6 Greek Myths to Know Before Visiting Athens
10 Landmarks and Monuments You Should Not Miss in Athens
Greece from Home: 10 Ideas for a Virtual Athens Tour
The Apple of Discord and the Fairest of Them All
20 Most Famous Greek Mythology Movies
The Panhellenic Games of Ancient Greece
The Delphic Idea
The Great Plague of Athens: Lessons from the Past
Best Walking Tours in Athens, Magical Walking Routes
Private Tours in Athens: The Benefits of Booking in Private
Acropolis Tour: Why a Guided Tour is Necessary
9 Things to Know About Eleusis The European Capital of Culture 2023
Battles of Ancient Greeks That Shaped Western Civilization
The Role of Greek Mythology in the Creation of Athenian Wonders
Mysteries of Ancient Greece You Didn't Know About
Top 10 Alternative Destinations in Greece
The 10 Best Places to Visit in Greece
10 Sights to Tour in Athens and Bring Greek Mythology to Life
Top 10 Tips to Know Before Traveling to Athens
10 Things to Do in Delphi Home to the Oracle of Apollo
Symposia in Ancient Greece: Reviving the Ancient Custom
30 of the Most Famous Tales from Greek Mythology
Interview with a Local: Greek Neoclassicism and the Unseen Athens
10 Things you didn't Know about Ancient Greeks
10+3 Things to Do in Athens on a Rainy Day
10+1 Things to Do in Athens to Time Travel to Ancient Greece
How to Travel in Greece Differently: a Guide for Delving Deeper into the Greek Culture