Type to Search
Kallos:
The Ancient Greek Ideal for Beauty

The ancient Greek word "Kallos" means "beauty" and is associated with both women and men. However, the meaning of "Kallos" in its ultimate dimension, is not just a word that means only "beauty". It is an ideal that developed in ancient Greek thought, was expressed through the epic (8th century BC) and lyric (7th - 6th century BC) poets and was gradually crystallized in the texts of the philosophers of the 5th / 4th c. BC. who, from then on, referred to it as a combination of physical appearance and the virtues of the soul.

Marble statue of Artemis, Roman copy of an original work of the 4th c. BC. (ancient Messina, ca 2nd c. BC.) - Photo credit: Irini Miari / Ephorate of Antiquities of Messinia

"Kallos" as a concept that includes natural beauty and mental virtues begins to crystallize in ancient Greek philosophical thought during the Archaic period (6th century BC) and then during the Classics (5th - 4th century BC) and Hellenistic times (3rd - 2nd century BC). Through a series of works of exceptional art, mainly sculptures, of the Archaic and Classical period, the rendering of the human form and its ethos is given. The statue of a Kore, the Kore of Chios, stands out, among others, as well as the bust of a female figure from a burial monument of Rhodes. 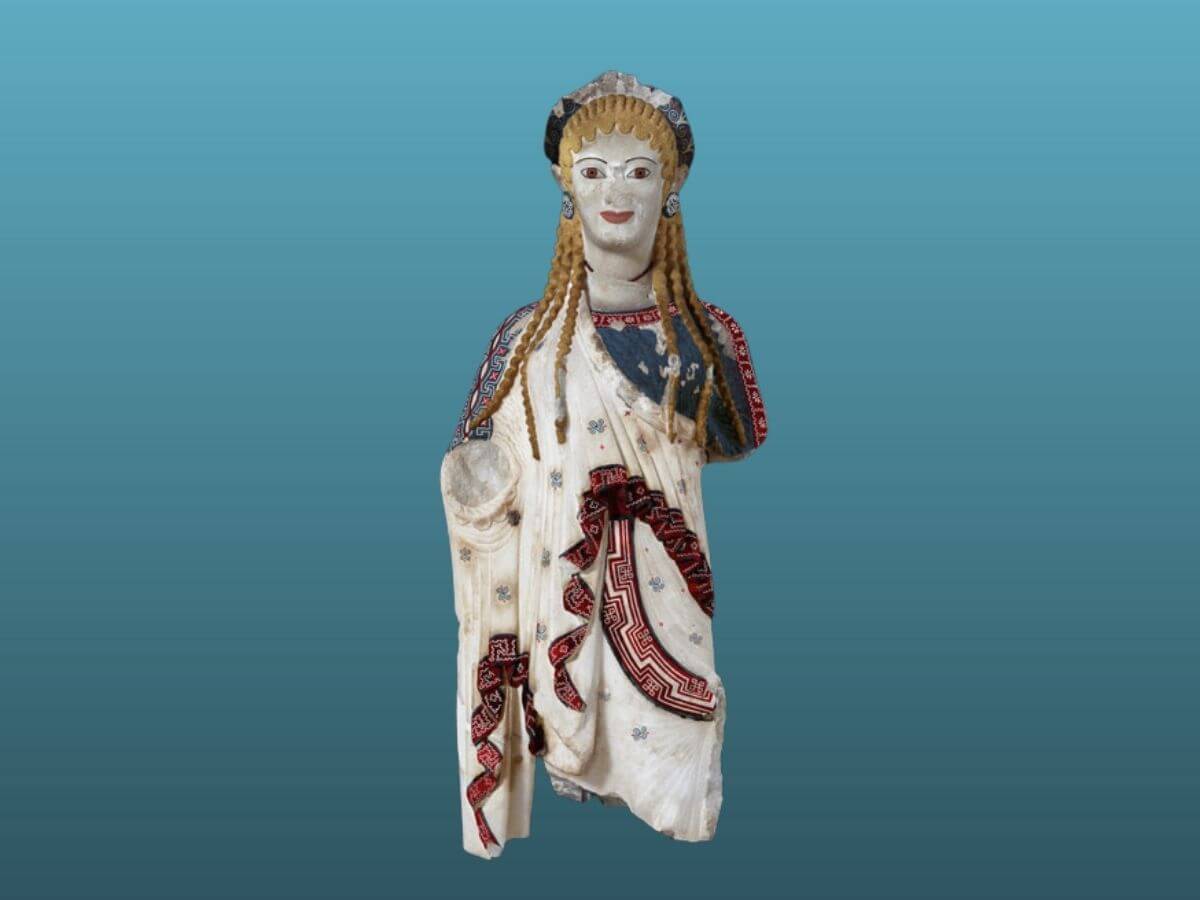 Beauty always derives from the gods, who possess it to the absolute degree. Even the most beautiful mortals are considered equal in beauty to the gods and are never superior to them. Also, each god has his own feature in Greek mythology and is attributed with it to the works of antiquity: Zeus the magnificence, Hera the solemnity, Aphrodite the beauty of the face and body, Athena the wisdom, Ares the vigor, Poseidon the power of nature, Apollo the serenity, Artemis the austerity… 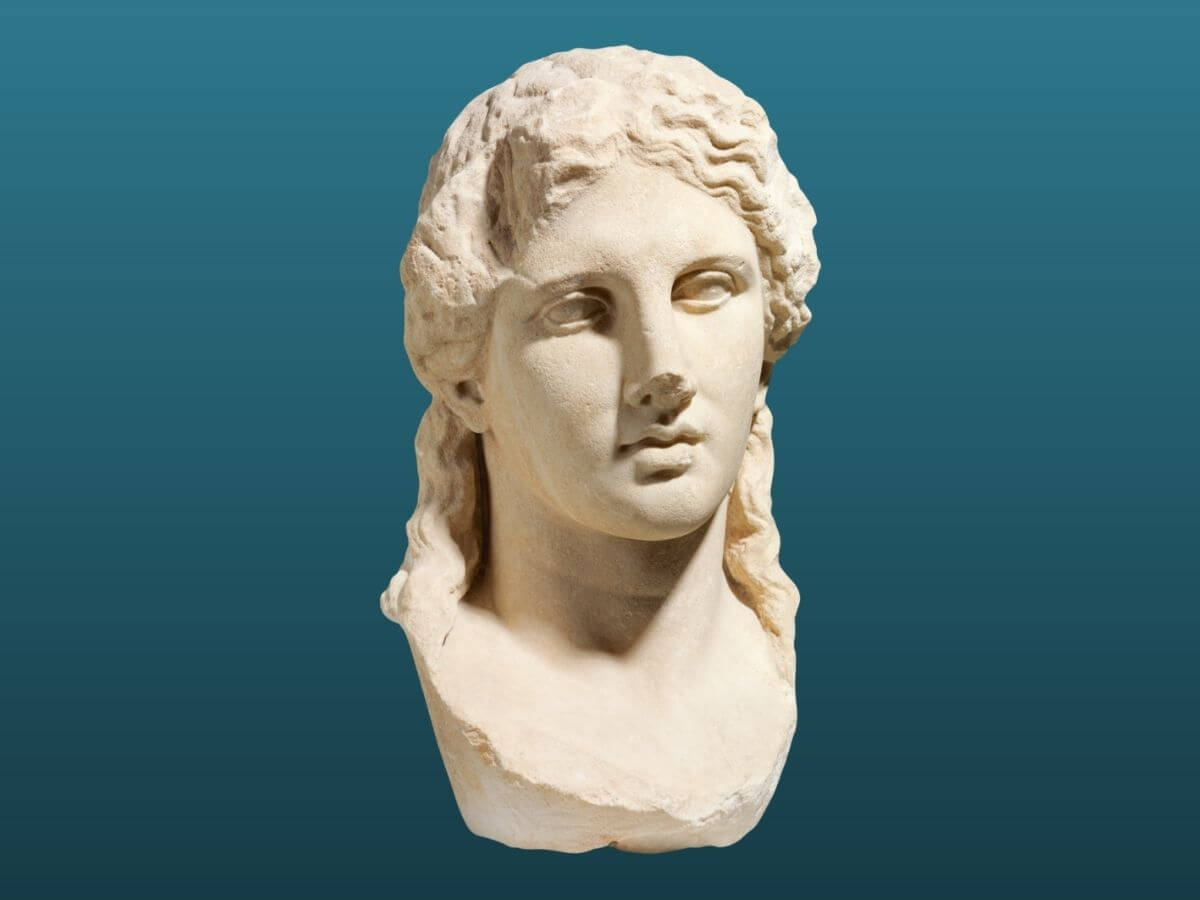 Kallos thrives and declines with age. Beauty withers away and strength gives way to weakness. However, according to ancient Greek thought, the kallos of humans is inherent in every age, and thanks to this, many mortals became immortal. Such examples are mythical and real figures of antiquity, well-known for their natural beauty, like Adonis or Helen of Troy on the one hand, and Alexander the Great on the other.

Xenophon reflects this perception, saying that "we should not underestimate kallos because it disappears quickly. Because as we recognize beauty in a boy, so we do in a teenager, an adult or an elderly person." Similarly, Aristotle, who states that "beauty is different from age to age."

The praise of the natural beauty of young people, men and women of everyday life in ancient Greece by their contemporaries is given through inscriptions engraved on vases or written in color on stone architectural members, etc. 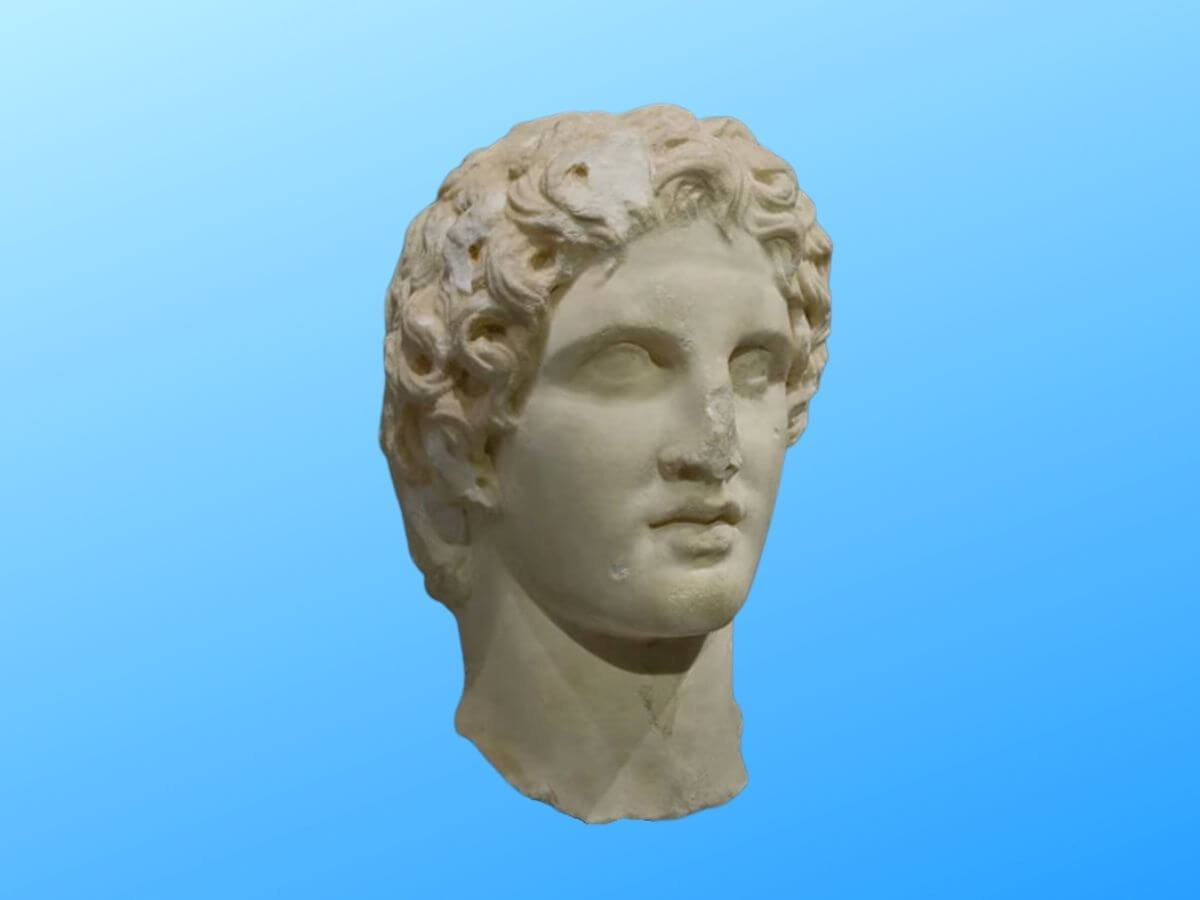 The athletic kallos is about the physical and mental strength and vigor that makes humans capable of coping with the hardships and demands of the competitions, in combination with their noble rivalry and their wonderful achievements in the stadium. 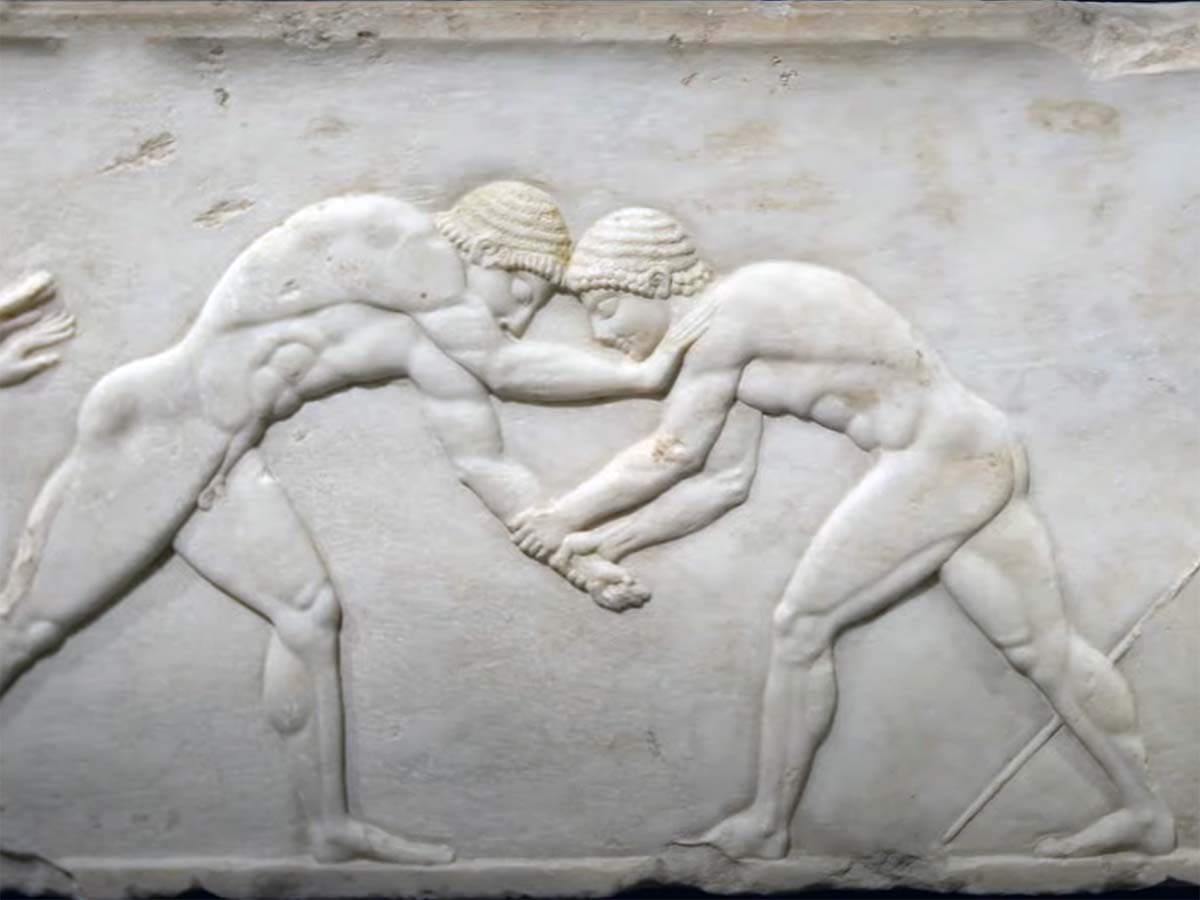 This is about the spirit of self-sacrifice for the sake of the common good, acts of heroism in war and peace, sometimes in combination with natural beauty. The heroes are one level above the common mortals and often become demigods. Such examples are the greatest hero of ancient Greek mythology, Hercules, the hero of Troy, Achilles, but also Atalanta, the famous and beautiful hunter, or the great female warriors, the Amazons. 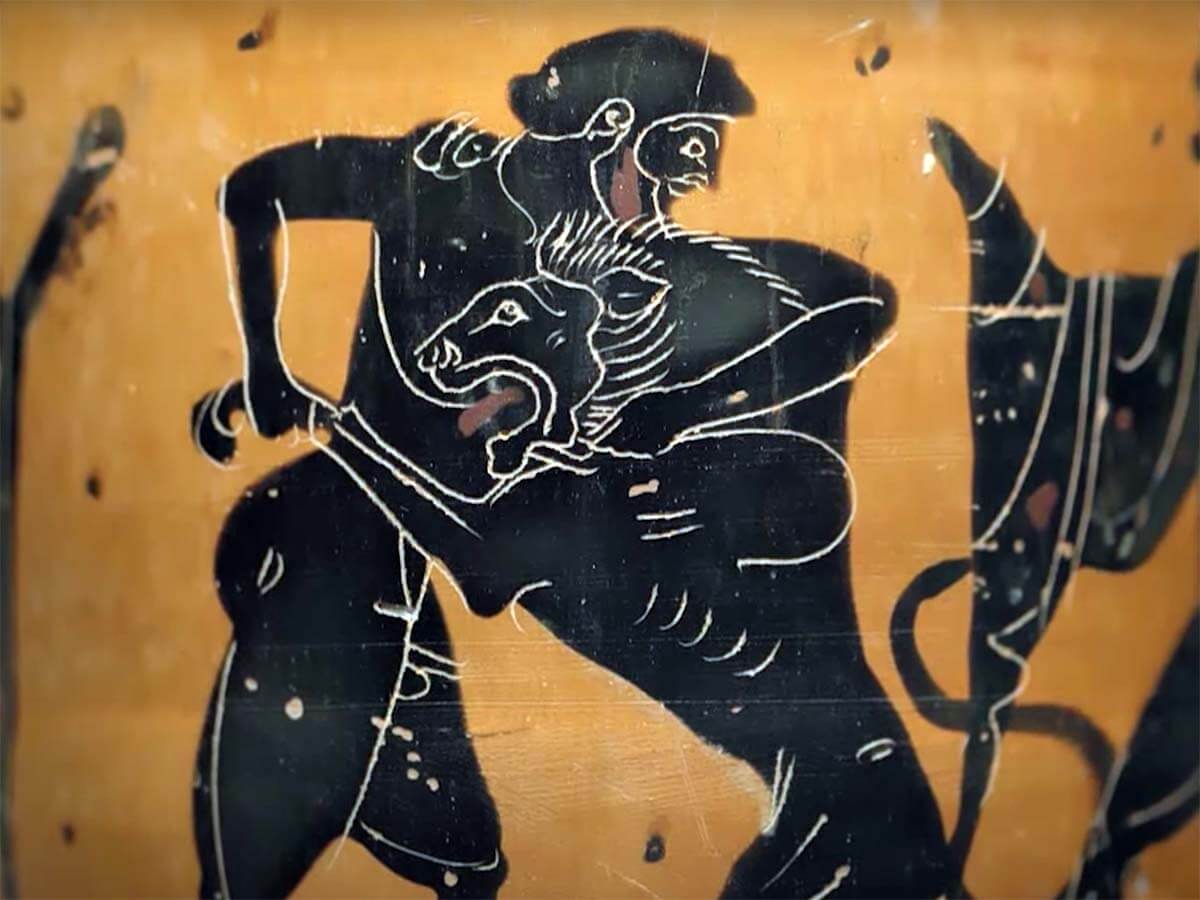 Abductions in Greek Mythology due to kallos

The attraction from the beauty of beautiful mortal people leads gods and heroes to chase them and abduct them, for sexual encounters or to have them as their own forever. There are many references to myths in such cases: Zeus and Ganymede, Theseus and Antiope, etc. 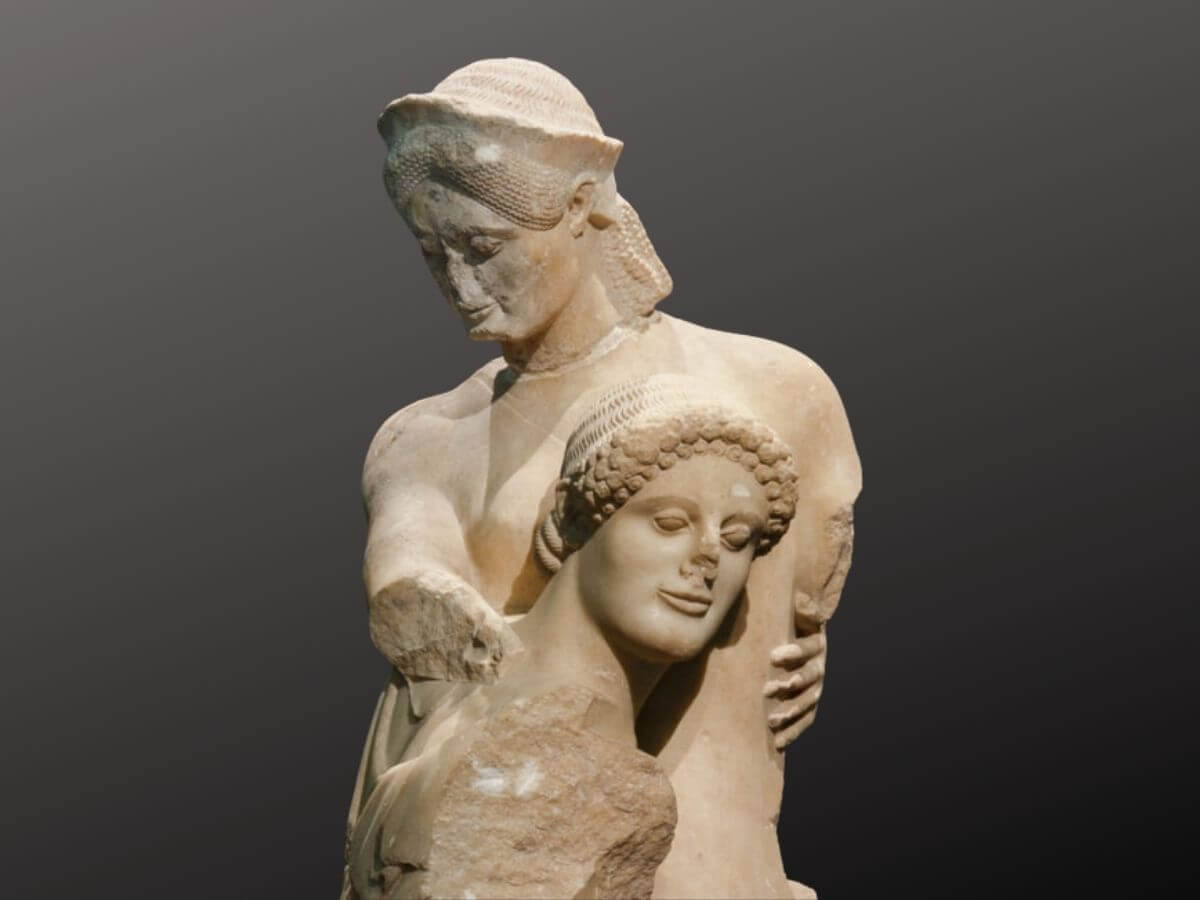 Paris, prince of Troy, is called upon to decide who is the most beautiful goddess and to give her an apple as a reward for her victory (the famous ‘apple of discord’). The competition is won by Aphrodite, the goddess of beauty, who promises Paris to give him the most beautiful mortal woman, Helen, queen of Sparta. This decision laid the foundations for the events that would lead to the Trojan War.

See about: The Apple of Discord and the Fairest of Them All

Featured photo: Marble head of a supernatural statue of Dionysus (from the sanctuary of Dionysus in Thassos island, second half of the 4th c. BC) - Photo credit: Orestis Kourakis / Ephorate of Antiquities of Kavala.

Athens Street Art Guide and Which Neighborhoods to Visit
Women in ancient Greece: The role of women in the Classical Period
Best Time to Visit the Acropolis and Why
The Most Famous Greek Dances (video)
One Day in Hydra: Best Things to Do (Insider Guide)
Travel to Greece from USA: All the Direct Flights to Start Off 2022
Sparta: Things to do and see in the Greek city
A Sightseeing Itinerary for your Holiday to Mykonos
Things to Do in Athens: The ‘must-see’ and the local vibes
Customs in Ancient Greece Associated with September
How Athens got its name: The name-giving myth
Eat Like a Local in Athens: 5 Rules to Follow
The Hills of Athens and the Myths Connected to them
Greek Mythology Monsters: Full list and description
Castles of Peloponnese: Discover Medieval Greece
Greek Mythology Books you need to read (for adults & kids)
Best Places to Eat in Athens - Food Guide (by Locals)
Merry Belly! Authentic Greek Christmas Meal (with recipes)
Hercules: The Life and Labors of the Greek Hero
One day in Athens: How to make the most of it
The Greek Gods: Full List and Background
Athens in October: Reasons to Visit Athens This Month
The Parthenon: 10 Surprising Facts about the Temple
Creating your Dream Vacation with Tailor-made Tours in Greece
Day Trips from Athens - Where the Locals Go
Caryatids: The Daughters of Athens
Monastiraki: Complete Guide and Things to Do
The Buried Rivers of Athens
300: Movie Vs. Reality
Athens Cultural Highlights Off The Beaten Path
Athens City Break For Foodies
6 Greek Myths to Know Before Visiting Athens
10 Landmarks and Monuments You Should Not Miss in Athens
Greece from Home: 10 Ideas for a Virtual Athens Tour
Books on Greek Food and Culture That We Love
The Apple of Discord and the Fairest of Them All
20 Most Famous Greek Mythology Movies
The Panhellenic Games of Ancient Greece
Basic Greek Words to Know Before Traveling to Greece
Interview With a Local: Ancient Greek Rituals and the Alternative Athens
The Delphic Idea
Meet the Olympian Gods
The Great Plague of Athens: Lessons from the Past
Best Walking Tours in Athens, Magical Walking Routes
Private Tours in Athens: The Benefits of Booking in Private
Acropolis Tour: Why a Guided Tour is Necessary
9 Things to Know About Eleusis The European Capital of Culture 2023
Battles of Ancient Greeks That Shaped Western Civilization
The Best Places to Enjoy Vegan Food in Athens
9+1 Unique Things to Do in Athens this Summer for Free
Interview With a Local: Athens Through the Prism of Art
The Role of Greek Mythology in the Creation of Athenian Wonders
Mysteries of Ancient Greece You Didn't Know About
10 Reasons Why You Should Join a Food Tour in Athens
Top 10 Alternative Destinations in Greece
The 10 Best Places to Visit in Greece
10 Sights to Tour in Athens and Bring Greek Mythology to Life
Top 10 Tips to Know Before Traveling to Athens
10 Things to Do in Delphi Home to the Oracle of Apollo
Symposia in Ancient Greece: Reviving the Ancient Custom
30 of the Most Famous Tales from Greek Mythology
Interview with a Local: Greek Neoclassicism and the Unseen Athens
10 Things you didn't Know about Ancient Greeks
48 Hours in Athens: Full Itinerary by Locals - Greek TravelTellers
10+1 Traditional Greek Foods and Drinks to Try when you Visit Greece
10+3 Things to Do in Athens on a Rainy Day
Alternative Things to Do in Athens: Getting Off the Beaten Path in the City of Wonders
Christmas in Athens: Top Things to Do and Know
December in Athens: 4 Reasons why you Should Choose this Month for your Greek Getaway
Interview with a Local: Greek Gastronomy and Athens for Foodies
10+1 Things to Do in Athens to Time Travel to Ancient Greece
How to Travel in Greece Differently: a Guide for Delving Deeper into the Greek Culture