Type to Search
Mysteries of Ancient Greece
You Didn't Know About

Mysteries of Ancient Greece You Didn't Know About

It is well-known that the Ancient Greeks were great inventors and even greater storytellers. They bequeathed to us important values, great knowledge and wonderful myths. However, there is still a part of their heritage that we do not understand, either because we do not have enough evidence or because we were not intended to be in their secrets. From the cryptic "Epsilon" of Delphi to the mystic triangles and the spacetime portals, there are some mysteries of Ancient Greece that still remain unsolved. Let’s have a look at three of the greatest mysteries and try to unlock them.

Τhe Delphic E or, as it is also known, the "Delphic Epsilon", is nowadays a very misunderstood symbol that some want to identify with secret groups and conspiracy theories. On the contrary, the Delphic Epsilon, that is, the symbol that was placed (according to ancient texts and findings) at the top of the pediment of the Temple of Apollo at Delphi, had for the ancient world its own important value and philosophy. So what was it and what did the Delphic Epsilon really mean? 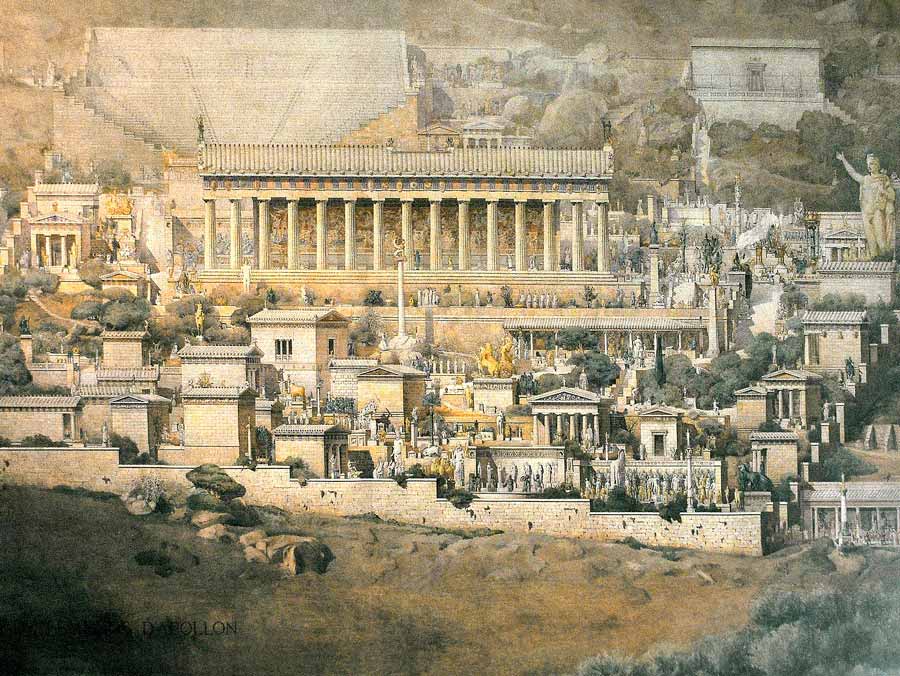 According to the most popular theory, the Epsilon letter as a symbol is directly related to the Delphic Solar Mysticism, the initiation of the man into the light. Its placement on the pediment of the Delphic Temple of Apollo (God of Light - Solar worship) indicates the man’s eternal relationship with the light, thus, perfection. The letter E has three parallel lines marking the union of body, mind and soul, highlighting the trinity of human nature. The letter is the fifth number of the Greek alphabet, with the number five symbolizing the five elements needed for life, according to the Ancients: Earth, Air, Water, Fire and Aether. 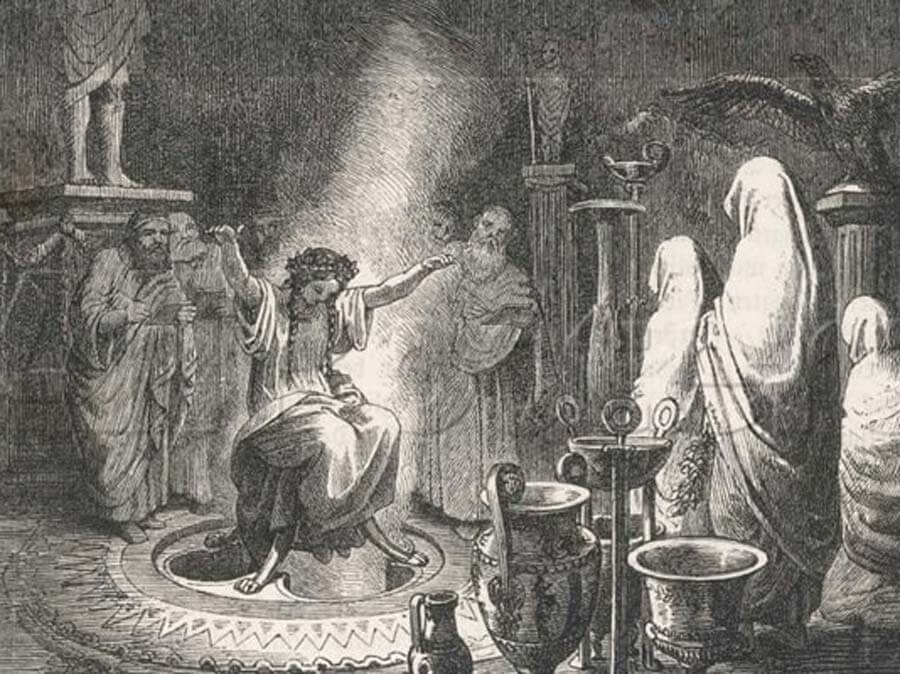 The Delphic Epsilon was placed at the top of the pediment of the Temple of Apollo, right at its center. At the lower-left corner, there was the inscription “Γνώθι Σαυτόν", meaning “know thyself” in Greek, while at the lower-right corner, there was the inscription “Μηδέν Άγαν”, meaning “nothing in excess”. These are known as the “Delphic Commandments” and E was ‘presiding’ over them.

There were three letters of E in total: the oldest one was made of wood and is referred to as “the E of the Wise Men” because it was dedicated by either Solon (one of the seven Wise Men of Ancient Greece) or by all the Wise Men. The second E was bronze and it was commissioned by the Athenians. The third E is known as “the Golden E” since it was made of pure gold, dedicated to God Apollo by Livia Drusilla, the wife of the Roman Emperor Augustus. 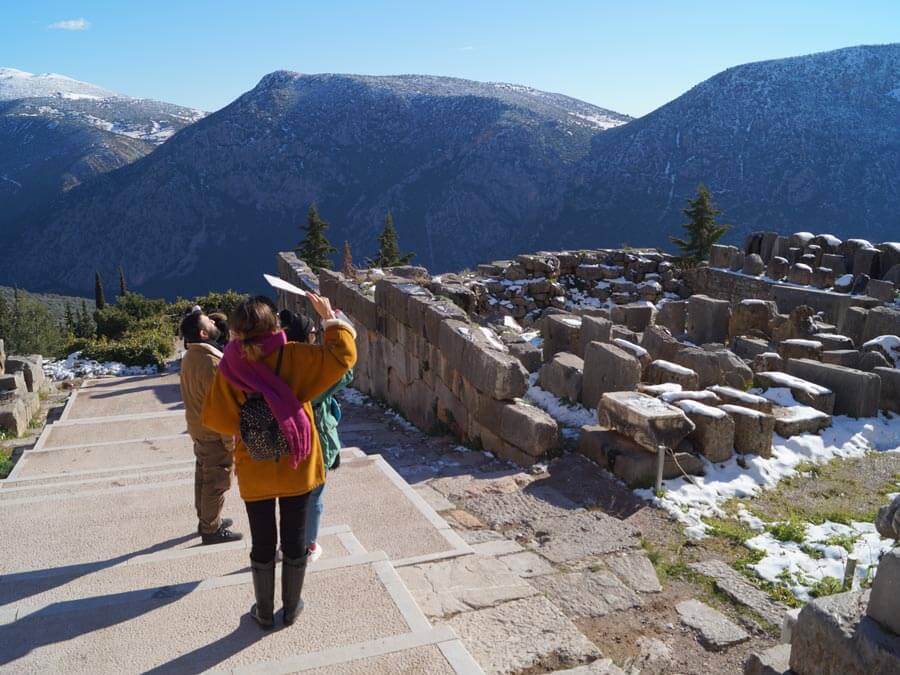 The fact that a letter of the alphabet is causing so much debate and inspires so many theories shows the great importance of that letter in antiquity. The fact that no one wrote about it, but also the way Plutarch himself (a priest of Apollo at Delphi) talks about it, indicates that it must have been key to the Delphic Mysteries. The main reason we do not have more information about this mystery is probably because it was considered a moral and criminal offense to share secrets of the mysteries to the uninitiated, an offense that was punishable by death! So, we will continue looking and our imagination will keep running wild until one day (hopefully) find some proof in our hands. 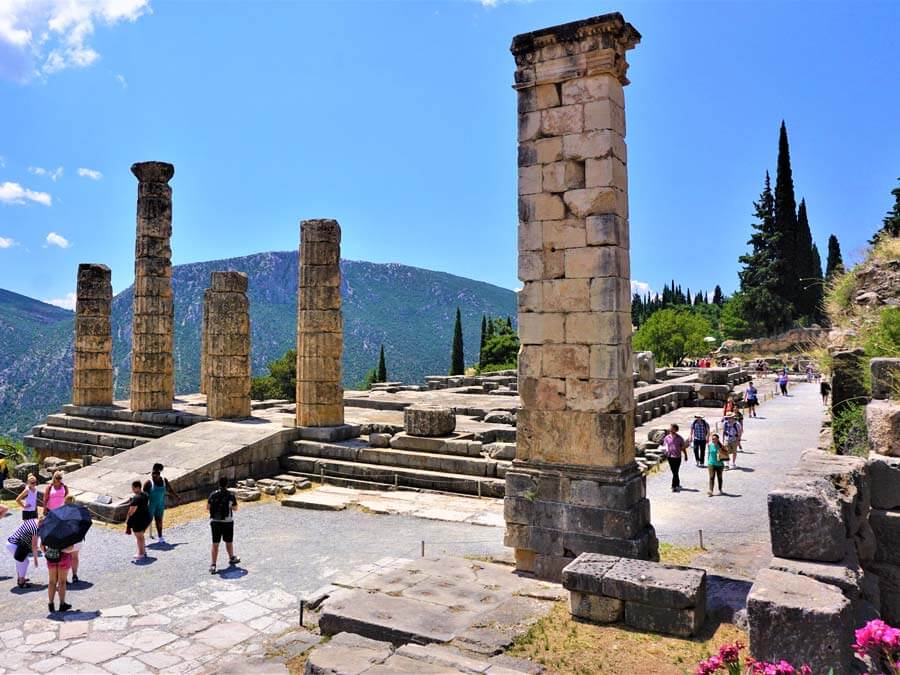 Tip! You can join our private tour of Delphi as a day trip from Athens and try to unlock the mysteries of the Delphic E and the Delphic Commandments at the place that they were created.

The famous Triangle of Ancient Greece is another big mystery regarding our ancestors, as the positioning of their temples forms imaginative geometric formations that defy reasonable interpretations. Why did the Ancient Greeks build their places of worship in such a way as to create equilateral and isosceles triangles on the map? What did this perfect triangle mean to them? And how could they possibly calculate with such precision when the distances were so great and with the sea interfering with them?

Both Aristotle and Strabo admit that the place of the establishment of the sanctuaries was not coincidental but instead followed an internal regulation with its own esoteric methodology, though both appear hesitant to reveal the details of this divine analogy. One theory is that the sites reflect the movements of celestial bodies such as the sun, moon or planets and stars in relation to the Earth’s surface. In other words, the holy places of Ancient Greeks were built in a position to align the inhabited parts of the Earth with the planets in the sky. 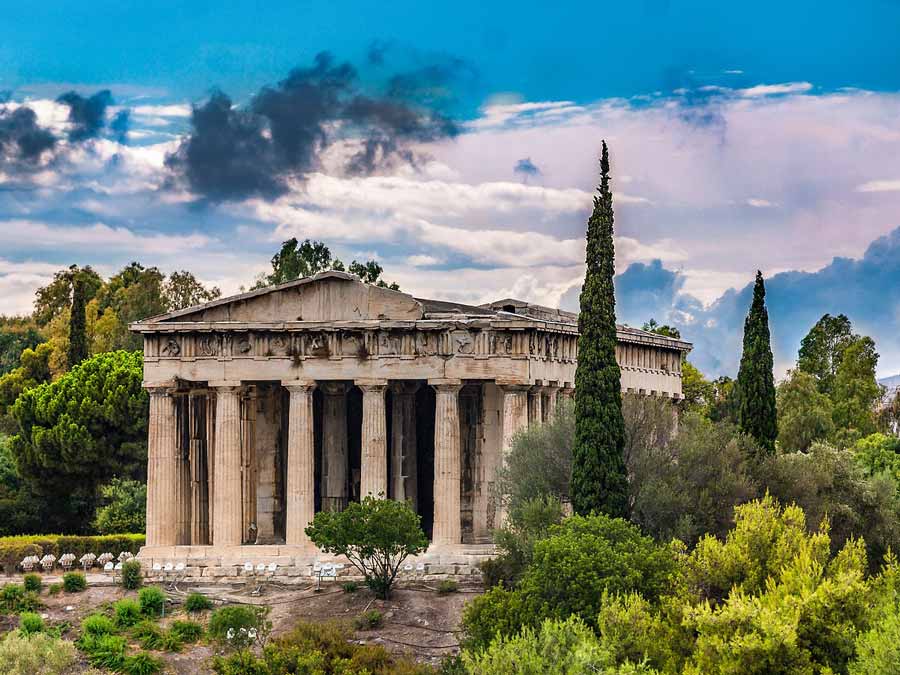 The harmonious relationship of temples, oracles, tombs, and sanctuaries reaches us today only as a picture, a picture of colossal conception which causes us a thrill. However, the well-kept secret stubbornly refuses to reveal itself. What do you think? What secrets lie behind the sacred triangles? 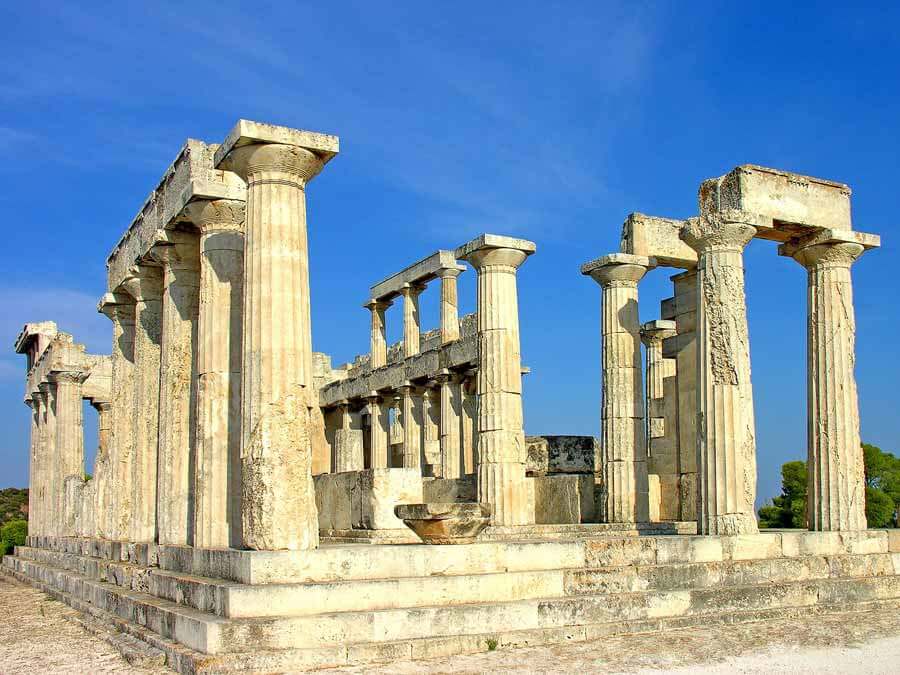 Tip! You can join an Acropolis Mythology tour or a tailor-made tour to all places of the sacred triangles with an expert guide and try to feel if there is special energy or other factors that led to their positioning.

What does Homer have in common with Einstein? They both spoke about gates through time and space. Einstein called them ‘wormholes’. Homer, writes in his work Iliad: “At once, Hera whipped up the horses, and Heaven’s Gates of themselves groaned open on their hinges, gates that the Hours guard, the wardens of wide heaven and Olympus, to veil or reveal as they see fit. Through the gates they drove their steady horses […]” (Iliad, Rhapsody E, verses 741-751). We can interpret Homer’s words simply as divine abilities of the Olympian Gods born out of his or the Greeks’ imagination. However, someone could also see it as a reference to real gates, used by the Greeks or other beings of ‘divine’ power. Space gate references can be traced in ancient texts and traditions of other peoples as well. There are reports of "strange visitors" who visited our planet passing through "star gates" and thus, came to be the term "stargate". A figment of their running imagination or real-life testimonies? 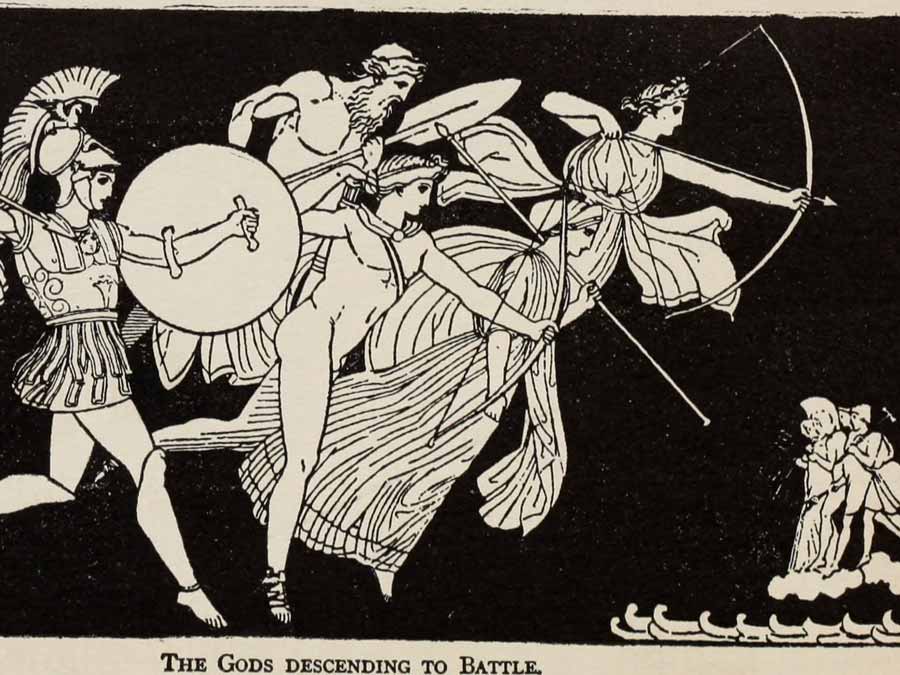 Portara, the imposing, massive marble doorway of Naxos, is the first thing we see from the sea as our boat approaches the port of the island. Some consider it to be the gateway to the Lost Atlantis. Others believe it leads to another dimension. It was clearly part of a great ancient temple, however, it remains a mystery to which god the temple was dedicated to. Some archeologists argue that because of the fact that the great gate, Portara, turns toward Delos, the sacred island of god Apollo, it was a temple dedicated to the god of Light.

Other archeologists claim that it must have been dedicated to Naxos’ patron god, Dionysus. This is where the great hero Theseus arrived after defeating the Minotaur and abducting King Minos’ daughter, Ariadne. God Dionysus set a claim on her and Theseus had to abandon her forever. The island of Naxos is directly connected to the god Dionysus and it is probably here that the Dionysia have been born. But back to the main question: is Portara a stargate and if so, where does it lead? 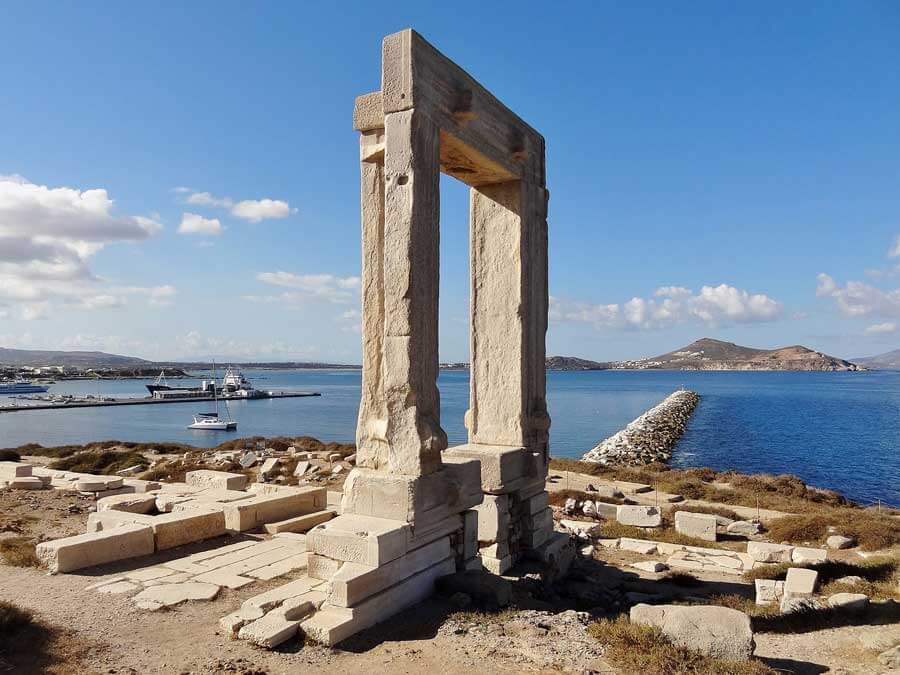 In Hierapolis, in present-day Turkey, one can find the ruins of an Ancient Greek city and the Temple of Apollo (yes, we thought about it too; Apollo seems to be involved in almost every great mystery of Ancient Greece…). In 2013, archeologists unearthed something that the Ancient Greeks described as a “gateway to Hell”. The fascination of the Ancient Greeks for the Underworld, the Kingdom of god Hades (Pluto in Latin), is well-known.

They had a very detailed description of the journey to Hades and how Underworld looked like. Was it an actual place that one could travel through a gate or just a myth? Pluto’s gate in Hierapolis was considered so sacred that only the High Priests were allowed anywhere near it. Could gates like Portara and Ploutonion be portals to another space or time, protected and operated by mysterious priests who possessed knowledge and technology far superior to our own today? Or was it all just imaginative myths? 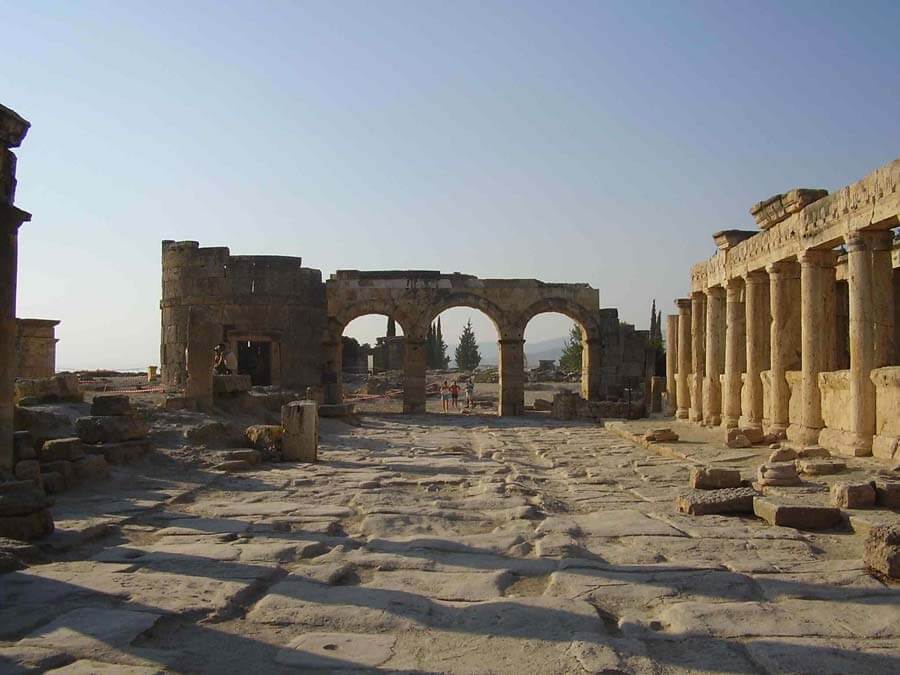 Although the Mysteries of Ancient Greeks are exciting and make our imagination go wild, there are parts of their everyday life that are pretty awesome as well.

Women in ancient Greece: The role of women in the Classical Period
Best Time to Visit the Acropolis and Why
The Most Famous Greek Dances (video)
One Day in Hydra: Best Things to Do (Insider Guide)
Kallos: The Ancient Greek Ideal for Beauty
Sparta: Things to do and see in the Greek city
A Sightseeing Itinerary for your Holiday to Mykonos
Things to Do in Athens: The ‘must-see’ and the local vibes
Customs in Ancient Greece Associated with September
How Athens got its name: The name-giving myth
The Hills of Athens and the Myths Connected to them
Greek Mythology Monsters: Full list and description
Castles of Peloponnese: Discover Medieval Greece
Greek Mythology Books you need to read (for adults & kids)
Hercules: The Life and Labors of the Greek Hero
The Greek Gods: Full List and Background
Athens in October: Reasons to Visit Athens This Month
The Parthenon: 10 Surprising Facts about the Temple
Creating your Dream Vacation with Tailor-made Tours in Greece
Day Trips from Athens - Where the Locals Go
Caryatids: The Daughters of Athens
The Buried Rivers of Athens
300: Movie Vs. Reality
6 Greek Myths to Know Before Visiting Athens
10 Landmarks and Monuments You Should Not Miss in Athens
Greece from Home: 10 Ideas for a Virtual Athens Tour
The Apple of Discord and the Fairest of Them All
20 Most Famous Greek Mythology Movies
The Panhellenic Games of Ancient Greece
The Delphic Idea
Meet the Olympian Gods
The Great Plague of Athens: Lessons from the Past
Best Walking Tours in Athens, Magical Walking Routes
Private Tours in Athens: The Benefits of Booking in Private
Acropolis Tour: Why a Guided Tour is Necessary
9 Things to Know About Eleusis The European Capital of Culture 2023
Battles of Ancient Greeks That Shaped Western Civilization
The Role of Greek Mythology in the Creation of Athenian Wonders
Top 10 Alternative Destinations in Greece
The 10 Best Places to Visit in Greece
10 Sights to Tour in Athens and Bring Greek Mythology to Life
Top 10 Tips to Know Before Traveling to Athens
10 Things to Do in Delphi Home to the Oracle of Apollo
Symposia in Ancient Greece: Reviving the Ancient Custom
30 of the Most Famous Tales from Greek Mythology
Interview with a Local: Greek Neoclassicism and the Unseen Athens
10 Things you didn't Know about Ancient Greeks
10+3 Things to Do in Athens on a Rainy Day
10+1 Things to Do in Athens to Time Travel to Ancient Greece
How to Travel in Greece Differently: a Guide for Delving Deeper into the Greek Culture