Type to Search
A Sightseeing Itinerary
for your Holiday to Mykonos

A Sightseeing Itinerary for your Holiday to Mykonos

Owing to the islands’ historical significance, there are breathtaking sights to see around every corner in this part of the world. Voted the second-best island to visit in Europe by Condé Nast Traveler readers, Mykonos is indicative of Greece’s distinguished history, making it a sightseer's paradise.

Little Venice in Mykonos - Photo by Vadim Lu from Pexels

If you are purely on a sightseeing mission, consider heading to Mykonos outside the peak months of July and August, as the island will be quieter and you’ll be able to explore at your own pace.

Even though Mykonos is one of the most popular and commercialised islands, compared to some of its more sizable neighbours, it is actually a relatively small piece of land. Measuring just 85km², Mykonos is almost 20x smaller than the city of London, meaning you can see all that the island has to offer in a short space of time. Here’s what one day of sightseeing could look like in Mykonos.

Our sightseeing jaunt begins at the Old Port. Formerly the main port on the island, welcoming passenger ferries, the port now operates primarily as a tourist hotspot, offering stunning views out onto the Aegean. If you aren’t satisfied looking on from the sidelines and you want to explore the islands by sea, visit the port’s north quay where small boats offering sightseeing tours of local hotspots are docked.

Visitors to the Old Port are spoiled for choice when it comes to places to eat and drink, with plenty of tavernas and bars located in the vicinity. There is also a small beach located next to the Old Port, but don’t sunbathe for too long – we’ve got a busy itinerary ahead! 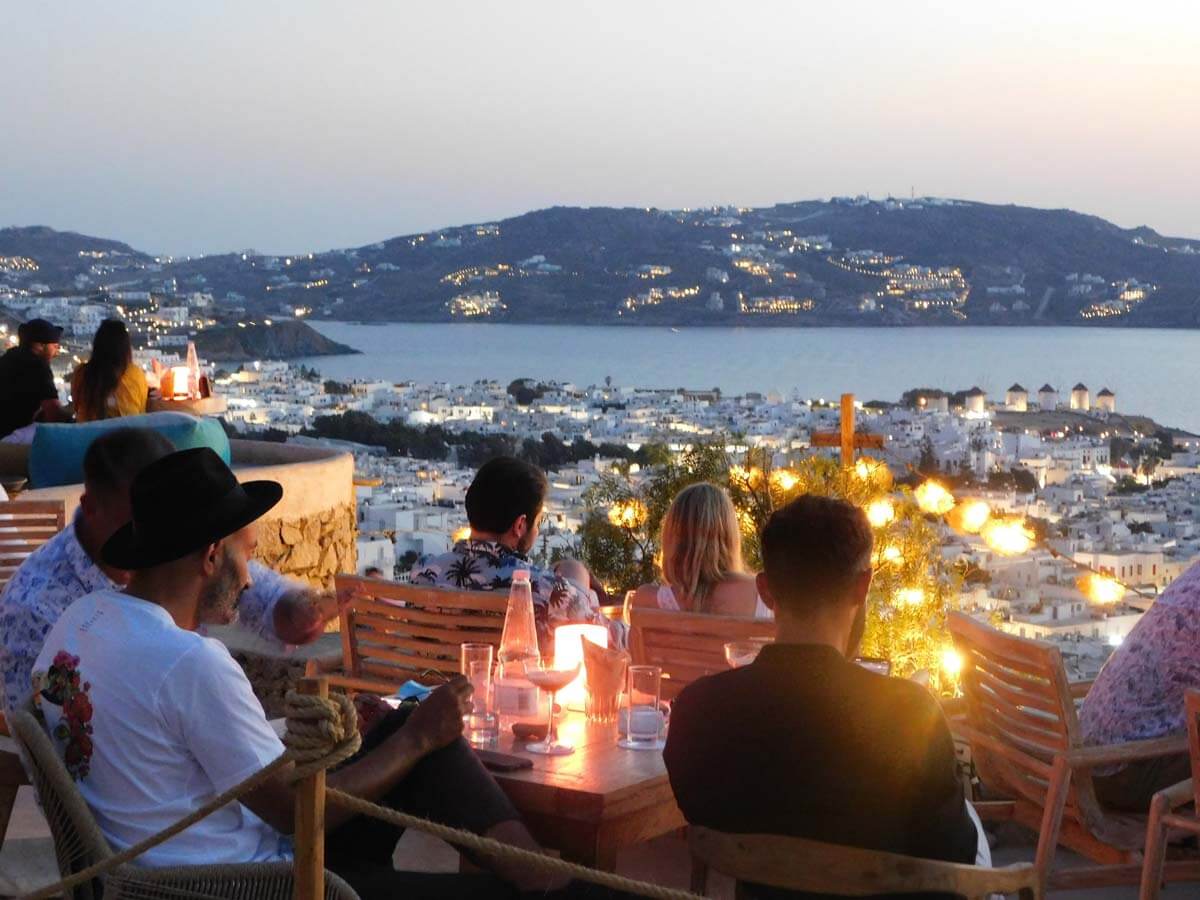 One excursion on offer from the quay is a trip to Delos Island. The short journey from Mykonos to Delos will take no longer than 30 minutes and once there, you will discover a treasure trove of ancient monuments. First inhabited in the 3rd millennium BC, Delos has a rich history, and it is easy to imagine the range of archaeological findings that have been uncovered here over the years.

One of the most popular sites to visit is the Avenue of the Lions, overlooking the now dried up Sacred Lake. The original lions were said to have been built around 600BC by the people of Naxos, to both guard the land and honour Apollo, who was reputedly born on the island of Delos. A number of the original statues are now on display at the archaeological museum, and so the ones at the Avenue of Lions are actually replicas. 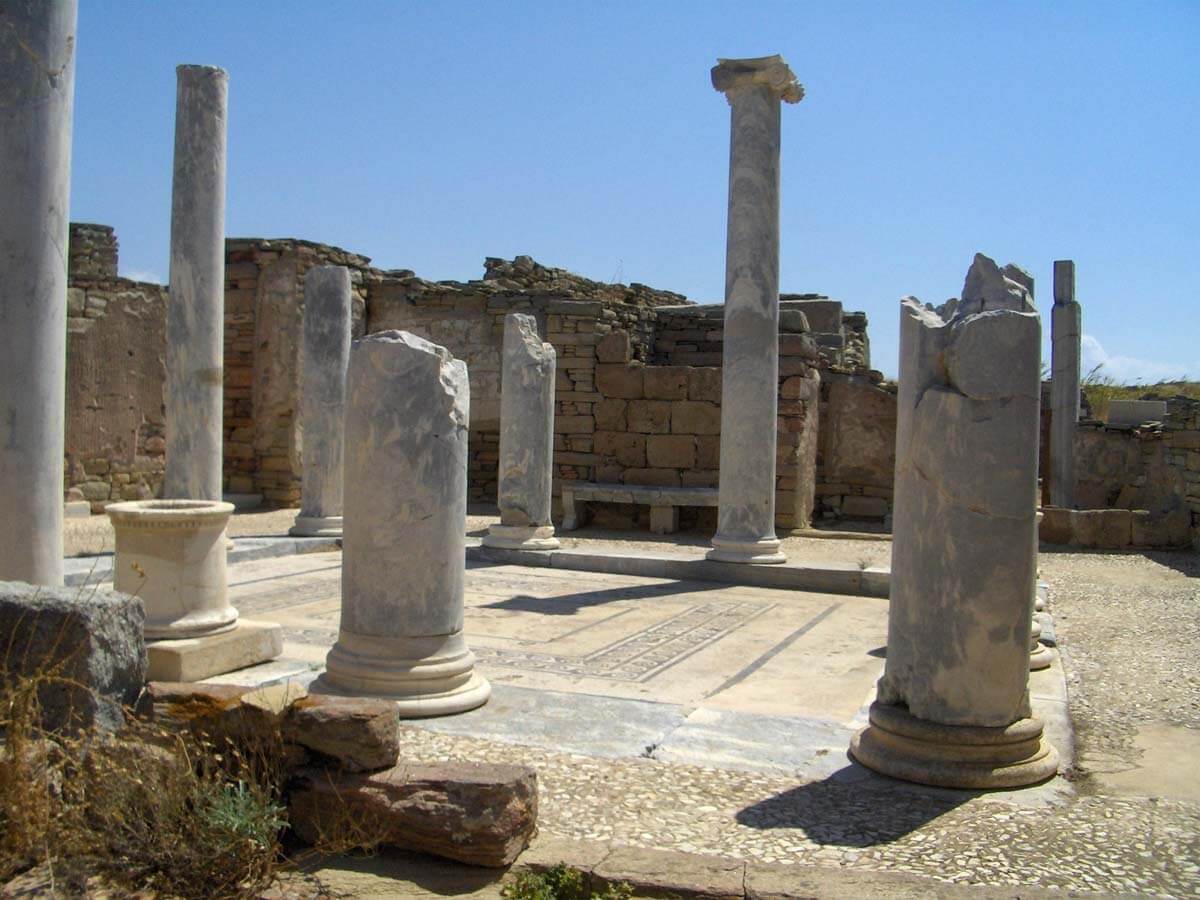 Once you’ve explored all that the Old Port and Delos have to offer, tame your sea legs with a 15-minute walk along the western coast to the stunning neighborhood of Little Venice. Mimicking its authentic Italian counterpart, Mykonos’ Little Venice features rows of houses lurching precariously over water, and it is truly one of the most romantic areas in the Greek Islands.

Whilst it’s one of the most charming and enchanting towns in the area, do not be deceived – Little Venice is also home to some of Mykonos’ liveliest haunts. Bars and discotheques sit alongside the quaint art galleries and old-fashioned buildings for which this area is famed. 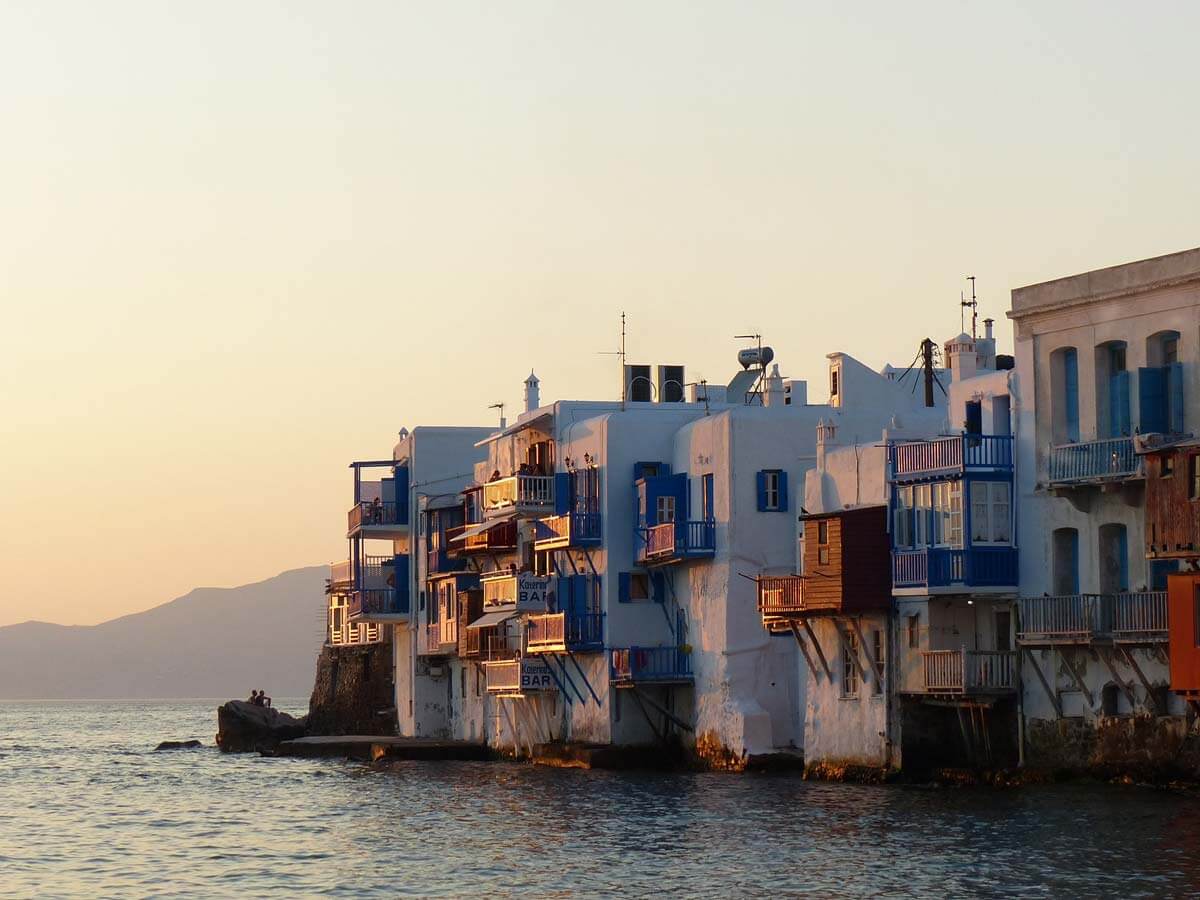 After soaking up the entrancing atmosphere of Little Venice, take a short walk along the coast to the famous Mykonos windmills. Perched up on a hill behind the main town, the windmills can surely be found in more holiday photos than any other site on the island. To get the most striking photograph, hang around the town until sunset. As the sun dips into the Aegean sea, onlookers are blessed with stunning panoramic views, with a better sunset scarcely seen anywhere on the islands. 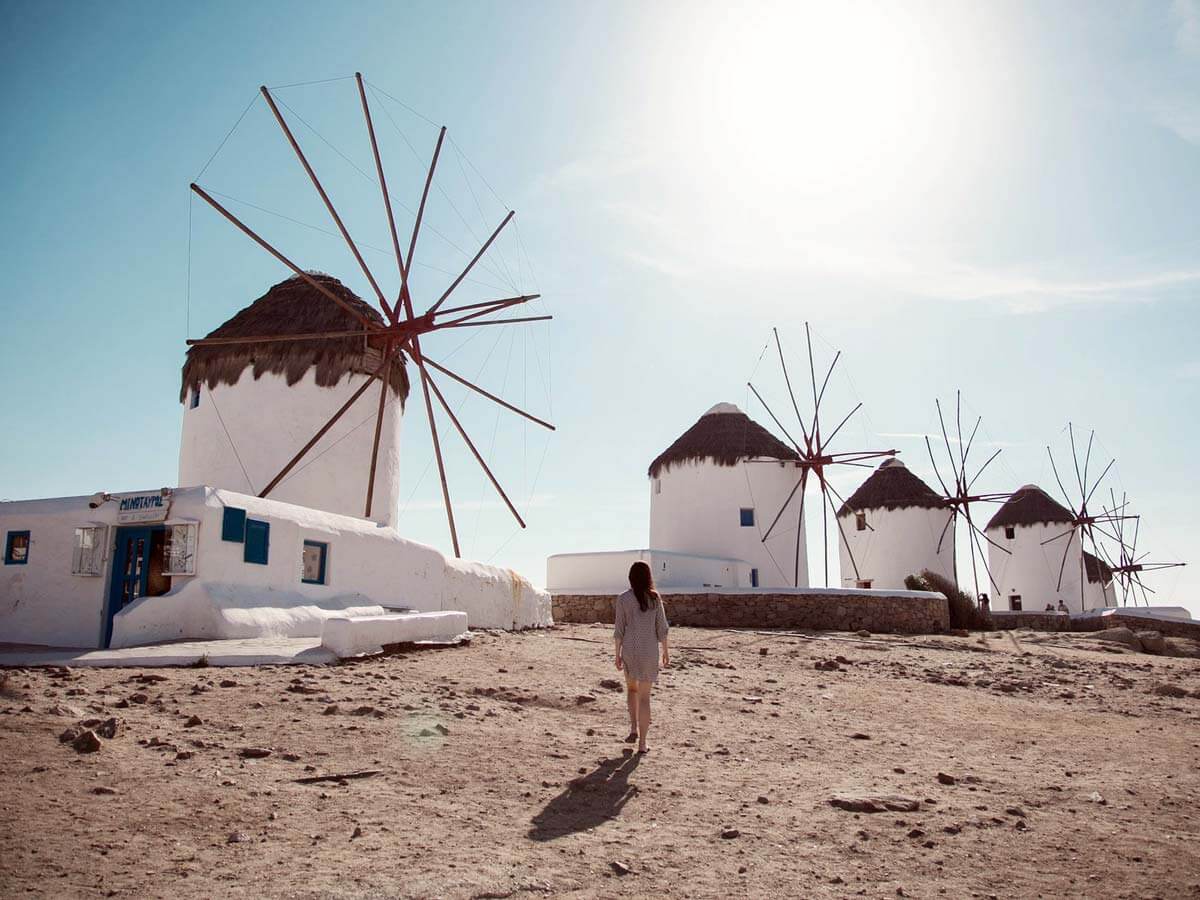 Heading to the islands is definitely a top priority for most travelers to Greece. However, make sure to spend at least 2 nights in Athens as well. Contact us to craft a tailor-made itinerary based on your timetable and interests. Also, don’t miss our articles for tips and things to do in Athens.

Athens Street Art Guide and Which Neighborhoods to Visit
Women in ancient Greece: The role of women in the Classical Period
Best Time to Visit the Acropolis and Why
The Most Famous Greek Dances (video)
One Day in Hydra: Best Things to Do (Insider Guide)
Travel to Greece from USA: All the Direct Flights to Start Off 2022
Kallos: The Ancient Greek Ideal for Beauty
Sparta: Things to do and see in the Greek city
Things to Do in Athens: The ‘must-see’ and the local vibes
Customs in Ancient Greece Associated with September
How Athens got its name: The name-giving myth
Eat Like a Local in Athens: 5 Rules to Follow
The Hills of Athens and the Myths Connected to them
Castles of Peloponnese: Discover Medieval Greece
Greek Mythology Books you need to read (for adults & kids)
Best Places to Eat in Athens - Food Guide (by Locals)
Merry Belly! Authentic Greek Christmas Meal (with recipes)
One day in Athens: How to make the most of it
The Greek Gods: Full List and Background
Athens in October: Reasons to Visit Athens This Month
The Parthenon: 10 Surprising Facts about the Temple
Creating your Dream Vacation with Tailor-made Tours in Greece
Day Trips from Athens - Where the Locals Go
Caryatids: The Daughters of Athens
Monastiraki: Complete Guide and Things to Do
The Buried Rivers of Athens
300: Movie Vs. Reality
Athens Cultural Highlights Off The Beaten Path
Athens City Break For Foodies
6 Greek Myths to Know Before Visiting Athens
10 Landmarks and Monuments You Should Not Miss in Athens
Greece from Home: 10 Ideas for a Virtual Athens Tour
Books on Greek Food and Culture That We Love
The Apple of Discord and the Fairest of Them All
20 Most Famous Greek Mythology Movies
The Panhellenic Games of Ancient Greece
Basic Greek Words to Know Before Traveling to Greece
Interview With a Local: Ancient Greek Rituals and the Alternative Athens
The Delphic Idea
The Great Plague of Athens: Lessons from the Past
Best Walking Tours in Athens, Magical Walking Routes
Private Tours in Athens: The Benefits of Booking in Private
Acropolis Tour: Why a Guided Tour is Necessary
9 Things to Know About Eleusis The European Capital of Culture 2023
Battles of Ancient Greeks That Shaped Western Civilization
The Best Places to Enjoy Vegan Food in Athens
9+1 Unique Things to Do in Athens this Summer for Free
Interview With a Local: Athens Through the Prism of Art
The Role of Greek Mythology in the Creation of Athenian Wonders
Mysteries of Ancient Greece You Didn't Know About
10 Reasons Why You Should Join a Food Tour in Athens
Athens for Instagrammers: The Top 30 Photo Locations in Athens
Top 10 Alternative Destinations in Greece
The 10 Best Places to Visit in Greece
10 Sights to Tour in Athens and Bring Greek Mythology to Life
Top 10 Tips to Know Before Traveling to Athens
10 Things to Do in Delphi Home to the Oracle of Apollo
Symposia in Ancient Greece: Reviving the Ancient Custom
30 of the Most Famous Tales from Greek Mythology
Interview with a Local: Greek Neoclassicism and the Unseen Athens
10 Things you didn't Know about Ancient Greeks
48 Hours in Athens: Full Itinerary by Locals - Greek TravelTellers
10+1 Traditional Greek Foods and Drinks to Try when you Visit Greece
10+3 Things to Do in Athens on a Rainy Day
Alternative Things to Do in Athens: Getting Off the Beaten Path in the City of Wonders
Christmas in Athens: Top Things to Do and Know
December in Athens: 4 Reasons why you Should Choose this Month for your Greek Getaway
Interview with a Local: Greek Gastronomy and Athens for Foodies
10+1 Things to Do in Athens to Time Travel to Ancient Greece
How to Travel in Greece Differently: a Guide for Delving Deeper into the Greek Culture