Type to Search
Sparta:
Things to do and see in the Greek city

Sparta: Things to do and see in the Greek city

As soon as you arrive in the Greek city of Sparta, you are probably in awe by the fact that you are stepping on the same soil as your heroes. As expected, the modern city is very different than the ancient Greek city-state of Sparta. This difference is even more apparent in Sparta than in other cities of Greece (take Athens for example). The reason is dual; first, ancient Spartans were warriors, not creators of grand buildings and monuments. Secondly, much of what was survived the centuries was destroyed by Michel Fourmont, a French antiquarian and classical scholar. So, discovering the city of Menelaos and Leonidas is not an easy task. This is why we gathered here for you the best things to do in Sparta, with tips!

The citadel of Mystras - Credit: Ronny Siegel [CC BY 3.0]

1. The Archaeological Museum of Sparta

Start your exploration from the Archaeological Museum in the city center. Housed in a beautiful neoclassical building with a garden adorned with statues, it is the first Greek museum built in a provincial town to highlight the antiquities of the area. The Museum opens its doors and encourages visitors to admire rare exhibits from ancient and Roman times. The exhibits include sculptures, architectural members, sections of mosaic floors, ceramics, inscribed columns, figurines and votive clay masks. An exhibit that is definitely worth seeing is the bust of a ‘hoplite’ (a Spartan warrior), known as ‘Leonidas’ from the 5th century B.C. 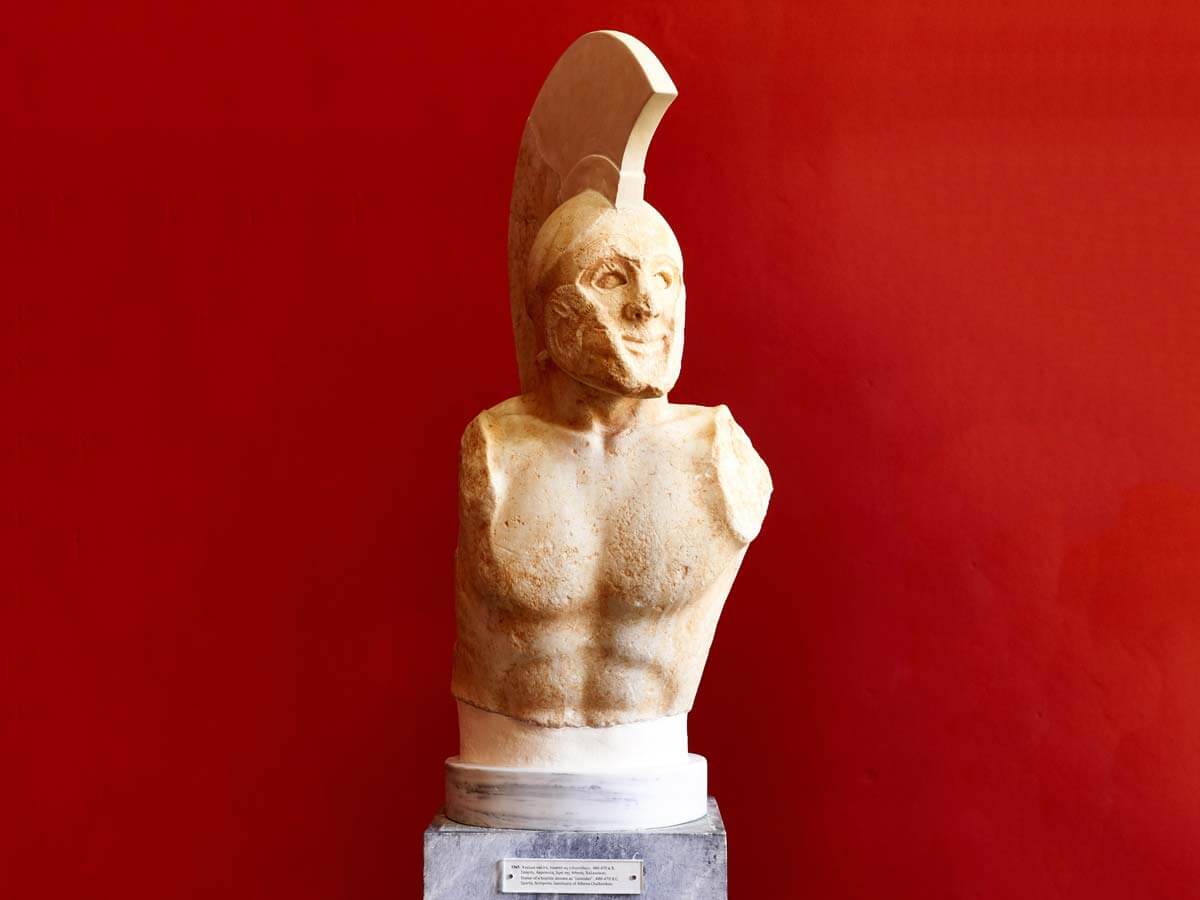 2. The statue of Leonidas

The most famous statue of the brave King may be in Thermopylae, but he could not be absent from his birthplace, could he now! Continuing your walk to the imposing Municipality Building you will find the trademark of Sparta, the statue of Leonidas, which stands haughtily on the most central street of the city. The majestic and impressive statue of the king of Sparta was placed there in 1969 and is probably the most photographed landmark in the city. 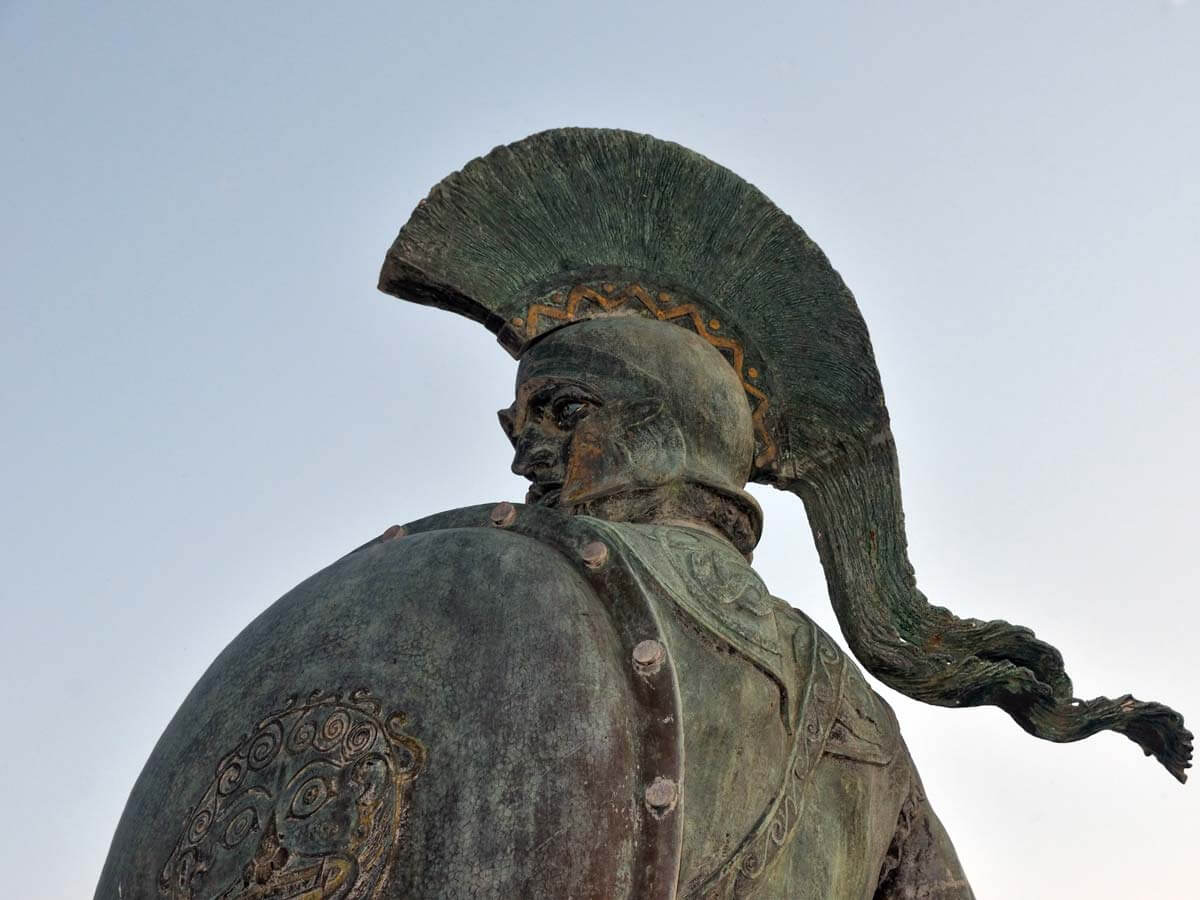 3. The Tomb of Leonidas

When moving north of the city, you will find yourselves admiring the Tomb of Leonidas or "Leonideion", a temple-shaped building of antiquity where according to tradition the bones of the legendary king Leonidas were transported. Although there is no indication of the association of the temple with the legendary king of Sparta, both the local tradition and the traveler Pausanias, express the view that the bones of Leonidas were transported and buried there from Thermopylae. Thus, the monument was identified in the popular consciousness with the tomb of Leonidas. Pausanias also mentions that the tomb was located west of the market, opposite the theater, and that games were held here every year! 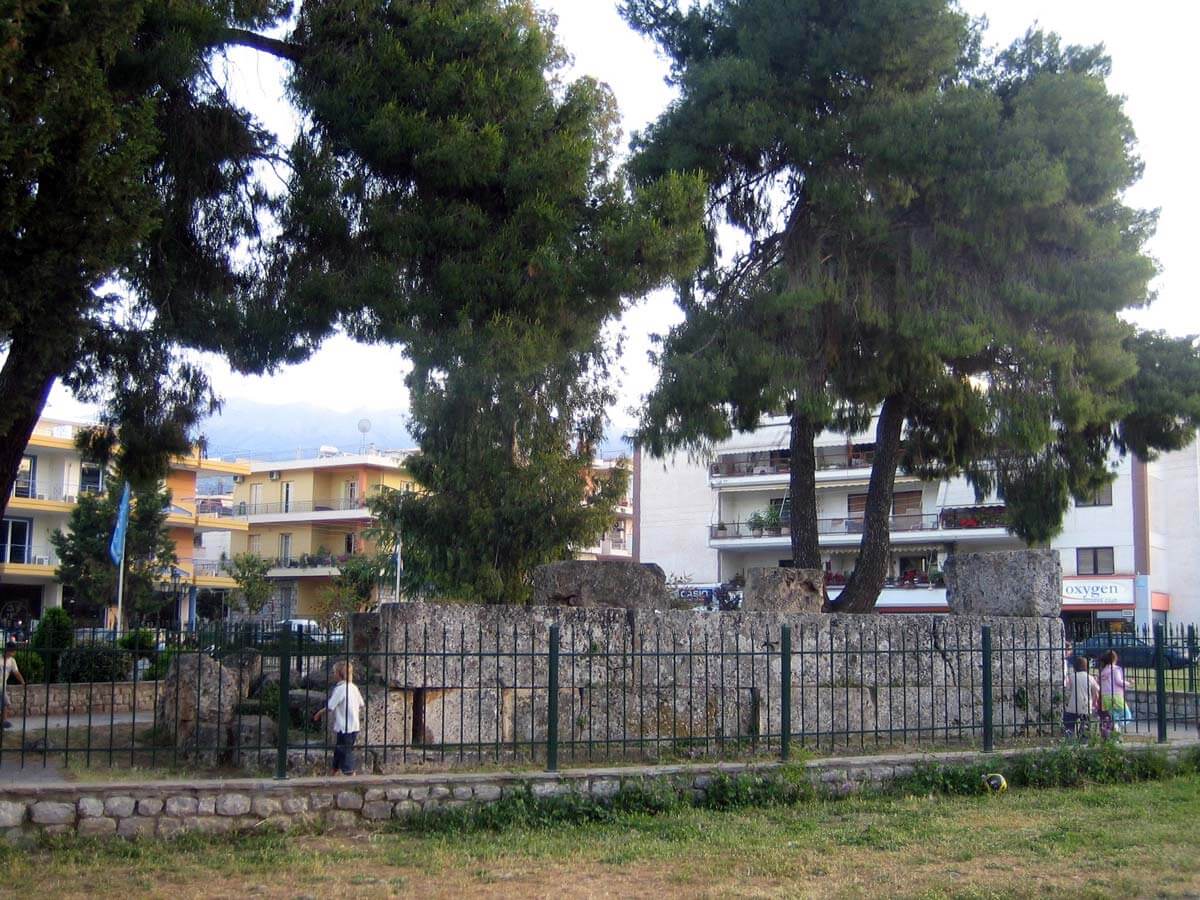 Also noteworthy is the Museum of Olive and Greek Olive Oil, located in the city center which is open all year round. It offers you the opportunity to see the very first testimonies about the presence of the olive tree and the production of olive oil in Greece. For each historical period, you will discover the contribution of the olive and olive oil to the economy and to everyday life: nutrition, body care, but also now outdated uses, such as lighting. You will also see how the olive acquires a symbolic dimension in the mythology, religion, manners and customs of the Greeks. 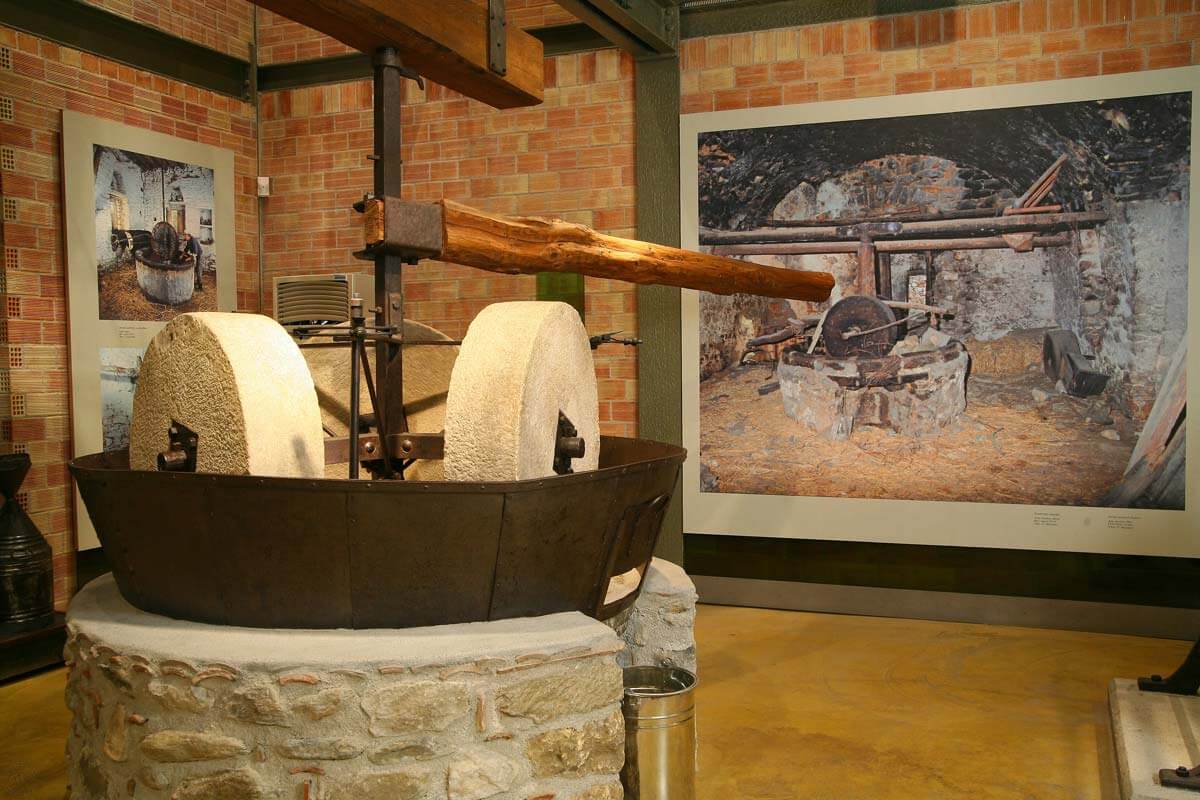 5. The Acropolis of Sparta

The view from the top of the Acropolis is amazing: on one hand is the city of Sparta and on the other the imposing mountain Taygetus. You will find yourself lost in the past admiring the ancient theater, a sight that leaves you with a sense of presence and connection with the ancient Spartan society. Continuing, on the edge of the city, is the Sanctuary of Artemis Orthia, one of the most important sanctuaries of ancient Sparta, which is built near the banks of the river Evrotas. It was the religious center of the famous Spartan education. 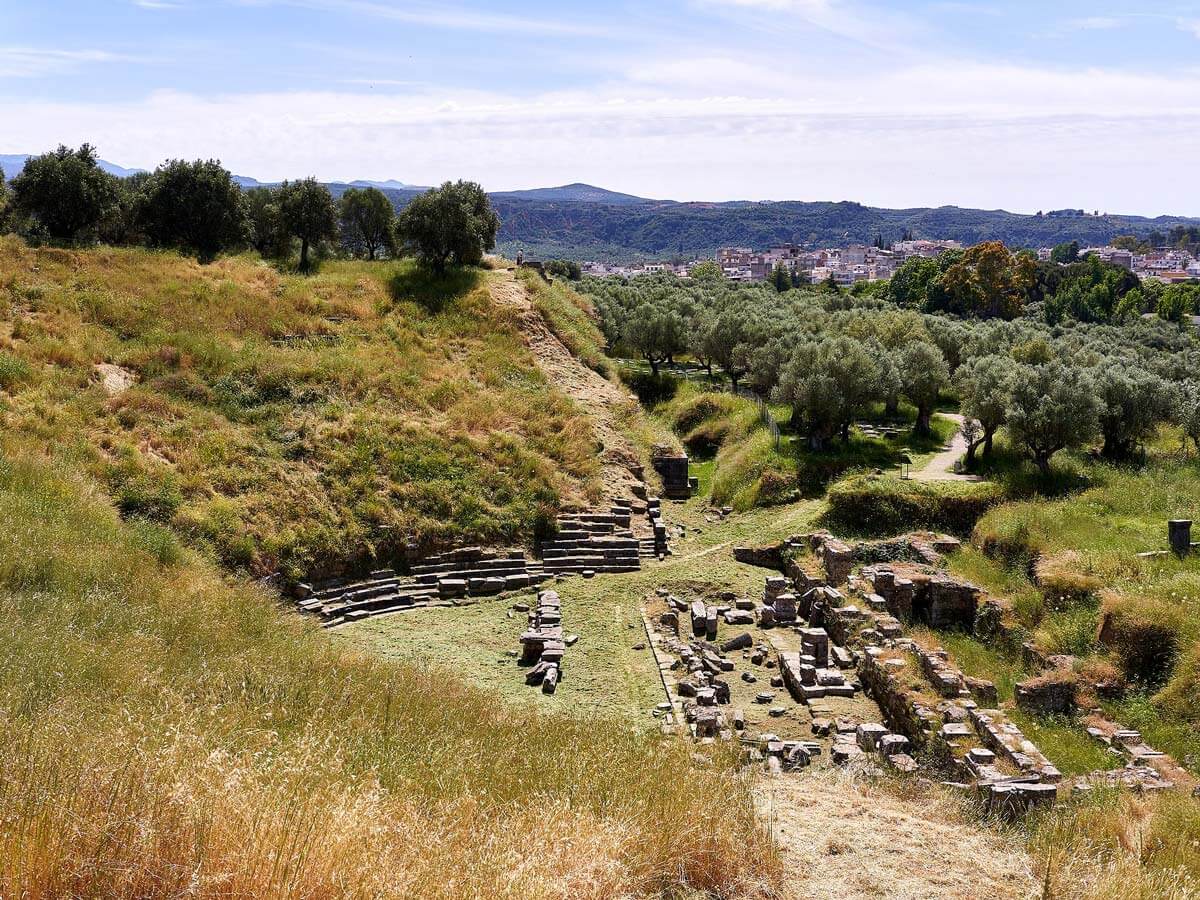 The above suggestions are the top things to do and not to miss in Sparta. But modern Sparta is more than its historical past and to make your experience complete, there are many more things to do and see.

6. The modern city of Sparta

The main square is a meeting point for residents and visitors and should be your starting point as well. In the morning, students and locals take walks, shop in the surrounding shops, drink their coffee or eat their lunch, or go to work, while at night the square has several options for drinks, cocktails and delicious food that will amaze you! Stroll around the alleys of the city and breath in the local vibes of this modern, fast-paced city. 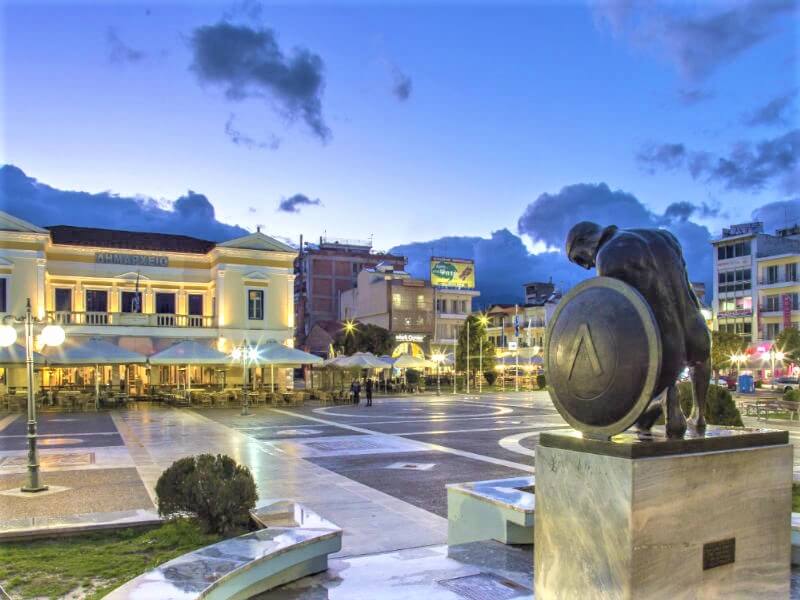 Located just 5km away from Sparta’s city center, you will find Mystras, a UNESCO World Heritage Site. It is a must-visit and among the top things to do and see when visiting Sparta. Mystras, the ‘wonder of the Morea’, was a settlement built like an amphitheater on the hill, forging a fortress. You can enjoy a walk in the ruins of this medieval village, passing through the cobbled alleys with the fragrant gardens, the Byzantine churches, the Roman baths, and the stone fountains. If you visit during Spring, you can attend carnival events, such as the Crokee Carnival, and taste fasting food in the village of Mystras, accompanied by a bonfire and the flying of kites and balloons! From the 26th of August to the 2nd of September, a trade fair takes place in the settlement of Mystras, where visitors can buy traditional products, delicacies and clothes from Greek handicrafts at affordable prices. 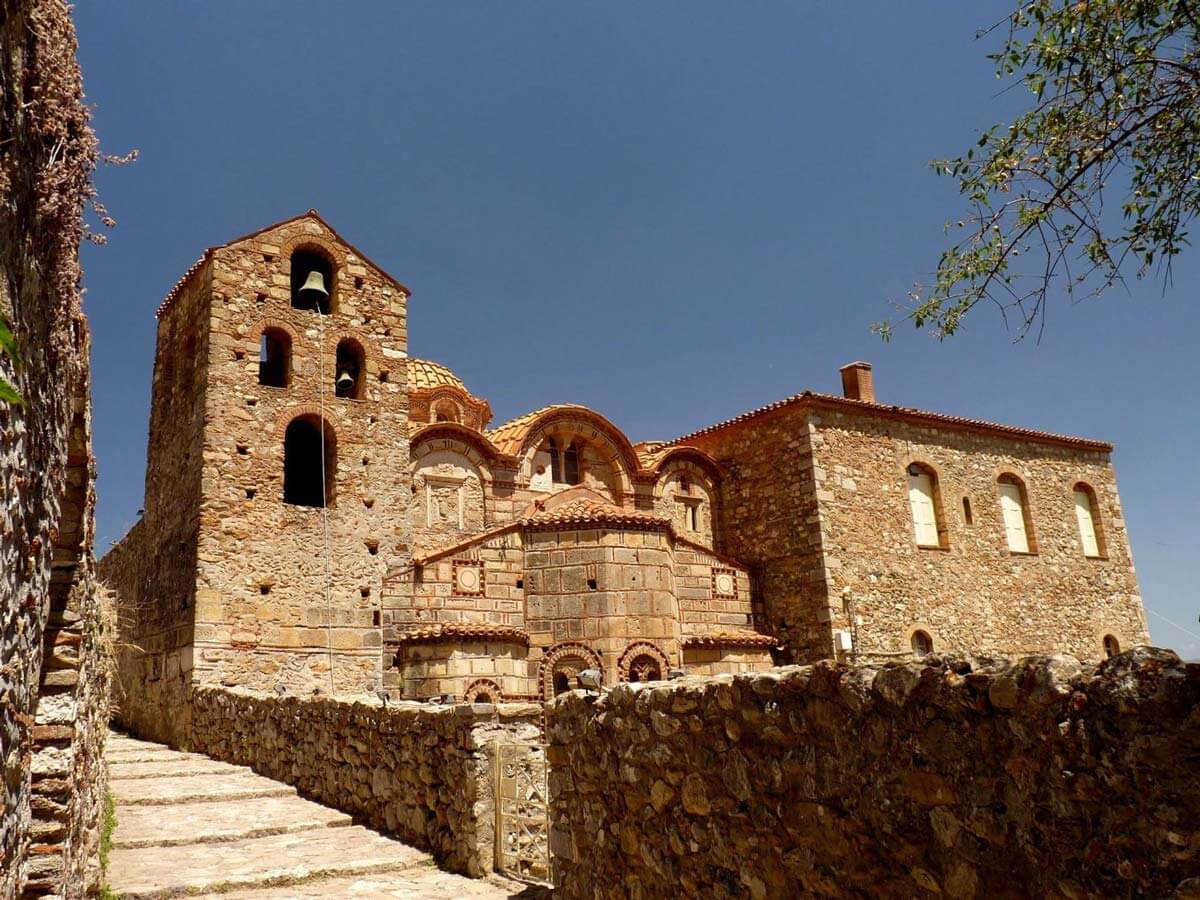 Time to get away from the city and explore the surrounding nature of Sparta and of course the mountain of Taygetus. Walk the idyllic paths of Taygetus, discover villages hidden behind dense forests and try local cuisine in taverns and restaurants. Some of the highlights of the South Taygetus is its fantastic gorge, which is part of the Natura 2000 network, the wonderful villages of Arna, Koumousta and Xirokambi, the only bridge of antiquity that has survived to this day, and the famous Monastery of Gola, with its frescoes of ancient Greek philosophers. North Taygetus is quite uncharted. It consists of the wilder part, with the beautiful valley of Kastora, the homonymous river and its impressive bridge, the villages of Kastori, Pellana, Georgitsi and Loganiko, and the Palace of Menelaus and Helen of Troy. 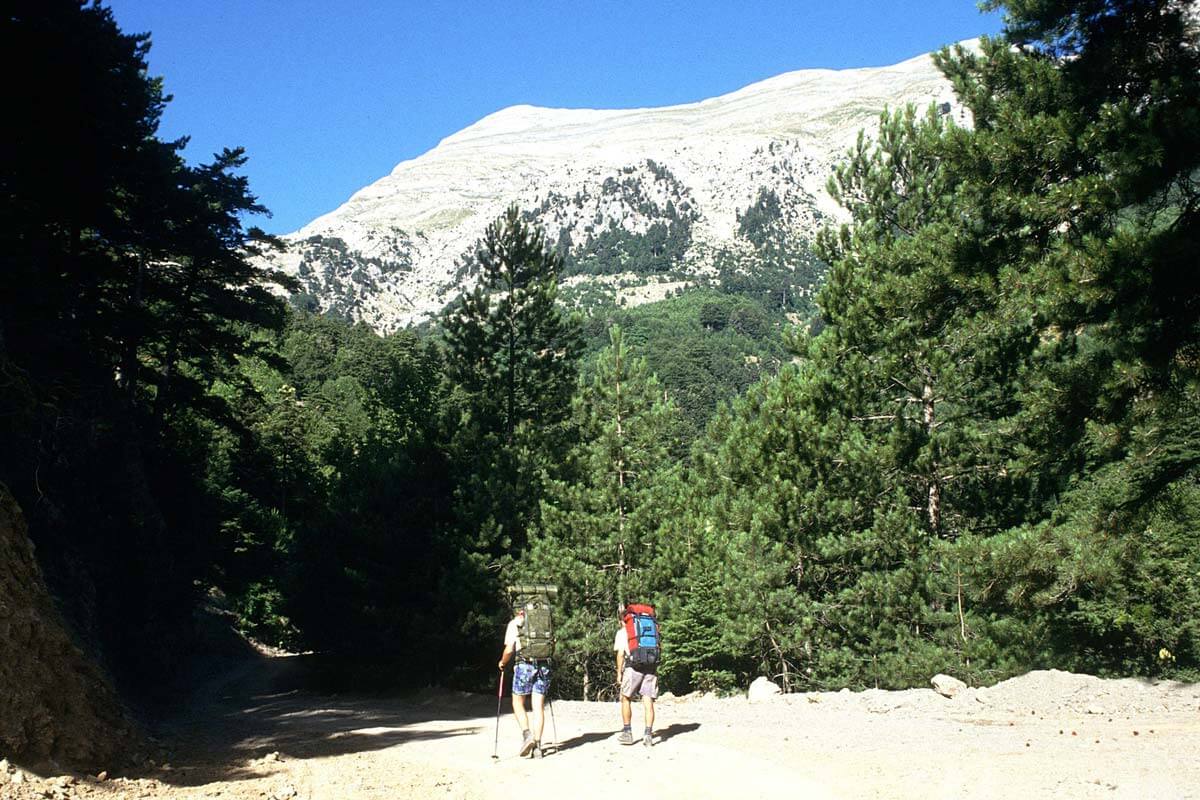 Other tips and things to do in Sparta

For the mountain: Visit the Magganiari Spring and take time to enjoy this little wonder of nature.

For the city: On Saturdays, the public market of the city is a pole of attraction and one of the best sources to buy organic vegetables and herbs from the Taygetus and Parnonas mountains. During summer, the Cultural Summer festival, organized at the Sainopouleio Amphitheater, gives you the opportunity to watch a show, a play, or a concert during your stay in the city. 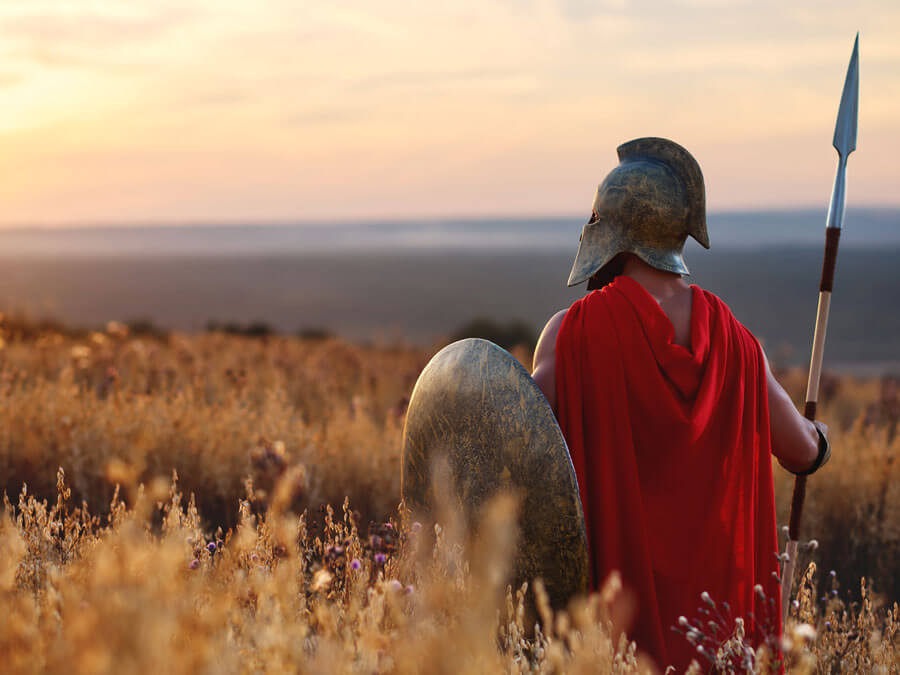 Athens Street Art Guide and Which Neighborhoods to Visit
Women in ancient Greece: The role of women in the Classical Period
Best Time to Visit the Acropolis and Why
The Most Famous Greek Dances (video)
One Day in Hydra: Best Things to Do (Insider Guide)
Travel to Greece from USA: All the Direct Flights to Start Off 2022
Kallos: The Ancient Greek Ideal for Beauty
A Sightseeing Itinerary for your Holiday to Mykonos
Things to Do in Athens: The ‘must-see’ and the local vibes
Customs in Ancient Greece Associated with September
How Athens got its name: The name-giving myth
Eat Like a Local in Athens: 5 Rules to Follow
The Hills of Athens and the Myths Connected to them
Castles of Peloponnese: Discover Medieval Greece
Greek Mythology Books you need to read (for adults & kids)
Best Places to Eat in Athens - Food Guide (by Locals)
Merry Belly! Authentic Greek Christmas Meal (with recipes)
One day in Athens: How to make the most of it
The Greek Gods: Full List and Background
Athens in October: Reasons to Visit Athens This Month
The Parthenon: 10 Surprising Facts about the Temple
Creating your Dream Vacation with Tailor-made Tours in Greece
Day Trips from Athens - Where the Locals Go
Caryatids: The Daughters of Athens
Monastiraki: Complete Guide and Things to Do
The Buried Rivers of Athens
300: Movie Vs. Reality
Athens Cultural Highlights Off The Beaten Path
Athens City Break For Foodies
6 Greek Myths to Know Before Visiting Athens
10 Landmarks and Monuments You Should Not Miss in Athens
Greece from Home: 10 Ideas for a Virtual Athens Tour
Books on Greek Food and Culture That We Love
The Apple of Discord and the Fairest of Them All
20 Most Famous Greek Mythology Movies
The Panhellenic Games of Ancient Greece
Basic Greek Words to Know Before Traveling to Greece
Interview With a Local: Ancient Greek Rituals and the Alternative Athens
The Delphic Idea
The Great Plague of Athens: Lessons from the Past
Best Walking Tours in Athens, Magical Walking Routes
Private Tours in Athens: The Benefits of Booking in Private
Acropolis Tour: Why a Guided Tour is Necessary
9 Things to Know About Eleusis The European Capital of Culture 2023
Battles of Ancient Greeks That Shaped Western Civilization
The Best Places to Enjoy Vegan Food in Athens
9+1 Unique Things to Do in Athens this Summer for Free
Interview With a Local: Athens Through the Prism of Art
The Role of Greek Mythology in the Creation of Athenian Wonders
Mysteries of Ancient Greece You Didn't Know About
10 Reasons Why You Should Join a Food Tour in Athens
Top 10 Alternative Destinations in Greece
The 10 Best Places to Visit in Greece
10 Sights to Tour in Athens and Bring Greek Mythology to Life
Top 10 Tips to Know Before Traveling to Athens
10 Things to Do in Delphi Home to the Oracle of Apollo
Symposia in Ancient Greece: Reviving the Ancient Custom
30 of the Most Famous Tales from Greek Mythology
Interview with a Local: Greek Neoclassicism and the Unseen Athens
10 Things you didn't Know about Ancient Greeks
48 Hours in Athens: Full Itinerary by Locals - Greek TravelTellers
10+1 Traditional Greek Foods and Drinks to Try when you Visit Greece
10+3 Things to Do in Athens on a Rainy Day
Alternative Things to Do in Athens: Getting Off the Beaten Path in the City of Wonders
Christmas in Athens: Top Things to Do and Know
December in Athens: 4 Reasons why you Should Choose this Month for your Greek Getaway
Interview with a Local: Greek Gastronomy and Athens for Foodies
10+1 Things to Do in Athens to Time Travel to Ancient Greece
How to Travel in Greece Differently: a Guide for Delving Deeper into the Greek Culture