Eleusis, although a very small town of Greece, has a rich history and culture to offer to its visitors. Located just 30 minutes away from Athens’ city center, its past and present are interconnected to that of the more glamorous neighborhood. This small town has received the anointing of the European Capital of Culture for 2021! So, what do we really know about Eleusis and the reasons that led to this anointing? Here are the 9 most important things to know about Eleusis, that can better help you understand its history and importance for the European, and not only, culture. 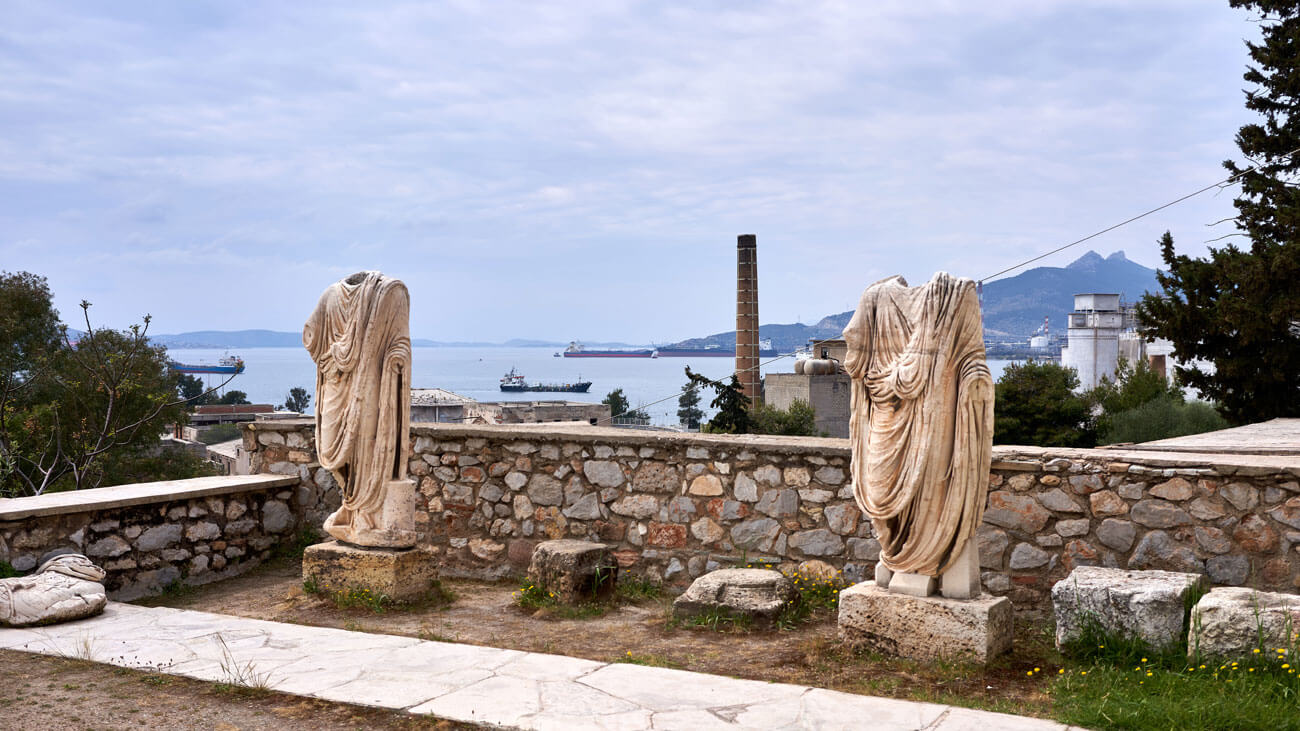 1. Eleusis was home to the Eleusinian Mysteries

The Eleusinian Mysteries were secret religious rites that were taking place in Eleusis. According to the Homeric Hymn to Demeter, they were created by the goddess of harvest and agriculture, Demeter. The myth represents earth's fertility, regeneration and immortality, and constitutes the mythological explanation of the Eleusinian Mysteries’ establishment. Many prominent men were initiated into them; Plato, Pythagoras, Pericles and the Roman Emperor Hadrian are only a few of them. What is so intriguing about the Mysteries is that, even though many thousands of initiates took part in the rituals over so many centuries, no one ever divulged the secrets of what really took place. One reason for this silence is obvious: speaking of the sacred rituals was a crime punishable by death. Today it is still possible to visit the place where the Mysteries would take place, at the archaeological site of Eleusis which also offers a site museum. Joining a guided tour is highly recommended to fully grasp the importance of the Mysteries and what was taking place during the initiation stages. 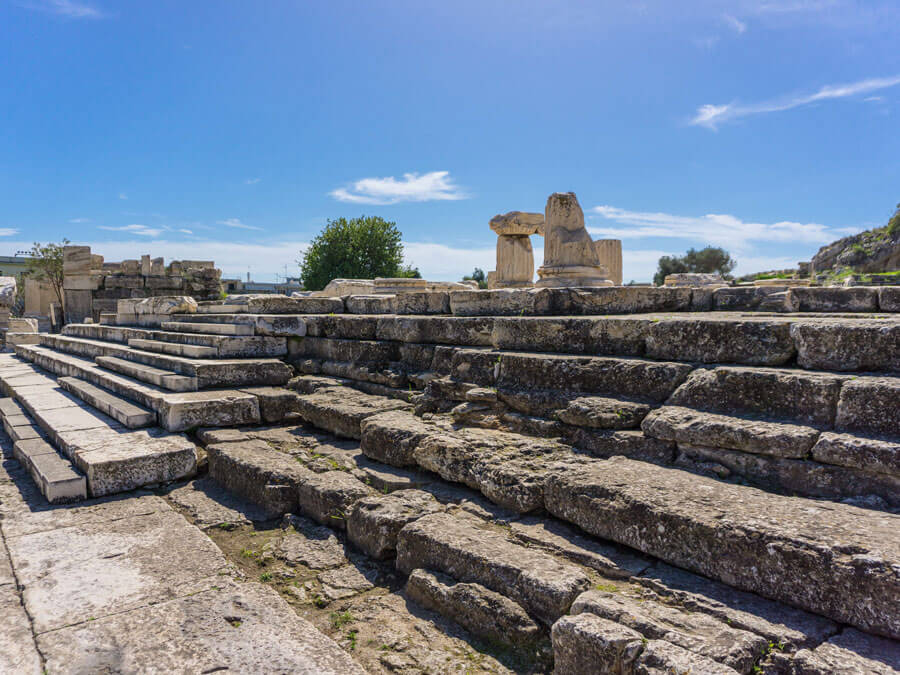 2. Eleusis was one of the five sacred cities of Ancient Greece

In antiquity, Eleusis was one of the five sacred cities of Ancient Greece, along with Athens, Olympia, Delphi, and Delos! The ‘Sacred Way’ that still survives and is being used today, connected Athens with Eleusis. The word ‘Eleusis’ means ‘arrival’ in Greek and comes from the verb ‘eleftho’, meaning ‘come’. In other words, Eleusis was the place of arrival, that would call the pilgrims to come and experience revelation, defeat death. The Mysteries would take place every year and the holy procession would start from Kerameikos site in Athens and though the Sacred Way end in Eleusis, 23km away. 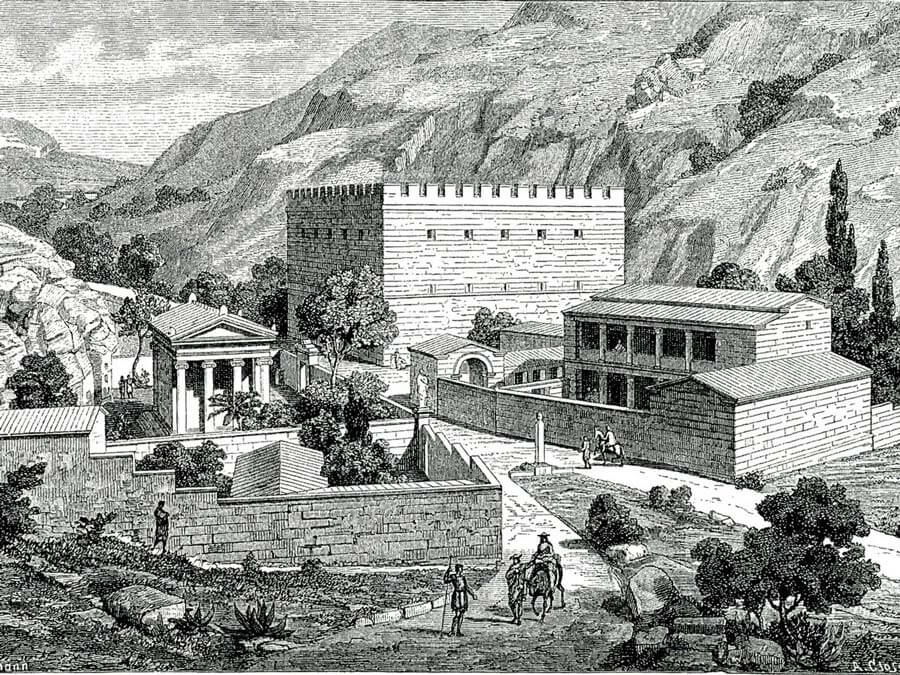 3. Eleusis played an important role in the world politics of antiquity

Because of its key role in the religious and thus, political life, in the ancient world, control of Eleusis was considered vital and was sought after by many great powers. Moreover, its geographical location was of great importance, connecting Peloponnese with Athens. This would lead to the building of many monuments and temples in the city of Eleusis, in an effort to being admired by the travelers. It was in the 5th century BC and under the great Pericles that the holy site of the Eleusinian Mysteries reached their most glamorous state. Iktinos, the great architect of the Parthenon, built a Telestirion (the initiation hall) big enough to hold thousands of people, which was the largest building in Ancient Greece. During the Roman period, Emperor Hadrian also added a triumphal arch. 4. The Aeschylia Festival is taking place in Eleusis

The festival owes its name to the ancient playwright Aeschylus, who was born and raised in this city. The Aeschylia Festival is one of the most influential and long-running festivals in Greek territory, honored with European distinction as one of the best Festivals in Europe! Every summer it includes theatrical, musical and cinematic events. It is taking place in an abandoned industrial site, at the Old Oil Mill. 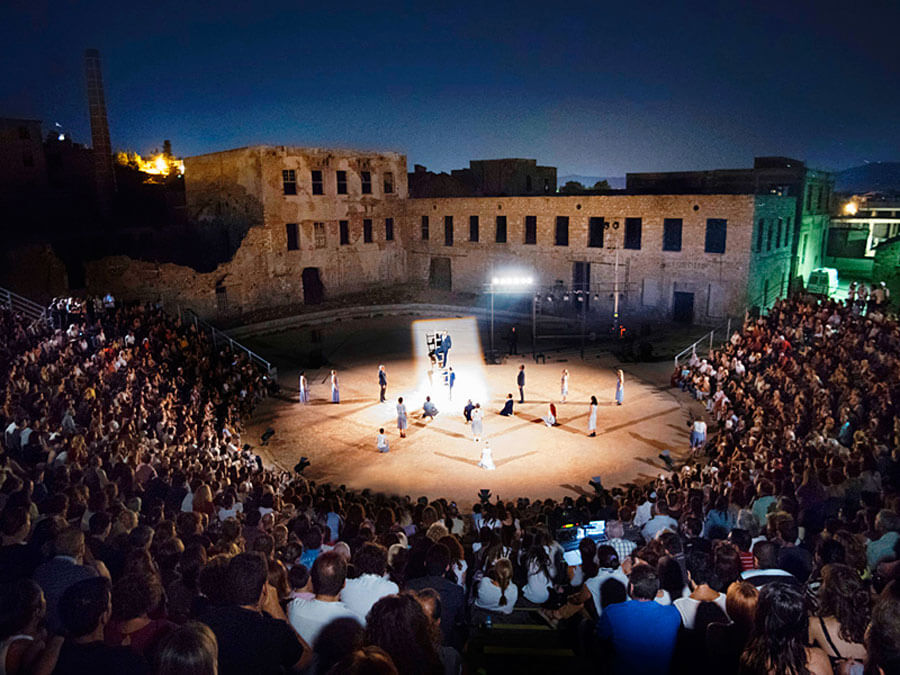 5. The port of Eleusis is known as the graveyard of ships

The naturally-sheltered port of Eleusis is one of the most important ports in the area of Attica. Its picturesque bay, protected by all sides and favored by the weather, has literally dozens of shipwrecks! Submerged, half-submerged or with anchors ready to be cut and one step before disintegration, one can find everything: containers, tankers, yachts, boats... anything you can think of. Among those ghost-ships, there are even historical ships. The most famous example is the EVGENIA P, a ship that began its "career" in the glory of World War II as it was used in the Normandy Operation Overlord in 1944! 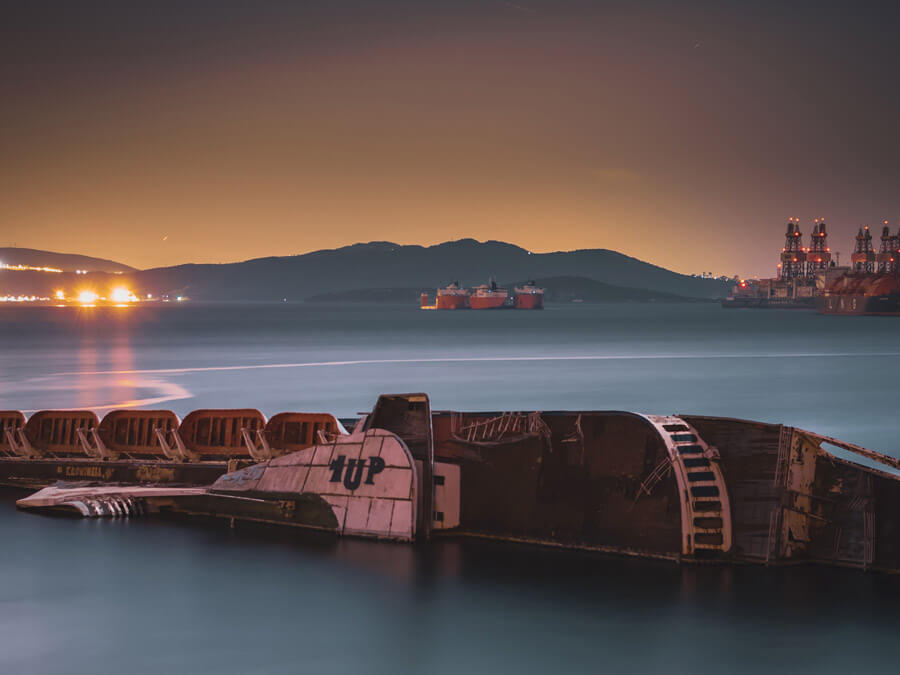 6. The mystical cave of Eleusis

Located inside the archaeological site of Eleusis, there is a cave where, according to tradition, Hades, the god of the Underworld, appeared. It is located next to Ploutoneion, a sanctuary dedicated to Hades, the remnants of which are still visible today. Some say that it was an entrance to the Kingdom of Hades. It has been associated with the myth of Persephone's abduction and her return to the world of the living. If you go closely you might see pomegranates at the edge of the cave. These are offerings from people still practicing the ancient religion of Dodekatheism. You can indeed feel special energy at this place. Stand still, close your eyes and try to resist the temptation of taking a step back, after picturing Hades coming through the cave to take you to the Underworld… 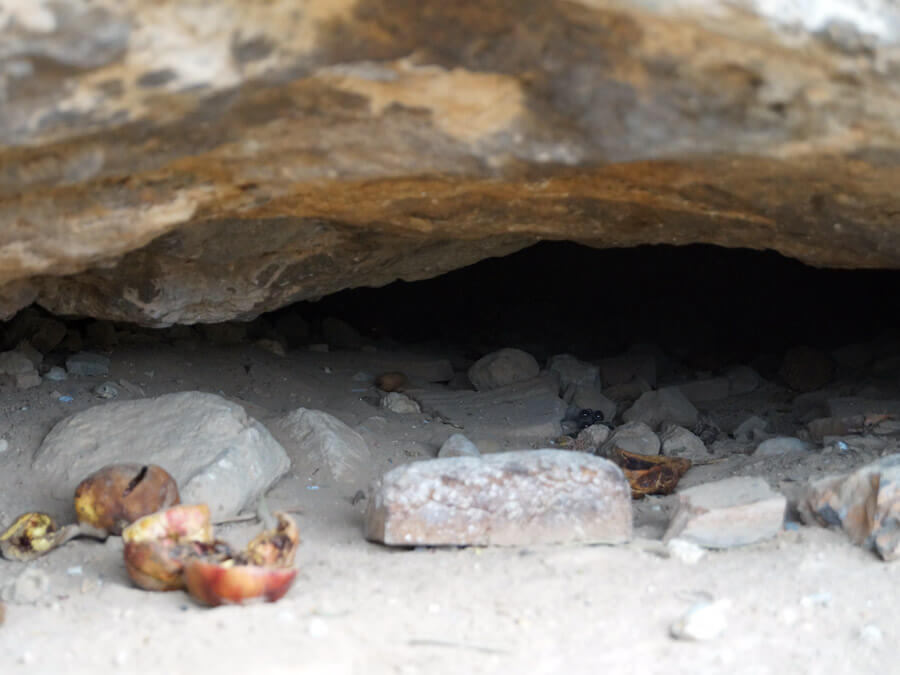 7. The industrial revolution of Eleusis

Eleusis is nowadays a modern industrial site near Athens. Nevertheless, it manages to maintain a deep relationship with its cultural past and importance. A relationship that transforms it into a producer of culture. The once sacred city of Greece fell into obscurity after Christianity took over. But Eleusis continued to exist as a village of farmers, fishermen and raisin collectors. At the end of the 19th century, the town turned into an industrial city, developed with the help of the great transportation works of the era, the railway line and the Isthmus of Corinth. The first Greek cement factory was founded in Eleusis, as well as the first paint industry in Greece. The locals started to produce wine, alcohol and brandy, using raisins as a raw material. In the early 1930s, three pottery factories were working. Τοday, there are five inactive industrial sites saved in Eleusis, with the Old Olive Oil Factory to be an open space of creation, especially for art groups and installations! 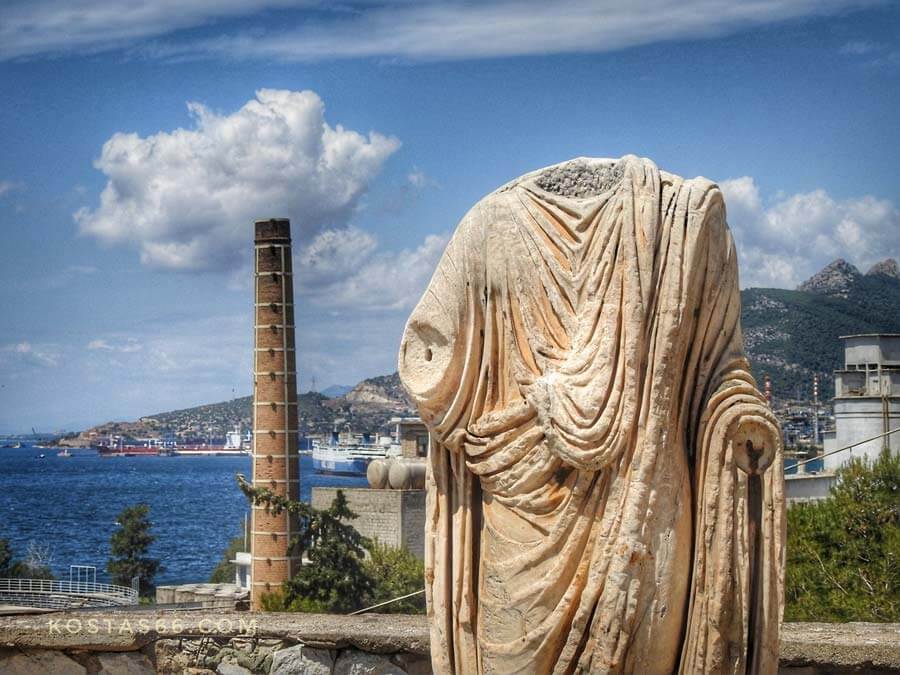 8. Eleusis’ vibrant pedestrian path and the view over the sea

Eleusis is a place of archaeological and industrial importance. Its local vibe of rustic country-side is vivid. After playing Indiana Jones in its archaeological site and mystic paths, the vibrant pedestrian path across the site is ideal for a relaxed afternoon with your friends and family. You will find spread tables on the street and the taverns will serve you tsipouro, raki, ouzo or wine from small producers across Greece, accompanied by traditional Greek meze! On the other hand, the old-school fish taverns are a little further away at the marina and they are all you need to enjoy fresh fish and seafood by the sea. Do your shopping in the central shopping area, which offers a multitude of options, and when the night falls watch a movie under the stars in the city’s open-air cinema! 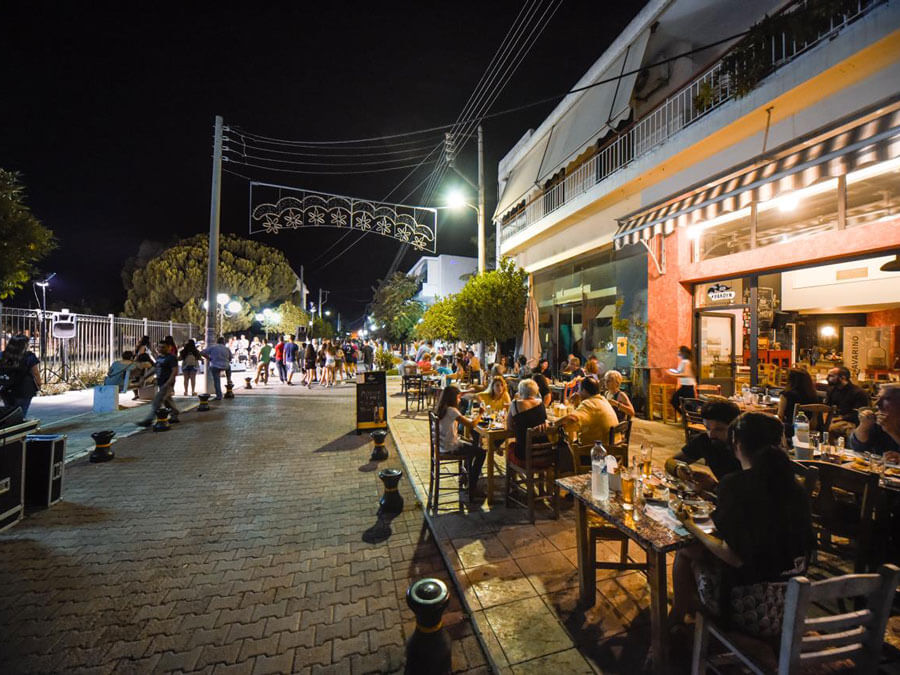 9. Τhe reenactment of the Great Procession

In 2021, the past will come to life! One of the cultural activities in the context of the celebration of the Eleusis’ anointing as the European Capital of Culture will be the reenactment of the Great Procession of the Eleusinian Mysteries. The procession will start from the Kerameikos site in the heart of Athens. It will follow the Sacred Way and will end 23km later in the Eleusis site. Anyone can join, so if you are visiting Athens during that period make sure to be there and spend a wonderful day becoming part of ancient Greek history and culture. 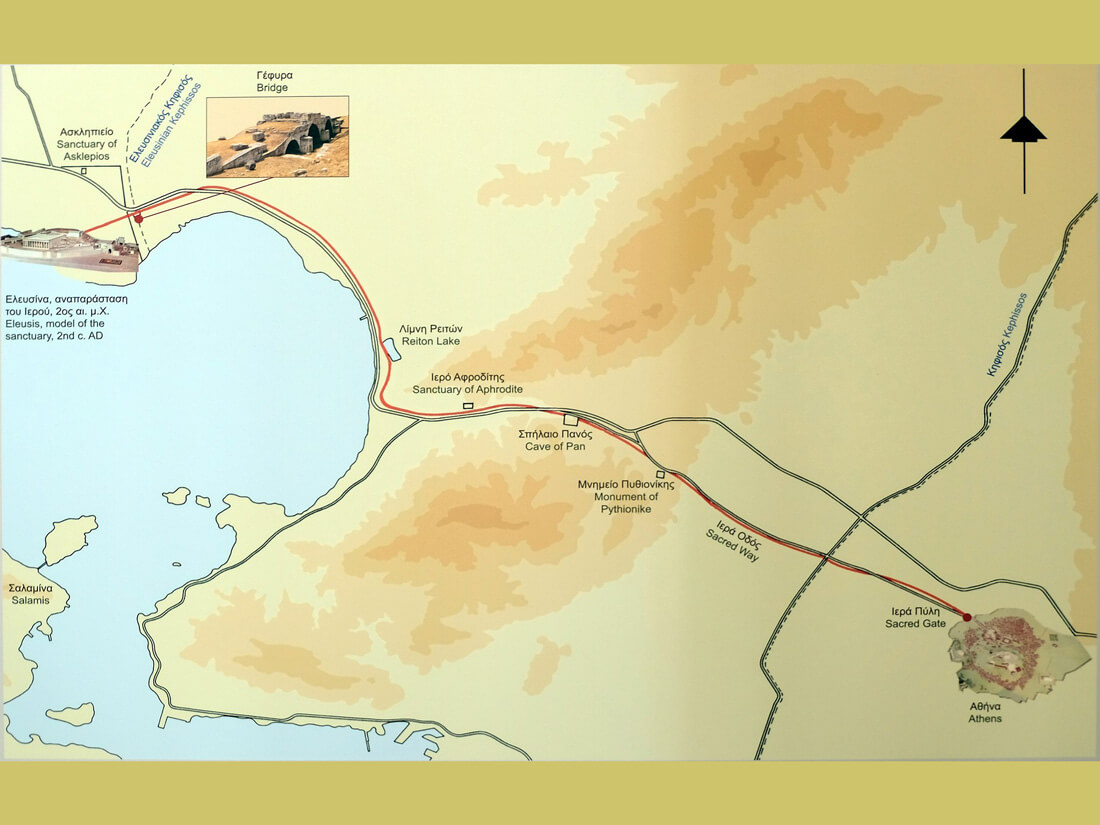 Note: The European Capital of Culture is a city designated by the European Union for a year, during which it is given the opportunity to present its cultural life and cultural development. Many European cities have used the year of the cultural city to completely transform their cultural base and therefore their image in the international arena. But did you know that everything started here in Greece? Melina Mercouri, a former Greek performer and actress became Minister of Culture and she was the initiator of the institution of the European Capital of Culture! Athens was the first European city to be anointed, beginning this cultural journey back in 1985.

If you are visiting Athens, you can take a half-day trip and enjoy a private guided tour in Eleusis, trying to unlock the Eleusinian Mysteries with a local expert guide. To discover more regarding the anointing of Eleusis as the European Capital of Culture 2021 and the events that will take place, visit the website Eleusis 2021. If you are interested, you can also read about more mysteries of Ancient Greece.

Greek Mythology Books you need to read (for adults & kids)
Best Places to Eat in Athens - Food Guide (by Locals)
Merry Belly! Authentic Greek Christmas Meal (with recipes)
Hercules: The Life and Labors of the Greek Hero
One day in Athens: How to make the most of it
The Greek Gods: Full List and Background
Athens in October: Reasons to Visit Athens This Month
The Parthenon: 10 Surprising Facts about the Temple
Creating your Dream Vacation with Tailor-made Tours in Greece
Day Trips from Athens - Where the Locals Go
Caryatids: The Daughters of Athens
Monastiraki: Complete Guide and Things to Do
The Buried Rivers of Athens
300: Movie Vs. Reality
Athens Cultural Highlights Off The Beaten Path
Athens City Break For Foodies
6 Greek Myths to Know Before Visiting Athens
10 Landmarks and Monuments You Should Not Miss in Athens
Greece from Home: 10 Ideas for a Virtual Athens Tour
Books on Greek Food and Culture That We Love
The Apple of Discord and the Fairest of Them All
20 Most Famous Greek Mythology Movies
The Panhellenic Games of Ancient Greece
Basic Greek Words to Know Before Traveling to Greece
Interview With a Local: Ancient Greek Rituals and the Alternative Athens
The Delphic Idea
Meet the Olympian Gods
The Great Plague of Athens: Lessons from the Past
Best Walking Tours in Athens, Magical Walking Routes
Private Tours in Athens: The Benefits of Booking in Private
Acropolis Tour: Why a Guided Tour is Necessary
Battles of Ancient Greeks That Shaped Western Civilization
The Best Places to Enjoy Vegan Food in Athens
9+1 Unique Things to Do in Athens this Summer for Free
Interview With a Local: Athens Through the Prism of Art
The Role of Greek Mythology in the Creation of Athenian Wonders
Mysteries of Ancient Greece You Didn't Know About
10 Reasons Why You Should Join a Food Tour in Athens
Top 10 Alternative Destinations in Greece
The 10 Best Places to Visit in Greece
10 Sights to Tour in Athens and Bring Greek Mythology to Life
Top 10 Tips to Know Before Traveling to Athens
10 Things to Do in Delphi Home to the Oracle of Apollo
Symposia in Ancient Greece: Reviving the Ancient Custom
30 of the Most Famous Tales from Greek Mythology
Interview with a Local: Greek Neoclassicism and the Unseen Athens
10 Things you didn't Know about Ancient Greeks
48 Hours in Athens: Full Itinerary by Locals - Greek TravelTellers
10+1 Traditional Greek Foods and Drinks to Try when you Visit Greece
10+1 Things to Do in Athens on a Rainy Day
Alternative Things to Do in Athens: Getting Off the Beaten Path in the City of Wonders
Christmas in Athens: Top Things to Do and Know
December in Athens: 4 Reasons why you Should Choose this Month for your Greek Getaway
Interview with a Local: Greek Gastronomy and Athens for Foodies
10+1 Things to Do in Athens to Time Travel to Ancient Greece
How to Travel in Greece Differently: a Guide for Delving Deeper into the Greek Culture